How does the all-new Tata Tiago compare to its biggest rivals the Maruti Celerio and the Hyundai i10? Well read on to know more... 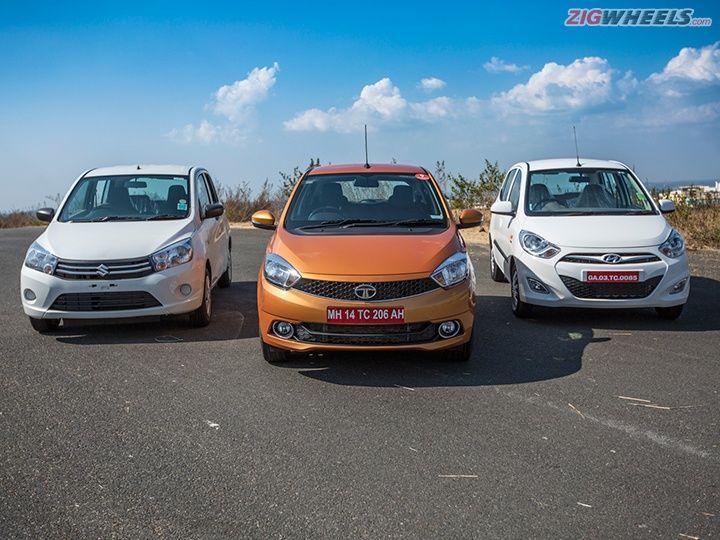 The Tata Tiago is the newest hatchback on the block and it will not have an easy run as it will go straight up against two successful cars from India’s largest auto manufacturers, Hyundai with its i10 and Maruti and its Celerio. Lets get straight into it then.

Let us start with the oldest car amongst the three here, the Hyundai i10. We have had the i10 for years now and in all its time, this little, almost egg shaped hatchback has grown to be a fan favorite amongst the entry level hatchback buyer in India. With its cute proportions that have just the right amount of aggression the i10 isn’t a bad looking car.

That said, compare it to the likes of the Celerio that takes a similar tallboy approach to design but makes everything appear more aggressive, the i10 does seem a little plain. Continuing on the Celerio, Maruti did successfully replace two of its cars in one shot when they introduced this new car and it seems to have worked quite well. The edgy design does work well in this segment and the Celerio has it in spades.

The Tata Tiago on the other hand is a very different take on entry level hatchbacks. The new Tiago for example is a mixture of a conventional hatchback proportion like the old Indica was and the new age tall boy design like the i10 and the Celerio. And this balance is where it really starts to look appealing with its sporty design and aggressive low stance. All in all, although the Celerio and the Tiago are both good looking cars in their own right, the Tiago does win this battle by a slim margin.

The Tata Tiago, the Maruti Celerio and the Hyundai i10 approach interior design in different ways. For starters, the Celerio and the i10 are both available with a beige interior color palette whereas the Tiago is only available with a black interior. Now although we know that the average Indian audience loves the beige interior, we applaud Tata’s efforts to break the norm and offer a grey and black interior. The fit and finish on the Hyundai despite being the oldest here is still commendable but the Tiago is a long way ahead when it comes to that department. All three cars also come with Bluetooth enabled infotainment systems which lets you pair your phone but the Tiago gets the added benefits of an app based navigation pairing that worls rather well.

When it comes to space, the Tiago again trumps the Celerio and the i10. Rear leg space is certainly a good percentage more than the rest and so is the shoulder room. The Tiago does slightly suffer when it comes to seat comfort due to its narrow seat bottoms that do not offer great under thigh support. The Tiago is also slightly low on headroom on the rear that the Celerio in particular has in spades. Coming to the boot, the Tiago with its 245-litre boot trumps cars like the Bolt too so it has no real problem taking on the likes of the Celerio and the i10

The three cars here all come with petrol engines of different displacements. Lets start with the largest, the Tata Tiago. The Tiago gets a 1.2-litre 3-cylinder motor that makes 85PS of peak power and 114Nm of peak torque. Sadly though, although the most powerful on paper, the engine does have a long way to go when it comes to sheer refinement. Yes, the engine is rev happy but there just seems to be holding back performance that it could easily put down on the road. The Hyundai i10 on the other hand gets a 1.1-litre engine that makes 68PS of peak power and 100Nm of torque. As with most Hyundai engines, this one too hates being pushed and much rather prefers a more sedated driving style. Throttle response too is much more relaxed and the i10 does leave a lot to be desired in terms of sheer performance.

Now to the Celerio that comes with the 1.0-litre K10 engine that also makes 68PS of peak power but only 90Nm of peak torque. With the K10’s free revving nature and equal power through the rev range, the Celerio is still the most involving and fun car to drive here from an engine standpoint. We particularly love how the Celerio’s gearbox (in manual guise) feels as really crisp with short and precise throws.

Do not expect either of these cars to scorch a race track. That said, it is surprising how well most modern cars can be made to handle if their corresponding manufacturers want them to. Lets start with the softest one of the lot and as expected, it is the Hyundai i10. Now although the i10 doesn’t have a spool of cotton for shock absorbers, it does feel quite soft and disconnected. As with most Hyundai cars, the i10 is great though to drive around a city with its uber light steering. The Celerio is much better when it comes to ride and handling as compared to the i10. Maruti has always made cars with great balance and it does show. The Celerio may not be as balanced as the Swift is, but it certainly is fun when it comes to going through corners. There is a bit of body roll but as most customers of this segment care more about ride quality, that department too is well sorted with a ‘not too hard but not too soft’ balance.

The Tiago when it comes to the handling department though is far far ahead of the other two. In fact, as we mentioned in our review, the Zica even out handles the Bolt. Ride quality too is great and the Tiago does not have the kind of vagueness that the Indica used to have. All three cars also come with ABS optional or standard in most variants and all of them showcase an almost similar braking feel.

The Maruti Celerio (manual gearbox) starts at Rs 3.97 lakhs for the base variant with prices for the ZXi (with ABS and airbags) at Rs 5.03 lakhs. The Hyundai i10 starts off a little expensive at Rs 4.20 lakhs but is cheaper on the top of the line variants priced at Rs 4.72 lakhs. The Tata Tiago though surprised us though by undercuttong both these cars (considerably) with prices starting at Rs 3.20-4.75 lakh for the petrol variants making it the best value for money product in its category. (all prices are ex-Delhi). Coming to fuel economy, the Celerio returns 23.1kmpl which is much higher than the Hyundai i10’s 19.81kmpl. The Tata Tiago however trumps both with 23.84kmpl for the new petrol engine making the Tiago a winner in this section too.

So should you buy the tried and tested Hyundai, the popular Maruti or take a chance with the Tata Tiago? When it comes to sheer product, the Tiago is a winner in this comparison test with better road dynamics, a great looking exterior and of course, the best interior in its category. If Tata Motors stepped up to the line with the Zest and Bolt last year, they have clearly upped their game up by an even greater margin this year with the Tiago. And we think the new car will not only do well for Tata in terms of sales figures but will also boost the brand image of the Tata brand in general in the eyes of the Indian audiences. So, if it is our expert advice you seek, we would certainly put our money and our bets down on the Tata Tiago. That said, we still expect the Maruti Celerio to outsell the Tiago in the market because of Maruti's extensive sales and service support.