If you desire to step into the world of German luxury automobiles why settle for a small sedan or a hatch when a compact SUV can be had for less than 10% more? 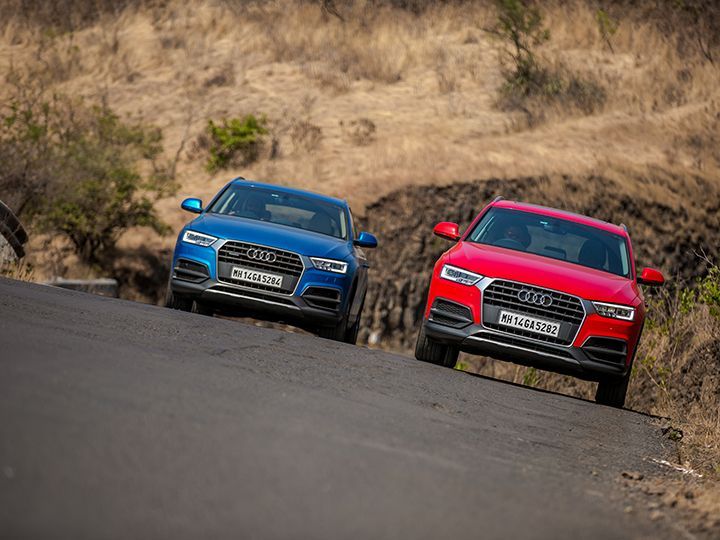 When it was launched in 2012 the Q3 was Audi’s shift in focus from distinguishing itself in a new market to boosting its sale numbers and targeting a new, younger customer over your regular 45+ something Indian millionaire/billionaire. At just a couple of lakhs over the price of the entry level A3 sedan, the Q3 still isn’t far away from the entry ticket (A3 sedan) into the Ingolstadt marque’s luxury club. It’s been facing some stiff competition from the BMW X1 and the GLA of late and the next generation update is still about a year away.  Can a new frugal petrol engine, and an also new, frugal and more powerful diesel mill encourage you to put your money on the four-ringed contender?

Visually, the Q3 hasn’t changed much since it saw the light back in 2012. A facelift in 2015 gave it a new grill and headlights but this update is much harder to spot. The all-LED headlights and tail lamps are now joined by a mildly redesigned bumper and some new plastic cladding. And there’s also the new dynamic turn indicators that are working their way into the entire Audi range. And that’s really it as far as the cosmetic changes are concerned this time around.

What should make more of a difference are the two new engines in the range. The new 1.4-litre 150PS TFSI engine from the A3 and the A4 has found its way into the Q3. It should be interesting to see how this petrol behaves in the larger, heavier Q3. Although all these are front wheel drive machines, the Q3 uses a 6-speed dual-clutch gearbox, whereas its siblings use a seven-speed unit. The diesel Q3 is offered in two variants: one 150PS tune driving only the front wheels, while the other, more powerful 184PS tune will sport Audi’s famed Quattro badge and four wheel drive. It is this 35 TDI version of the diesel burner that we had on test along with the petrol 30 TFSI.

The interiors see no change, with Audi waiting for the full update to make major changes to the Q3. Despite that the Q3 still feels properly rich and lavish in terms of materials and build.  But the design is starting to show its age, especially so when you compare it to its siblings. On some fronts where Audi has led the charge earlier, the age is hard to miss. For instance, the display screen on the top of the dash feels small. We also noticed that the resolution of the small information screen in the centre of the instrument cluster in the lower specced 30 TFSI is also from a time long past. We’re also now used to the new circular air con vents that are part of the new Audi look, and the old rectangular black slats also add to the ‘been there seen that’ feeling.

The aging looks aside, the space is well thought out and practical and actually features the largest boot in its class. You pay for this extra boot space with passenger space. While the Q3’s rear bench is easily usable for two adults, it won’t feel ultra-spacious.

The high transmission tunnel also makes the Q3 better at dealing with four adults rather than five. While space is at a premium the luxury can’t be questioned, with leather seats and electronic adjust for reach and height on all trim levels. The front seats are comfortable and supportive up front but a little on the firmer side on the rear bench.

The new 1395cc petrol engine in the Q3 throws up a few questions. The most obvious of which is one of perception. Could a 1.4-litre engine more commonly seen in small sedans power an SUV? The simple short answer is ‘Yes, it can.’ The longer answer is that, having spent a number of kilometers behind the wheel, we’ve come to realise that it does have some faults but you never feel that it’s underpowered, so to speak. It’s also hard to call a 150PS engine ‘underpowered,’ so we won’t, but it’s the way it delivers that turning power that’s not altogether pleasant. It’s not the most linear engine and the bump up in torque when the turbo kicks in really gives it a diesel-like character. Pottering around town, everything is fine but you do feel the lack of punch below 2000rpm. It’s much happier over 2500rpm with the real sweet spot around the 3000rpm mark. Audi haven’t equipped this Q3 with paddle gear shifts and we think this is a miss. The petrol is really happy chasing revs when on the move and the paddle shifters would really have helped keeping the engine in its sweet spot. It’s also quite audible in the cabin at idle and this thrummy note increases as the revs rise. It’s never unbearable but is not something you’d expect from a petrol engine in a luxury SUV.

As can be expected it’s not the quickest and in our 0-100 test run it clocked a ho-hum 10.91s. The flip side of that coin is that despite not featuring the more efficient cylinder deactivation technology that’s present in the A3 and A4, it still manages very competitive mileage figures. In the city we managed 10.24kmpl and out on the highway we managed 14.56kmpl.

This is the engine and transmission combination you should put your money on. The diesel mill feels both more refined and linear than its petrol counterpart. There’s loads of usable torque at low revs and it's delivered consistently in a linear fashion. It feels quite similar to the old engine and that’s not exactly a bad thing as the previous 2.0-litre was quite nice too. It’s also similarly efficient as well, delivering numbers of 12.48kmpl in the city and 18.5kmpl on the highway.

Audi has equipped the more expensive 4x4 35TDI with paddle shifters for its 7-speed S tronic gearbox  and while they are a nice addition, this engine with its broad spread of torque hardly needs them. We didn’t use them in town or in our drives on the highway and we even didn’t use them on our performance run, for which Sport was enough. In said performance test the diesel completed the sprint to 100kmph in 8.26 seconds, completely overshadowing its petrol counterpart.

Audi has equipped both cars with its ‘Drive Select’ mode button with ‘comfort’, ‘auto’ and ‘dynamic’. These modes change the throttle and steering response and the gearbox responsiveness. The changes are quite subtle though, and mostly the only thing you will notice in Comfort mode is that the steering is a little lighter than in Dynamic mode. Comfort leaves the steering even lighter and though this makes maneuvering in traffic or parking really easy, we prefered the slightly firmer Dynamic mode.

The ride quality of the Q3 is on the firmer side when compared to its silky smooth Q brethren – the Q5 and the Q7. That said it’s still perfectly composed over any obstacle you will encounter in town. From small to large bumps you remain quite isolated and comfortable. There is also very little vertical or lateral movement from uneven surfaces too. There are some differences in the way the petrol and diesel behave on the road and out on the highway the petrol tends to feel a little flighty, due to some unnerving bouncy vertical movement at high speed, and this may be down to its lighter kerb weight; the diesel on the other hand with a heavier kerb weight and four wheel drive is unsurprisingly more planted on the highway.

The steering is quite light and this is excellent when navigating through city traffic and parking in tight spaces, but when you up the pace through a set of corners you’ll soon find it lacks any feedback. The chassis is quite nice when pushed, with the suspension handling any challenge our bumpy roads care to throw its way. There is a little bit of body roll when you push the car but this too is controlled and soon you can learn to trust the front and let the suspension handle the rest. The petrol engine with its gruff rumble and desire to rev is quite nice when your evil twin shows up behind the wheel, but it’s again let down by the lack of pedals that would have allowed better use of the gearbox while keeping both hands on the wheel. The diesel with its smooth spread of 380Nm of torque is again the more fun of the two even when you’re hooning around.

With the introduction of the new petrol engine and by skimping on some features like a reverse parking camera, paddle shifters and the higher resolution instrument cluster screen, Audi has managed to keep the low entry price for the Q3 range similar in the hopes of attracting a few more buyers. But really the pick of the bunch is the new diesel. It’s a much more pleasant driving experience, is quattro equipped and also doesn't skimp out on features that the petrol misses.

If you feel that the badge on the car is worth sacrificing some creature comforts for, and you’re sure you will never feel the urge to mash that throttle pedal, and with no one wiser that your pride and joy is slightly lacking in displacement, the petrol (five lakhs cheaper than the diesel) may make enough sense.