We finally spend some time with the Volkswagen Ameo compact sedan. Here is an in-depth preview of the German manufacturer’s new compact sedan for India, which will be launched later this year. 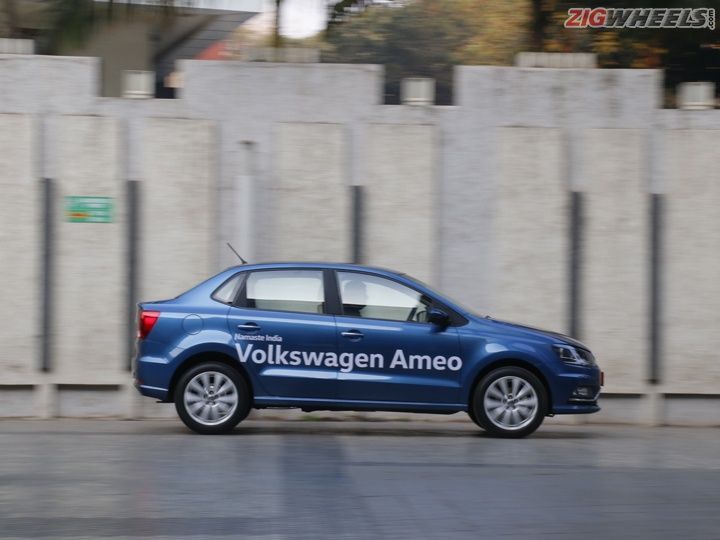 The compact sedan market is exploding with every manufacturer that matters putting their best products forward. Maruti, Hyundai, Ford, Tata and Honda have one offering each and by the end of this year Tata Motors will add yet another compact sedan to their product lineup. Not to be left behind, Volkswagen has finally decided to step into this segment and introducing their latest compact sedan, the Ameo. And we spent a good part of a day with it to touch it, feel it and tell you all about it.

So lets begin with a detailed look at the exterior. A fair few people have criticized Volkswagen for playing it too safe with the design of the Ameo and we agree. The new Ameo form the front still has the handsome looks that made the Polo such a loveable car. In fact, the new Ameo is identical to the Polo and gets the same grille, the same headlamps and the same bumper as the Polo gets. And the story is pretty much the same with the way the car is styled till you reach the C-Pillar where the boot section sprouts.

Now, the Ameo does look a lot better than most of the other sub 4-meter segment cars. That said, just like every other car in this category, the Ameo looks weird with the boot fused on the way it has been. In fact, when you look at the car from the dead rear, the boot looks lifted straight out of the likes of the Octavia or Rapid. If you can really equate the bootlid to a car from India’s past in terms of flatness, it would probably be the original Baleno and that isn’t a good thing. As much as I dislike chrome on modern cars, this is one of the few times where a large chrome piece on the bootlid connecting the two tail lamps would have made the car look a lot lot better.

All said and done, the Ameo does have one thing going for it: Stance. Even with the stubby boot, the car seems to sit quite well, especially on the 16-inch wheels that the car we were given was wearing. Not only do these split 5-spoke wheels looks great, the large wheel and tyre combination really helps fill the wheel arches well. However, if rumors are to be believed, the production version of the new Ameo will mostly have 15-inch alloy wheels.

So lets move to the interiors. Well made, as expected, is one of the first things that come to mind when you step into the Ameo. We are disappointed with the fact that the Ameo still gets a cloth interior and no leather option, but the leatherette wrapped steering wheel combined with the relatively high quality plastics do make you feel special. The Ameo also features a black and beige dashboard and door panels along with a silver central console that encapsulates the AC vents and the touchscreen infotainment system.

The infotainment system itself is a new one too and is very good both in terms of touchscreen harware and the user interface. In fact, we can definitively say that this is the best touchsreen navigation unit below the Rs 11 lakh price bracket. The Ameo also gets automatic climate control setup in the top of the line version along with a standard knob based setup in the lower variants.

The front driver’s seat offers height adjustment and the seat itself is very comfortable once you set it to your desired height. The rear seat does offer an airy experience mainly because of the fact that unlike any other car in this category, the Ameo gets a rear quarter window. Sadly, even though the Ameo gets rear AC vents, the new compact sedan does not come with a flip down handrest at the rear which could be quite irksome to some. The rear seat is also slightly short on under thigh support, which we assume has been reduced to improve the legspace.

And speaking about legspace, the Ameo just isn’t as spacious as the likes of the Honda Amaze and the Ford Figo Aspire but definitely a lot more spacious than the Polo. The boot too is quite large and the rear seats fold down in order to give you a larger storage area.

Other features in the Ameo will include things like steering mounted audio and telephone controls, a Bluetooth enabled infotainment system and electronically adjustable outside rear view mirrors. The new Ameo will also gets ABS and airbags as standard in every single model just like the Polo and the Vento do. Other safety features will include ABS braking and EBD.

Expect more details on how the new Ameo is like to drive both in terms of engines and also in terms of ride comfort and handling when we drive it in the near future. If the rumor mills are to be believed, the Ameo will be priced between Rs 5.5-8.5 lakh (ex-showroom) and will hit showrooms in the next three months or so. All said and done, although the Ameo will be a love-it-or-hate-it type of car in terms of the way it looks, expect it to give the best driving experience of anything else in its market and price range.