Let the new nomenclature not confuse you. This is the luxurious Audi A8L, powered by a mighty 4.2-litre V8 diesel motor. Audi A8L 60 TDI review at Zigwheels.com 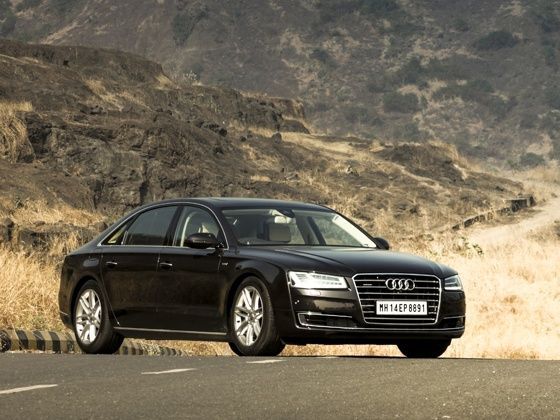 Affluent people will buy luxury saloons ‘coz they can afford it, right? But the Audi A8L 60 TDI is different. It’s crafted for a rare breed of connoisseurs, who not enjoy being pampered but also love the thrill of getting behind the fancy wheels to feel the tarmac shredding 4.2-litre V8 oil-burner. There are not many diesel cars in this snooty segment that can boast of a 0-100kmph time of less than 5 seconds.

The Audi A8L 60 TDI looks no different from the more popular, smaller engine version we drove a few months ago (Also read: Audi A8L 3.0 TDI review). It’s just the ‘V8 T’ badge on the front fenders and Audi’s new found nomenclature fascination which christens the car as ‘A8L 60 TDI’ — disclosing the bigger engine under the bonnet.

The recent makeover has added a dash of panache to the Audi A8L and adding to the bling, is the unmistakeable Matrix headlights, which however, is an optional equipment. There aren’t many changes on the side profile as compared to the older A8, except the fact that it’s grown by 13mm in length and sports a new set of 18-inch 7-spoke alloy wheels. A fleeting look at the Audi A8L 60 TDI rear end will reveal new taillights with Audi R8 style indicators and a pair of flush finished exhausts on the restyled bumper. The new A8L is a good looking car, which with its understated styling doesn’t scream for attention, but looks imposing enough.

The cabin of the Audi A8L 60 TDI looks even better than the exterior design. Unlike competition, the driver’s seat on the Audi A8L 60 TDI is as important as the ones at the back. It’s large and can be adjusted to get the perfect driving position. In fact, our test car was also equipped with an optional massaging seat for the driver. It almost feels like a spa in there.

Complimenting the powerful V8 is a leather-wrapped multifunctional steering wheel which comes with a set of shift paddles. The driver also gets a heads up display, so there’s no need to take the eyes off the road while driving. But the view from the driver’s seat isn’t the best due to the beefy A-pillars, large outer rear view mirrors and a sleek rear windscreen.

Music buffs get a Bang & Olufsen music system, which comes along a large MMI screen. You also get a plethora of buttons on the centre console for quick access, a fancy yacht-inspired gear selector and even a convenient touch-pad.

With the bigger engine, Audi offers the India Edition A8L 60 TDI with the Audi Exclusive package as standard, which includes this classic cream and brown perforated leather upholstery and matt brown wood inlays. It’s practically draped in the finest leather from the headlining to the seats, along with parts of the dashboard and door panels, and the never ending centre console that begins from the dashboard and merges in to the rear seats.

Equipped with the optional ‘Rear Seat Executive Package’, the all-important back seat passengers get customised folding tray, dedicated infotainment screens, Cardan reading lights and a vanity mirror. Apart from this, they also get dedicated controls for media and air-conditioning.

Being a long wheel base version, the A8L 60 TDI offers impressive carpet area, along with sofa like rear seats with reclining backrest. As an option, one can also get a footrest and massaging function to make the journey plusher. The ceaseless list of features include soft close door, panoramic sunroof, the very useful surround view cameras, Auto Park Assist and the option of creating in-car WiFi hotspot.

Though the new Mercedes-Benz S-Class with its uber grand interiors has raised the bar in this segment, it’s the hundreds of customisation options along with Audi’s unparallel craftsmanship, that help the A8L make a mark for itself.

Now to the part that makes Audi A8L 60 TDI stand out in its segment. Hidden under the hood is a beastly 4,134cc diesel engine equipped with direct injection and VGT twin turbochargers. After the makeover, the power output has been bumped up by about 35PS to 385PS produced at 3,750rpm and an astronomical 850Nm torque, which is 50Nm more than the outgoing model. And to manage all that torque, the powerful V8 comes mated to a smooth shifting ZF sourced eight-speed triptronic automatic gearbox. Also, standard is Audi’s quattro permanent all-wheel drive with Sports differential and Electronic Stabilizing Control (ESC).

Thanks to the extremely well insulated cabin and the peak torque gushing in between just 2,000-2750rpm, the engine is hardly audible while idling, and can be mistaken for a petrol mill. On the go, the power delivery is silky smooth and the V8 propels the 5.2meter car effortlessly. From puttering around the city at 60kmph to cruising on the highway at three digit speeds, the Audi A8L 60 TDI obliges with élan.

Shifting to a more aggressive setup Dynamic mode and using the steering mounted shift peddles, the drive becomes pleasingly sporty. In fact, driving the car with nonchalant abandon, we managed to propel the 2,095kg car from 0-100kmph in just 5.3 seconds, which is surprisingly close to the company’s claimed 4.9 second time.

Complimenting the scorcher of an engine is the Audi A8L 60 TDI’s ride quality. Now with the tweaked suspension setup and relatively high profile (235/55 R18) tyres, the luxury limousine offers great low speed ride. The test car came with adjustable suspension, steering, and as I mentioned before, a sports differential, which one can customise the car’s dynamics as per the driving need.

In ‘Comfort’ mode the A8L 60 TDI irons out most of the road imperfection, while shifting to ‘Dynamic’ mode stiffens the suspension and steering and wipes off the faint wallowing seen in cars of this size. The tyre profile also helps the air-suspension to ward off road undulations and it’s just bigger impacts that filtered through the otherwise tranquil cabin.

When it comes to cornering, the quattro gives the Audi A8L 60 TDI unbelievable grip around fast corners. It gives the driver enough confidence to go faster on turns, and you’ll know exactly when to ease off, since the tyres raise the alarm as you approach the limit.

But despite its weight and size, the A8L is impressively manageable on the road, and there’s always a sense of control even at high speeds. The electro-mechanical steering is also an improvement and is fairly communicative. But as the car gains speed, one can feel the artificial weight instilled in it. It’s a small compromise for an overall good package, since it’s easily more fun to drive and offers the right amount of comfort and opulence, as compared to most of its competition.

The 60 TDI can also become your plush touring car as it comes with a massive 82-litre fuel tank and efficiency of about 12kmpl on an average, giving it a range of over 900km per tank full of fuel. In Mumbai the Audi A8L 60 TDi is price at Rs 1.25 crore (ex-showroom) which is roughly Rs 12 lakh more than the 3.0-litre TDI equipped Audi A8L. So, only if you fall in that rare breed of enthusiasts that does take on the wheels once in a while, then it’s money well-spent. Otherwise, it’s better to buy the regular A8L which is equally good in all aspects.