Mercedes-AMG’s Project One Hypercar Is Human Ambition On Wheels 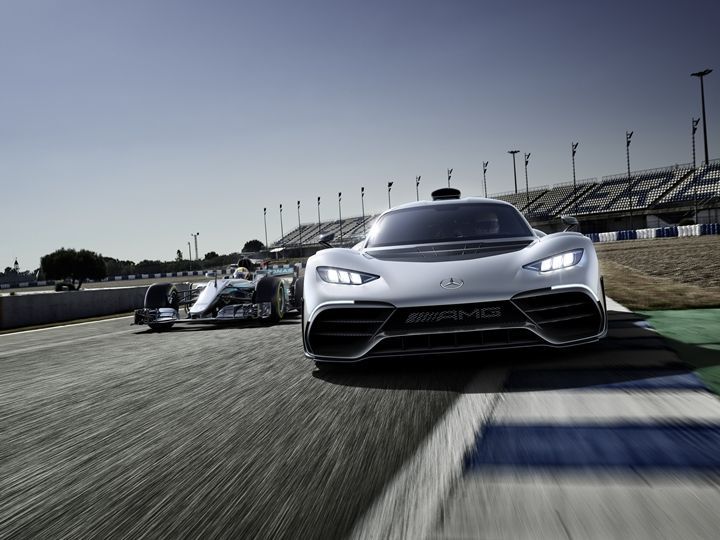 Dear Indian, worried about buying a car that displaces over 2000cc? Mercedes-AMG has THE solution for you. It’s fast, it’s efficient (well, thermally), it’ll cost you your dignity (plus taxes) and it’s called the Mercedes-AMG Project ONE.

Having teased us with a, uh, teaser in January this year, the hypercar has finally made its public debut at the ongoing 2017 Frankfurt Motor Show. The design isn’t all that outlandish. It’s not the punch-you-in-the-throat startling CLK GTR but it sure is a looker and even gets doors that open conventionally and upwards. Also, there’s definitely some McLaren F1 to that face. Coincidence? Well, a happy one since what we’re looking at is the first ever road legal car to feature a Formula 1 engine!

In all this excitement, we tend to forget things. So here’s a disclaimer: this is a concept that previews a production car, not the final car itself. That said, when you’re in this price territory (€2.2 million/over Rs 12 crore), the lines between the two get blurred.

The Project One celebrates 50 years of AMG by being the epitome of the brand’s latest trend – downsizing. Its 1.6-litre, V6 petrol engine with direct injection and an electrically assisted solo-turbo comes directly from the Mercedes-AMG Petronas Formula 1 racing car and sits just ahead of the rear axle. Yes, it’s mid-engined and the ICE is accompanied by 4 electric motors. One has been integrated into the turbocharger, another has been installed directly onto the combustion engine with a link to the crankcase while the two remaining motors drive the front wheels.

The end result is a combined system output of approximately 1000 horsepower, a claimed 0-200kmph (yes, 200!) time of under 6 seconds and a top speed of over 350kmph! Oh yeah, and remember the thermal efficiency bit? It’s over 40 per cent in the Project One vs 33-38 per cent in conventional series production engines. May not sound like much but think of it like getting from 400 to 405kmph in a supercar – small jump, big effort.

The battery cells, their arrangement and their cooling system are, for the most part, a drag and drop from Lewis Hamilton’s favourite go kart. The lithium-ion, high-voltage battery and the DC/DC converter supporting and charging the 12V onboard electrical system are accommodated in the vehicle floor behind the front axle. The front axle-mounted motors are capable of rerouting as much as 80 per cent of the braking energy back to the battery to boost the Project One’s travel range. The thermal efficiency also makes the car more fuel efficient. ARAI figures should be in by the year 8022.

Inside, the Project One is functional and pretty. The bucket seats with adjustable backrests are integrated into the monocoque skeleton and both the pedals and the steering wheel are adjustable to tailor to your driving position. There are two high-res 10-inch displays to read out all the relevant data and the F1 style steering gets integrated LED shift lights. You even get a rear view camera instead of a mirror, since, let’s face it, it’s not like a mirror would show you much.

Mercedes-AMG will make only 275 of these, so unless you’ve received a letter from Affalterbach for a customer preview, best keep an eye on those supercar spotter channels once the production car is out.

The other F1-inspired hypercar will come from Aston Martin. This is the Valkyrie

Not interested in the Project ONE? Here's a cute, smart alternative