The Mercedes-Benz EQA Will Borrow The GLA’s Premium Cabin

That being said, the teaser image reveals some distinguishing bits on the electric equivalent of the GLA 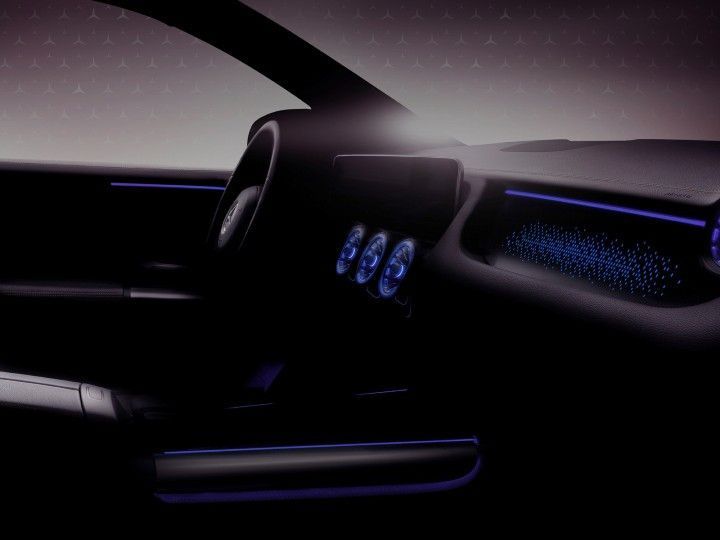 Mercedes-Benz is set for an electric offensive with six new electric vehicles slated to launch by the end of 2022. We’ve already had exterior glimpses of its upcoming offering, the EQA, but the carmaker has now released a teaser of the cabin ahead of its global premiere on January 20. The electric equivalent of the GLA will sport certain distinguishing elements over its internal combustion engined counterpart.

Since the EQA and GLA will utilise the same basic architecture, it's not surprising that the cabin retains the minimalist layout with Mercedes’ trademark twin-screen setup and turbine HVAC vents. But what’s different in the EQA is that the cabin features dark upholstery, with plenty of illumination all over including the HVAC vents.

Detailed features are yet to be revealed, but the carmaker has confirmed a standard Electric Intelligence navigation system. It calculates the fastest route to the destination taking in factors such as range simulations, necessary charging stops as well as numerous other factors like topography and the weather.

Mercedes-Benz has also partly spilled the beans on what’s under the hood of the EQA. It will initially launch the EQA 250 trim which gets a powertrain producing 190PS of grunt. More powerful iterations with up to 272PS and an all-wheel-drive variant will arrive later. As for range, the carmaker has still kept that under wraps, but the concept model is capable of a driving range of around 400km.

Despite heavy camouflage in previous testing images, the EQA’s design is likely to be similar to its ICE counterpart. The main difference could be a revised grille, fancier DRLs up front, and the number plate housing repositioned to the rear bumper, instead of the tailgate.

Back home, Mercedes-Benz has an action-packed roadmap for the year, with 15 product launches. So, the EQA could very well be on the cards for a late-2021 or early-2022 launch in the country.  It will rival the upcoming Volvo XC40 Recharge that will arrive in India later this year.