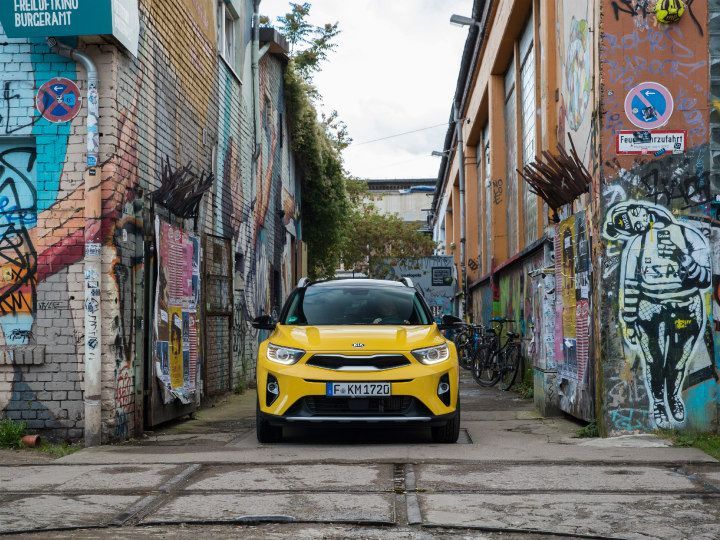 Kia Motors India has been quite busy since the launch of the Kia Seltos SUV, which has set the sales chart on fire. Next up is the Carnival MPV which will be followed by a sub-4 metre SUV that's been codenamed the QYI. It is likely to be based on the Hyundai Venue and has already been spied in the country, revealing Venue-esque proportions, albeit with more Kia design cues. Now, fresh images of the SUV undergoing tests have given us a better look at the QYI from different angles. The images also tell us that Kia could let the QYI borrow some parts from its best-selling Seltos. We could expect the sub-4 metre SUV to make its debut at Auto Expo 2020.

While the test mule spotted is still heavily camouflaged, it does feature similarities to the international-spec Stonic crossover, including its window line and roof rails. The rear-end features LED taillights that not only bear resemblance to the Stonic in their placement but also have cube-like shapes similar to the Seltos. Its wide, flared wheel arches also bear resemblances to the Stonic. Key highlights up front include a two-part headlight design that’s similar to the Venue and a Tiger-Nose grille like the Seltos. The similarities don’t stop there as the alloy wheels also look like the ones seen on the Seltos GT-Line trim.

The interiors are yet to be revealed, but we expect the QYI to be feature loaded, with bits from the Venue as well as the Seltos. Some of the expected features include a touchscreen infotainment with Android Auto and Apple CarPlay, UVO connected-car tech, climate control, wireless phone charger, ventilated seats, cruise control, as well as a sunroof.

Kia is yet to reveal details about the QYI’s powertrain options. But since the upcoming SUV will be based on the Venue, we expect it to borrow the Hyundai’s engines as well. This could include the BS6-compliant 1.0-litre T-GDI engine option.  For reference, the Venue's 1.2-litre Kappa petrol motor develops 83PS and 114Nm while the T-GDi unit develops 125PS and 172Nm. The diesel engine option on the other hand is likely to be a detuned version of the Seltos’ BS6-compliant 1.5-litre CRDI unit.

Expect the Kia QYI to be priced a bit higher than the Venue, which retails from Rs 6.5 lakh to Rs 11.11 lakh. Considering Kia’s announcement to launch a new vehicle in India every 7-8 months, we expect the car to go on sale around the end of 2020. Once launched, it will rival the likes of the Venue as well as the Nissan Kicks, Maruti Suzuki Vitara Brezza, Tata Nexon, Ford EcoSport and the Mahindra XUV300.