Feast Your Eyes On This Carbon-Fibre Goodness From Kawasaki 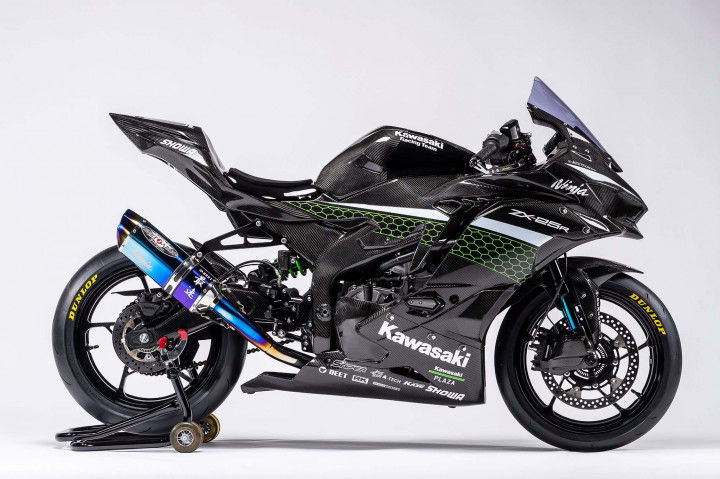 As if the Kawasaki Ninja ZX-25R wasn’t bonkers enough already, Team Green went ahead and dialled things up to 11 with a carbon-fibre clad ZX-25R racebike, appropriately called the ‘Racer Custom.’ It’s got top-spec components up the wazoo, and we’ve managed to get our hands on a bunch of high-res pictures, so let’s dive in and take a closer look.

Parked next to its road-going cousin, the contrast with the Racer Custom is obvious. This mean machine doesn’t bother with things like mirrors, lights and number plates. Instead, it’s sheathed in beautifully lacquered carbon-fibre bodywork - and though it might look like the frame itself is carbon too, it’s actually just a cover.

Yes, it may look fantastic, but the reason behind using carbon-fibre is its lightweight and high-strength properties. Note how the belly pan goes over the clutch cover and wraps around the bottom of the motorcycle, unlike on the stock bike. The joys of not having to accommodate a catalytic converter.

Quite a mean face, innit? We could be seeing a lot more of it soon, because Kawasaki hopes to hold a spec-series with this bike in its home market next year. Viewed head-on, you can see the winglet-like appendages on the lower fairing as well as the crash sliders behind.

You’ll often see racers contorting themselves to tuck in behind the front screen and gain a few extra milliseconds down the straights. To help them out, Kawasaki has provided a taller ‘bubble’ screen on the Racer Custom. Underneath the screen is a ram-air duct that feeds straight into the engine’s airbox.

This exquisite exhaust system has probably caught your eye, and for good reason. No, it isn’t lathered in blue paint, that’s just what happens when titanium (which is what it’s made of) is exposed to the high temperatures of the exhaust gases. The blue colour you’re seeing is thanks to titanium oxides.

Needless to say, the free-flowing exhaust system has probably freed up a few more ponies from the 249cc inline-4 motor, which is already rumoured to produce around 50PS! The cross-links between the headers are to equalise exhaust back pressure across all four cylinders.

The theme of blue continues on the fork stanchions. The upside-down fork itself is the same Showa unit seen on the standard bike, but in this case the inner tubes feature a special nitride coating to help reduce stiction and provide a smoother stroke.

The fully-adjustable shock at the rear is lifted from the big daddy: the Ninja ZX-10R, and mounted horizontally thanks to some clever linkage design. The swingarm once again features a carbon-fibre cover which could possibly increase its stiffness.

Like the road bike, this racer rolls on Dunlop tyres, but in this case, they’re the extra-grippy SportMax Alpha-13 SP model. Unfortunately, the wheels seem to be the one bit on this bike that aren’t made from carbon-fibre. Thanks to the motor’s ultra-high 17,000rpm redline, Kawasaki can afford to run this massive rear sprocket.

It’s status quo on the instrumentation front, but of course, the digi-analogue cluster is shrouded in carbon-fibre, and the levers are now adjustable. The left-hand side switchgear is used to control the ZX-25R’s electronic aids: rider modes, traction control and a quickshifter.

Seen in profile, the rider’s triangle is slightly more aggressive than on the standard bike. The handlebars remain unchanged but extra cornering clearance is on offer thanks to rear-set footpegs.

All in all, this is a gorgeous motorcycle and we hope it’s as good in function as it is in form. While we're still coming to terms with the fact that we'll probably never get the chance to ride it, we can’t wait to see (and hear!) it attack racetracks across Japan next year.