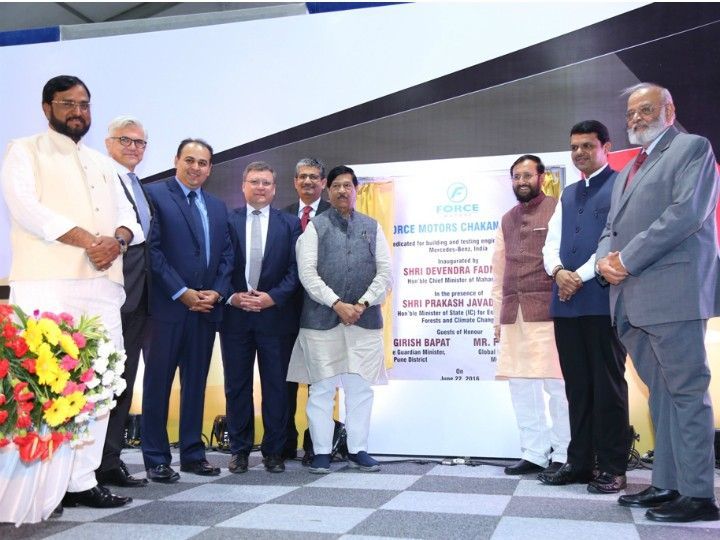 Spread over an area of 130,000 sq. ft the new plant will manufacture engines and axles for Mercedes-Benz cars and SUVs in India. The new plant has a current annual capacity of 20,000 engines and 20,000 front and rear axles. This capacity can be further enhanced, should there be a requirement from Mercedes-Benz, which have its own production facility a stone’s throw away.

Developed at a cost of Rs 100 crore, Force Motors’ new plant boasts eight lines that produce and test up to 14 engine variants. This includes the 4-cylinder and 6-cylinder V-type petrol and diesel engines, powering the complete range of cars and SUVs manufactured by Mercedes-Benz India. The plant employs around 200 people working in two shifts.

“The inauguration of this plant marks a significant step in our 45-year-long association with Mercedes-Benz,” said Prasan Firodia, managing director, Force Motors.

When asked about the impact of the ban on diesel engines of 2000cc capacity or more in Delhi-NCR, Prasan said, “I won’t be able to say how much we are impacted, but as these luxury carmakers are impacted we have also taken a hit.”

Commenting on the ban, Abhay Firodia, chairman, Force Motors said, “We have to remove this artificial ban and we have to ensure that old polluting vehicles are taken off the road.”

Force Motors’ association with Mercedes-Benz goes back a long way. It has been manufacturing engines for the German automaker’s Indian-made vehicles since 1997 and till now has supplied more than 60,000 engines and 50,000 axle units to Mercedes-Benz India. Force Motors also produces engines for Mercedes-Benz’s rival BMW at its Chennai facility, which is close to BMW’s own plant located in the same area