The facelifted redi-GO packs a BS6-compliant engine, fresh looks and more importantly, added features. Does it have enough in its arsenal to take on the S-Presso and Kwid? 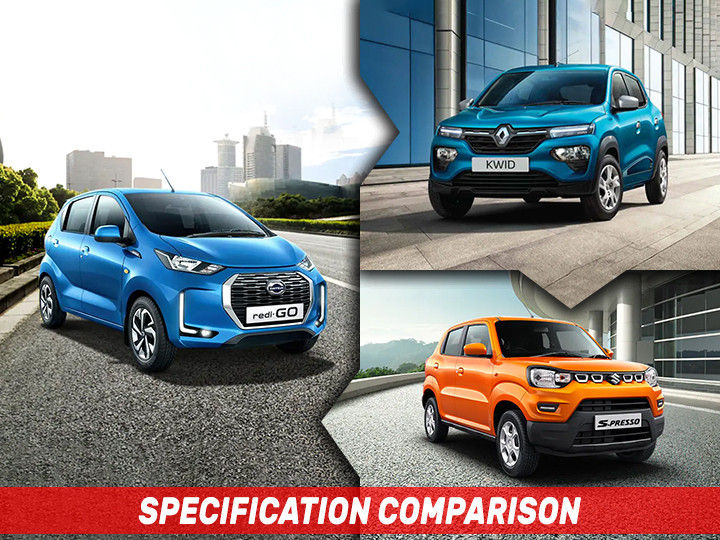 Datsun India has launched the facelifted redi-GO with prices starting from Rs 2.83 lakh (ex-showroom). The budget Japanese carmaker has given the redi-GO a much required cosmetic update, a handful of new features and BS6-compliant engine options. The question is, are these enough to take on the well-established Maruti Suzuki S-Presso and Renault Kwid? Let’s find out.

The facelifted Datsun redi-GO is the smallest model here in every aspect. However, it’s almost as wide as the Renault Kwid and just a tad shorter than the S-Presso. The Renault Kwid is the largest car here while the S-Presso is the tallest.

The Datsun also has the smallest boot in this test when compared to the S-Presso and Renault Kwid.

All three models come with a touchscreen infotainment system with Android Auto and Apple CarPlay, a multi-info driver’s display, front power windows, manual HVAC as well as remote locking. While the Datsun redi-GO is better equipped now, it doesn’t have any feature that sets it apart from the rest.

On the other hand, the S-Presso is the only model in this test to come with steering-mounted audio controls while the option pack in the top-spec Renault Kwid adds rear power windows and rear central armrest to the kit. Overall, the Renault Kwid is the best equipped car in this test.

All cars here come with a driver’s side airbag, ABS with EBD, rear parking sensors, a rear view camera and a high speed alert system. When it comes to the front passenger airbag, both the Maruti and Datsun offer it in the top-spec variant only. However, the S-Presso also offers it as an option from the entry variant onwards for a small premium while Renault offers it in the option pack only in the higher variants. Meanwhile, the Kwid and the redi-GO also feature a rear parking camera.

All three cars come with a BS6-compliant 1.0-litre 3-cylinder petrol engine that develop similar power and torque figures. That said, the power delivery between all three cars differ. To read more about it, head here to see our detailed comparison review of the Maruti S-Presso and Renault Kwid. The redi-GO uses the same powertrain as the Kwid.

In terms of fuel efficiency, the redi-GO, Kwid manual and S-Presso have the same figures while the AMT variants of the Renault and Datsun are a tad more fuel efficient than the Maruti.

The Kwid and redi-GO are also offered with a 0.8-litre petrol engine that develops 54PS and 72Nm, and comes mated to a 5-speed manual transmission only.

The facelifted Datsun redi-GO has a slightly higher starting price than the S-Presso but it does have the cheapest top-spec variant here when compared to the Renault and Maruti. Along with the BS6 update, the manufacturer has also improved its image by giving it a much required facelift, more equipment and a premium cabin. On paper, the specs reveal that the Datsun seems to be in a much better proposition now, which sounds like a win for the Datsun. But would you pick it over the Kwid and S-Presso? Let us know in the comments section below.