2018 Audi A7 Sportback Brings The Prologue Concept To Life 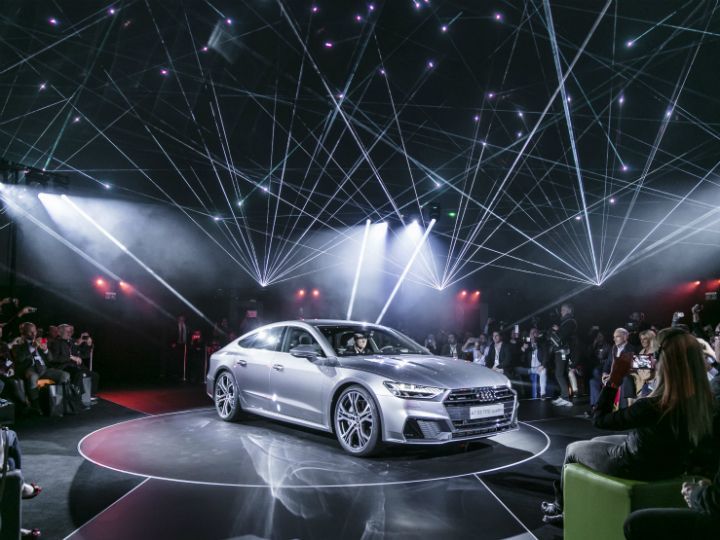 Audi has revealed the all-new Audi A7 Sportback (four-door coupe), finally showing us how the production version of the company's series of Prologue coupe concepts looks like.

The teaser revealed almost a week back showed us that the new car would retain the familiar coupe roofline of its predecessor, but the rest of the car gets quite a comprehensive update.

The face of the new A7 is familiar but is refreshingly different at the same time. Audi's new design, which debuted on the new Audi A8, has been modified to fit the sportier characteristics of the A7. While the larger 'singleframe' grille, new air-intake design and contoured hood look aggressive, the A7's most striking design features at the front are the new headlights.

The new Audi A7 Sportback will be offered with three different headlight designs in most markets - all-LED, Audi's signature 'Matrix' LED and Matrix LED with 'laser spot'. Choose the latter two and the A7 gets a unique looking headlight design - the highlight of which is the 12-slat DRL-cum-dynamic turn indicator setup.

At the side, the new Audi A7 Sportback has better proportions than the model it replaces and looks much sleeker than before. This is thanks to the varied lines and concave surfaces used, especially the lower shoulder line which adds a bit of flair. The large glass area and the extended rear-quarter panel makes the new A7 look longer than before.

The sleek and unique light design continues onto the rear. The taillamp now extends from side to side and mimics the slats on the headlights. The lip on the bootlid is now more pronounced than before, a deployable spoiler sits flush at the top of the bootlid and extends at speeds above 120kmph.

Inside, the sleek and sophisticated design theme continues. Horizontal lines are used to give the cabin a wide, spacious feel. Audi's take on minimalistic design relies heavily on digital displays; three of them are a prominent part of the dashboard - a 12.3-inch screen doubles up as the instrument cluster while a 10.1-inch and an 8.6-inch touchscreen display on the centre console serves up Audi’s MMI and multimedia menus. At night, LED 'contour' ambient lights help highlight the minimal design of the A7's interior.

While the new A7 is not much bigger now; a 14mm decrease in overall length, 3mm increase in width, 2mm increase in height and 13mm increase in wheelbase is nothing to write home about, but Audi claims to have been able to improve interior space thanks to better packaging. The new A7 is based on the Volkswagen group's MLB modular platform which has lead to weight loss and improved structural performance.

For now, Audi has only revealed details about one powertrain - the A7 Sportback 55 TFSI quattro, which is powered by a 3.0-litre, turbocharged V6 petrol motor developing 345PS of maximum power and 500Nm of peak torque. The power is sent through a 7-speed dual-clutch transmission to a quattro AWD system. Audi claims a 0-100kmph time of 5.3-seconds and an electronically limited top speed of 250kmph. Details about other powertrains, including the ones that will power the crazier S7/RS7 versions of the car are expected to be revealed in the near future.

The interesting part about the powertrain on the A7 Sportback 55 TFSI is the use of a mild-hybrid tech, more powerful 44-volt battery system connected to the lithium-ion battery and a new drive belt alternator. Cylinder deactivation during coasting and an engine shut-down procedure when coming to a standstill has, Audi claims, improved mileage and emissions figures.

The A7 will be available with four different suspension systems - all steel springs, a lower sport suspension, electronically-controlled damping and a complete air-suspension system - to cater to different driver/passenger requirements. Rear-wheel steering is also optionally available for improved handling characteristics.

Audi's AI driving systems will also be part of the A7's suite of technologies. For now, customers can choose from a city assist package and tour assist package that adds sensors and driving aids which can help make driving in the city or highways easier and safer. The A7 can also park itself without any inputs from the driver. From 2018 onwards, the car will also be able to navigate and park itself into a closed garage all by itself.

The new A7 will be on sale in European markets from early 2018 with the 55 TFSI priced at 67,800 Euros in Germany (Rs 51.85 lakh). Audi India has specifically said that it has no plans to bring the new A7 Sportback to the Indian market anytime soon, it offers only the more potent RS7 Sportback here as of now.