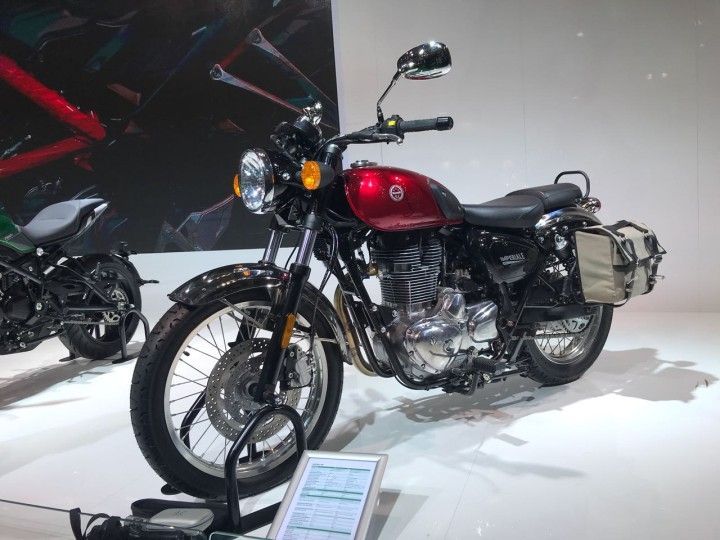 Benelli took the wraps off two stonking new offerings today at the 2017 EICMA motor show in Milan - the Imperiale 400 and the 402S. While the Imperiale 400 is a retro-styled naked, the 402S is a power cruiser on the lines of the Ducati Diavel, albeit in a much smaller package.

Let’s take a look at the Imperiale 400 first. Powered by an air-cooled, single-cylinder, fuel-injected 373.5cc engine, the Imperiale produces 20PS of peak power at 5500rpm and 28Nm of max torque at 3500rpm. Transmission is a 5-speed affair.

Suspension up front is handled by telescopic forks, while the rear gets double shock absorbers, keeping with the traditional look. The front brake is a single 300mm disc with 2-piston floating calipers, while the rear is a 240mm unit with a single-piston caliper. ABS is standard, and the whole shebang rides on 110/90-19 and 130/80-18 tyres mounted on spoked rims. A fabric saddlebag seems to be part of the accessory list.

With its twin-pod instrument console, split seats, Monza-style fuel cap, lustrous dark red paintjob and liberal use of chrome, the Benelli Imperiale 400 is one of the coolest looking retro machines we‘ve seen in recent times, and certainly one of Benelli’s best designed products. It is slated to follow the Leoncino and TRK models to India, and will certainly be a nice alternative for someone looking for a mid-point between the crop of current Royal Enfields and big bikes like Triumph’s Bonneville lineup.

The 402S, on the other hand, is powered by an inline-twin, liquid-cooled 400cc engine that is good for 40PS at 9000rpm and 35Nm at a heady 7000rpm. It gets a 6-speed transmission and comes with upside-down forks up front and a monoshock at the rear. The exhaust pipe ends in two small cans and the whole bike has that squat, all-mass-ahead-and-barely-there-rear stance that is typical of power cruisers.

With a teardrop-shaped headlamp, a floating rear number plate, chunky radiator shroud and exposed trestle frame, the 402S certainly looks menacing, in a scaled-down Ducati Diavel sort of way. Tyres are 120-section at the front and 160-section at the rear, both mounted on 17-inch alloys. Braking is via wavy disc rotors, two at the front and one at the rear, and ABS is standard. The bike has a road-ready weight of 160kg and comes with a 16-litre fuel tank.

No word yet on whether the Benelli 402S will come to India.

Click here for our comprehensive roundup of all the news from the Milan Motor Show.