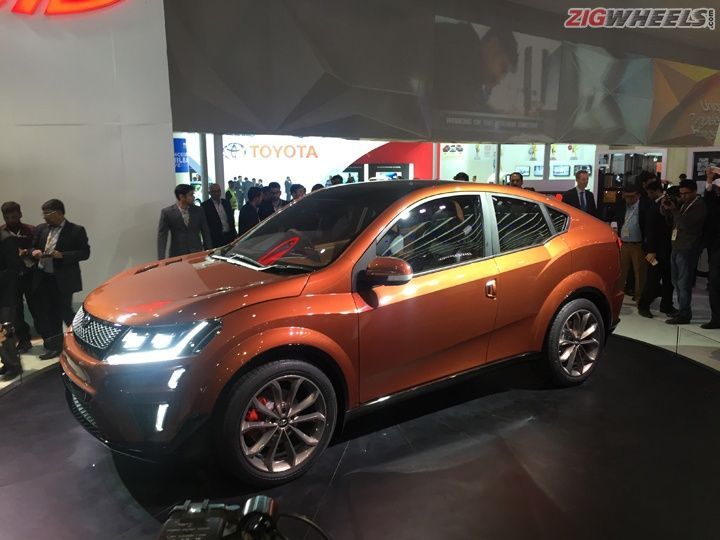 After a thrilling opening day at the 2016 Auto Expo in Delhi, the second day got off to a thrilling start at the Mahindra & Mahindra pavilion. The Indian carmaker displayed the XUV Aero concept on Thursday with a suicide door style design. At the heart of it lies endurance and performance said Mahindra during the launch.

Touted as Mahindra’s most expressive vehicle to date, the XUV Aero concept has been designed fully in-house at Mahindra by 45-year old Ramkripa Ananthan and her 45-strong team at the Mahindra Design Studio in Kandivali, Mumbai. The XUV Aero takes the spirit of a Cheetah and gives it an urban manifestation of the beast; a coupe cross-over with an aerodynamic silhouette, a butch stance and bold graphics.

Echoing the lines of the XUV500, the Aero concept gets a downward sloping roofline and is likely to come with horizontally positioned tail-lamps and a muscular bumper with faux diffusers. The concept will also be a demonstrator for Mahindra’s new infotainment and connectivity features that will feature on future production models. According to Mr. Pravin Shah, president and chief executive, automotive business at Mahindra, the Mahindra XUV Aero concept will “reflect bold design” and “come with all the futuristic connected technology”.

Under the hood, the XUV Aero is powered by a density mHawk 210PS and a next gen turbo boost delivering high power output, it said. It is aided by multiple drive and suspension modes – race, off-road, street and sport. The engine has advanced combustion system with low pressure EGR adaptability for improved NVH and better fuel efficiency. It claims an acceleration of 0-60 kmph in 6 seconds.

Apart from the XUV Aero concept, Mahindra has also showcased other products like the SsangYong Tivoli, e20 sport and the recently launched KUV100.