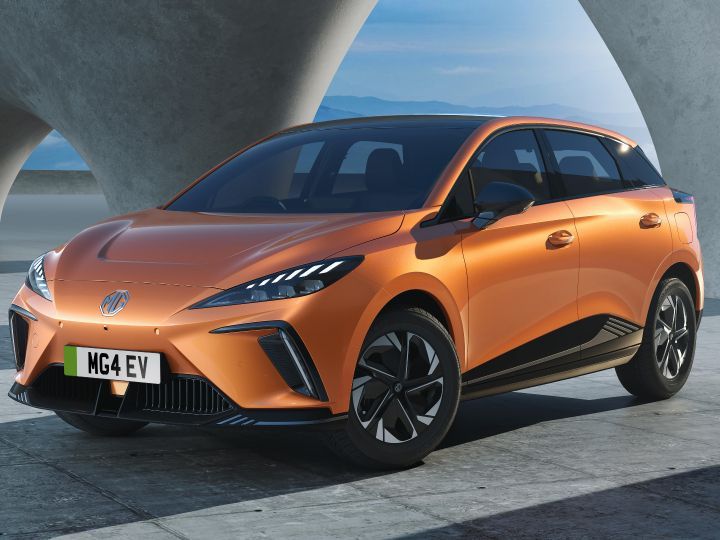 Remember back in February MG Motor teased an all-new EV? Well, the covers are finally off and it will be called the MG4. As the earlier teaser suggested, it’ll be a crossover and will have a lot of firsts, including being the first to be built on the Modular Scalable Platform (MSP), which will also underpin future MG EVs.

Being based on a new platform, it was only natural that the MG4 went through a new design philosophy. It’s most noticeable for the face, as it's a lot cleaner without a massive front grille, and the nose swoops downwards unlike the upright nature of models like the ZS EV. The simplistic nature continues with sleek headlamps with vertical LED DRLs.

That being said, the MG4 still incorporates the aggressive styling seen in current MG models such as a sport front bumper, strong character lines and a swanky set of alloy wheels. It’s got quite a chiselled rear with connected tail lamps, as well as what looks like a double-rear roof spoiler. It measures 4287mm long, 1836mm wide and is 1504mm tall. While a wheelbase figure hasn’t surfaced, the platform allows for wheelbases ranging from 2650mm to 3100mm.

While MG has only revealed one shot of the cabin, it's enough to showcase quite a futuristic yet minimalist layout. What’s really caught our eyes is the centre console area where it's placed high up, there seems to be a touchpad or a wireless phone charging slot, and there’s a rotary knob for the drive modes. Alongside it is what seems to be the electric parking brake button.

We’ve also noticed a nice and slim floating touchscreen infotainment system, with the driver being treated to a small, yet simplistic digital instrument cluster. A detailed feature list isn’t out yet, but the MSP platform will allow for over-the-air updates as well as what MG calls Pixel Point Cloud Comprehensive Environment Mapping (PP CEM), which is needed for autonomous driving tech.

The real party trick, of course, is under the hood. The MG4 will initially be offered with either a 170PS powertrain, paired to a 51kWh battery, or a 204PS option paired with a 64kWh battery pack. Both drive power to the rear wheels, with the most powerful MG4 variant capable of a 0-100kmph sprint in under 8 seconds and a top speed of 160 kmph. That’s not all for the crossover, as MG will be bringing in more powerful all-wheel drive options.

As for range, the MG4 is capable of feats up to a WTLP-claimed 350km (51kWh) and 450km (64kWh) ranges on a single charge. Another cool thing about the MSP platform is that it’ll alloy 50:50 weight distribution.

For all the juicy details, you’ll have to wait until September when the MG4 EV will launch in the UK. So what does all this mean for India? Well nothing at the moment, but the carmaker is planning on introducing a second EV for India. It is slated for an early 2023 arrival as a heavily localised model, and will target the mass market segment with prices likely ranging between Rs 10 lakh and Rs 15 lakh (ex-showroom). This should pit the new EV against the Tata Nexon EV.