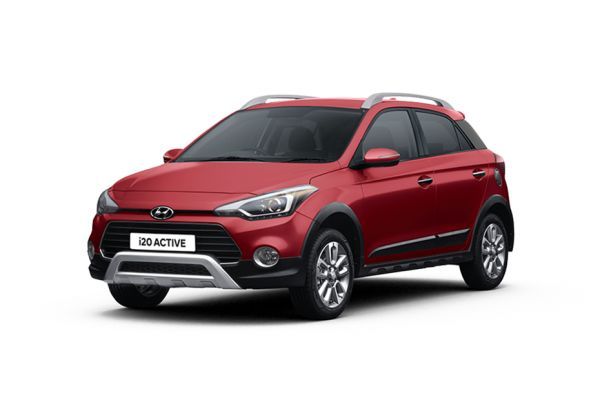 Hyundai has updated the Elite i20 to BS6. Only the 1.2-litre petrol engine has been updated, and all variants are pricier by Rs 7,000. The 1.4-litre diesel will eventually be discontinued since it has not been updated for the upcoming BS6 emissions. Power figures are likely to remain unchanged, as are the 5-speed manual and CVT transmissions. The updated model now costs between Rs 5.60 lakh and Rs 9.21 lakh (ex-showroom Delhi).

Specifications Summary of Hyundai i20 Active

Editor's View of Hyundai i20 Active

All i20 Active News

Top Competitors of i20 Active

All i20 Active Comparisons
rvmp_n_gpopup

Must Read Questions & Answers Before Buying i20 Active

All i20 Active Images

All i20 Active Reviews

The Hyundai i20 Active was probably the first cross-hatch that made its segment popular. Launched back in 2015, it is still one of the best in the segment and strikes a sweet balance between being more bad road-capable and everyday driveability. Hyundai has constantly been updating it from time to time, so it has all the bells and whistles you expect of a modern car. However, the new facelift-based i20 Active should be here around the end of the year and is eagerly awaited.

i20 Active Exterior and Interior

No matter what angle you choose to look at the i20 Active from, it is obvious that underneath lies the Elite i20. To set it apart, though, the Active gets new bumpers, wheels, body cladding and roof rails. It even wears a silver faux skid plate to accentuate the off-road ready look. The 20mm higher ground clearance (190mm) of the Active becomes apparent from the side profile. And even though the rim size is the same, the chain-link alloy wheels make the car look tougher. Overall, the added bits and elements give the Active a muscular look, but not enough to make it look like a proper crossover, say like the Honda WR-V.

Fiat Avventura Urban Cross : With an improved interior, chrome garnishes on the exterior and the removal of the ever unpopular boot-mounted spare wheel, Fiat is calling the Avventure, the Urban Cross. Everything else remains the same.

Honda WR-V: The WR-V is not a Jazz on steroids. It gets more practicality with a higher ground clearance, digipad infotainment system and a sunroof. Doesn’t everyone want a sunroof in their lives?

Toyota Etios Cross : A beefed-up Liva hatchback, the cross is targeted at other faux-crossovers listed above. But it remains a cosmetic job with a higher ground clearance.

The Hyundai i20 Active is a good looking car, but fails to pull a proper cross-hatch image. It is loaded with features and the fact that it is based on the Elite i20 speaks volumes about its comfort and reliability. The only thing that remains to be seen is when Hyundai will give it a facelift, like the Elite i20.

i20 Active Price in India