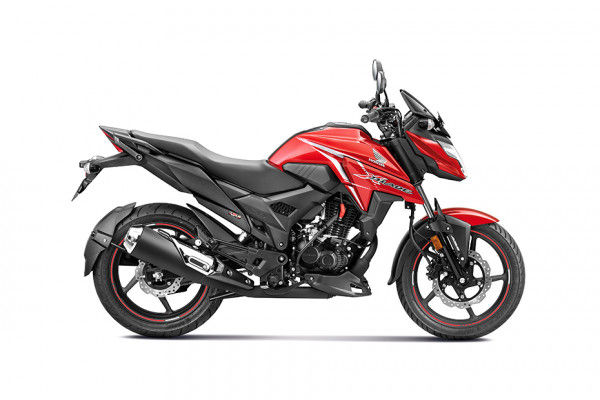 Honda XBlade is a commuter bike available at a price range of Rs. 1.06 Lakh to 1.10 Lakh in India. It is available in 2 variants and 4 colours. The XBlade is a powered by 162cc BS6 engine mated to a 5 is speed gearbox . This engine of XBlade develops a power of 13.8 ps and a torque of 14.7 nm . The Honda XBlade gets disc brakes in the front and rear. The Honda XBlade weighs 144 kg and has a fuel tank capacity of 12 liters.

Honda X-Blade BS6 has been launched with prices starting at Rs 1,06,687 for the rear drum brake variant. The price premium that you are now paying for the X-Blade is slightly over Rs 17,500 and you are not getting a whole lot more for the additional moolah. Head here to know all details.

Honda has employed the same 162.7cc single-cylinder, air-cooled, fuel-injected, counterbalanced engine that you also find on the Unicorn BS6. On the X-Blade, the unit puts out 13.86PS and 14.7Nm, which is 0.94PS and 0.7Nm more than the Unicorn. The BS4 carb engine of the X-Blade produced 0.26PS more but this new engine is torquier, and peak torque rating is 0.8Nm higher. A five-speed gearbox remains constant. There are no changes made to the mechanicals of the X-Blade. You still get the same conventional telescopic fork and preload-adjustable monoshock as before. Same goes for the 17-inch wheels and the bias-ply tyres. Honda has finally given a rear disc brake option on the X-Blade. You can either opt for a 220mm disc or a 130mm drum unit at the rear. A 276mm disc brake is common on both trims and so is single-channel ABS.

Looking sharp and chiseled, the Honda X-Blade was offered as a middle ground in the 160cc segment of Honda motorcycles, slotting in between the Unicorn 160 and the Hornet. The same can be said about the BS6 X-Blade as Honda has made no alterations to the design. The aggressive sculpted tank gets small but prominent tank extensions and the robotic face gives it a mean look

The Honda X-Blade gets a digital instrument cluster and LED lighting for both the headlamp and the tail lamp. The single-piece seat on the X-Blade is one of the longest in its class.

What is the price of Honda XBlade?

The ex-showroom price of Honda XBlade is 1.10 Lakh. Check On Road Price of XBlade. .

What is the Tyre and Wheel type of Honda XBlade?

Does the Honda XBlade have ABS?

Which is better Honda XBlade or TVS Apache 160 4V?

What is the EMI of Honda XBlade in Delhi?

What are the colours available in Honda XBlade?