Electric, Not Eccentric: The 2017 e-Golf

It’s electric, understated and it’s not coming to India. But we just couldn't give up the chance to drive the next-gen version of the iconic Volkswagen Golf. It formed the perfect backdrop to learning about how Volkswagen is gearing up for the future 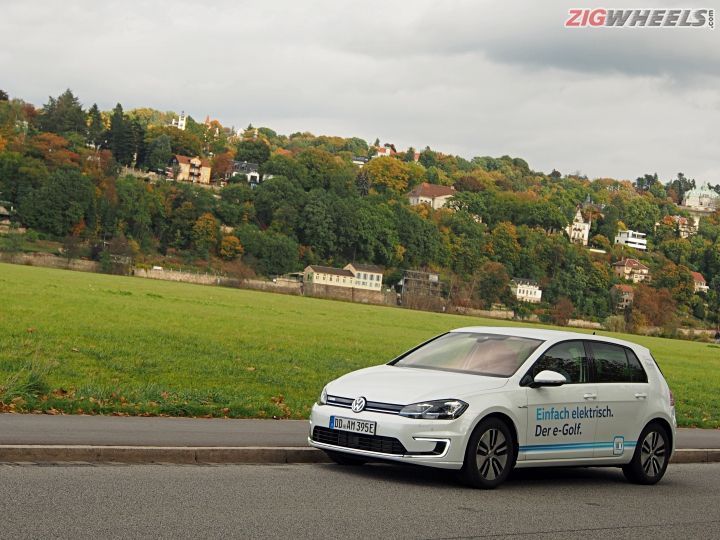 Getting behind the wheel of an icon is always special, and in Volkswagen’s stables the Golf is only second to the more nostalgic Beetle. Since the Mark I in 1974, seven generations have followed, making the Golf the second bestselling nameplate (behind the Toyota Corolla) in the history of the automobile. And while most of those sales have primarily been internal combustion (IC)-engined cars, what we drove was the e-Golf, which is 100 per cent electric.

For our first stint behind the wheel we drove from Hannover airport to the City of Wolfsburg in the Lower Saxony state in the north of Germany. The Wolfsburg plant is the largest manufacturing facility in the world in terms of area and is also the group headquarters for Volkswagen. A few kilometres of city driving followed by a nice 80km blast down the famous autobahns promised to be a nice test for the new and updated 2017 e-Golf.

But what is it?

The e-Golf is the second all-electric car from Volkswagen (the other being the e-UP) and has been on sale since 2014. In 2017 it received a new, higher capacity battery unit that bumped up the range from 190km to just under 300km, and it’s this updated powertrain that we’ll be driving. Its electric motor develops 136PS of power, 291Nm of torque, and features a single-speed transmission, all powered by the 35.8 kWh lithium-ion battery. From a regular 13-15 amp socket at home, charging can take anywhere between 12-15 hours. With a dedicated charging socket, available as an accessory that you can install at your home, that time can be reduced to 4-6 hours and from a DC fast-charging station the batteries can be fully charged in just under an hour. Unlike other electric/hybrid/green cars that tend to look a little quirky, Volkswagen has intentionally giving the e-Golf an understated look. There are simple blue elements around the grill and LED headlamps on the outside and the interior is stock visually. This helps give the e-Golf a very ‘business as usual’ feeling and just lets you get on with the driving.

When you get moving you first notice how beautifully linear and immediate the acceleration is. Whether you're accelerating from 10kmph to 60kmph or from 120kmph to 150kmph (approximately the top speed we managed on the autobahn), the car accelerates with the same urgency. Unlike a regular engine, you don't have to wait for the revs to rise and the power to build. Instead, it’s just maximum torque available at any rpm. Add to this the fact that there is just one gear and stepless acceleration, and the end result is a smooth driving experience that no modern gearbox can match.

The gear lever is near identical to the regular automatic Golf, with ‘park’, ‘reverse’ and ‘neutral’, but the ‘drive’ mode is a little more complex. In D-position the lever rocks both left and right to toggle between D, D1, D2 and D3; where D gives you no regenerative braking and lets the car coast when you lift off the pedal and D1-D3 give you increasing levels of regenerative braking when you lift off the accelerator, allowing the batteries to recharge as you slow down. There is also an additional B mode which gives the most regenerative braking and even allows you to drive the car using just the accelerator pedal - press to accelerate and lift off to brake, something that is useful in city driving.

In a short drive around the city of Dresden, the e-Golf actually gained a couple of kilometres on its range calculator in B-mode. This is mostly because speeds were never over 50kmph and there was a long downhill stretch where the regenerative system was able to add more juice back into the batteries than we consumed. This wasn’t the case on the highway and on the 90km-long drive from Hannover airport to Wolfsburg, our initial 275km battery range depleted to just 130km. This meant we actually wasted 55km of range with a few spirited bursts of full throttle on some of the unrestricted stretches of autobahn. We also used mostly D-mode on the highway as it was the least obtrusive and allowed the car to coast along the highway if you lifted off. In the other regenerative D-modes stepping off the accelerator at highway speeds gave a surprising amount of deceleration. With practice managing this should become easier and you’d be able to save more kilometres on the range calculator.

Electric cars are expensive and the e-Golf costs just under Rs 27.4 lakh in Germany. You then have to add duties, taxes and cess to arrive at the even higher cost to import it! With the government's wavering stance on import duties and sops for electric cars, Volkswagen says the e-Golf isn't heading to the subcontinent any time soon. That said, with the extended range of 300km, the e-Golf shouldn't pose too much range anxiety to Indian customers and with some proper planning you should never run out of charge using the e-Golf as a pure city runabout. Now if Nitin Gadkari’s push for 100 per cent electric cars in 2030 gathers more steam, Volkswagen know that they have two packages, in the form of the e-UP and the e-Golf, just ready to be rolled in.

Volkswagen makes the e-Golf in their factory in Wolfsburg and in the Glasshouse in Dresden. Both facilities showcase their new emphasis on clean energy and technology post the 2015 diesel emissions issue. In fact, in Wolfsburg, customers are encouraged to come pick up their cars from the plant where deliveries happen in the Autostadt. This famous destination centre is where the VW Group showcases technology and future ideology as well as celebrating their other different brands like Audi, Porsche and Skoda. In the southern city of Dresden, the magnificent Glasshouse assembly line, which built the now discontinued Phaeton, has now been refitted for the e-Golf. And the entire process is now open to public viewing and receives over 400 visitors/customers daily.

Volkswagen is also preparing for the impending digital/electronic age and envisions that by 2030 as much as 50 per cent of the cars they make will be electric. In light of this, they have taken on the manufacturing of the battery packs for their passenger cars in their Braunschweig plant where cells purchased from third party providers like Panasonic, Samsung or LG are assembled  into the battery packs for the Passat GTE, the e-UP and the e-Golf. They have also started their own R&D into battery technology and don’t rule out venturing into manufacturing as well if the need arises. They have only recently committed to spending €50 billion on battery cells and that figure arises from the number of battery cells they will need to power their electric model range by 2030.

To imagine and create those new models and the technologies that will drive them, Volkswagen has even set up three ‘future’ centres in Beijing, Berlin, and Silicon Valley, California, where experts from all aspects of design, manufacturing and even potential customers are being involved right from an early stage. Heading this push for the future is Johann Jungwirth who has been named ‘Head of Digitisation Strategy’, a new position in the group. Jungwirth says, “We need to shift from being a hardware company to a vertically integrated hardware, software and services company.” They have also floated companies like Moia for ride pooling and invested in  Gett (similar to Uber) for ride hailing which will also help them provide mobility solutions for the future.This overall improvement has also focused on changing the way the company works. It’s called Business 4.0 and this aims to focus on adding digitisation to everyday worklife to make the lives of their employees easier.

India is an important factor in their plans too and in one study that Volkswagen conducted along with the World Economic Forum, they found that India actually features in the top three countries when it came to the acceptance of self driving vehicles. The study showed that 85 per cent people surveyed in India were in favour of autonomous vehicles. But this future requires a lot of coordination with local regulations, infrastructure and even depends on the city layout and infrastructure as well. America will most likely be the first country to embrace autonomous cars as they already have a bill for self driving vehicles that is being discussed in the US Senate and could be approved as soon as mid 2018. Jungwirth invisions China to be the next country that will be ready, followed by cities like Singapore where automated technology could be more easily integrated. So while it’s certain that electric is the future, when we will see electric and self driving cars on our roads is still uncertain.