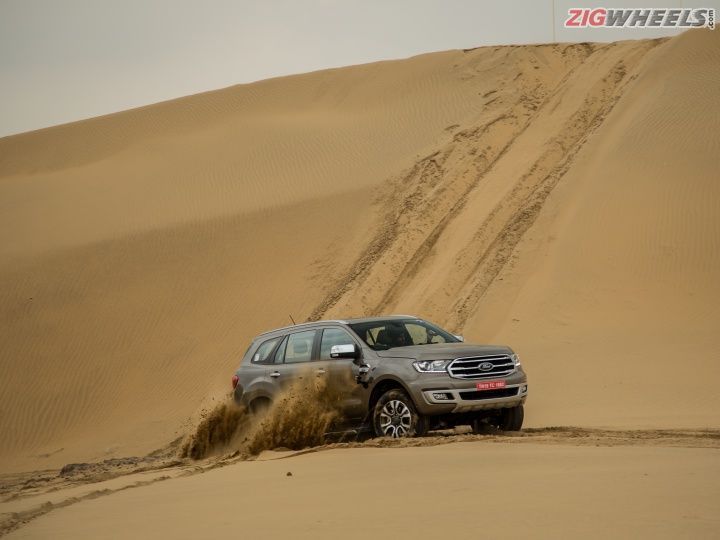 When Ford unveiled the global facelift to the big Endeavour, most of us at the ZigWheels office said: ‘What update?’ And if you’ve got the same feeling lingering in your head, we don’t blame you. You need to get up close with the SUV to really make out the difference.

When you take a closer look at the SUV, two changes are immediately noticeable. First, the new design for the 18-inch alloy wheels and second, the smoked finish on the headlamps. That the grille is slightly larger with sharper detailing, the silver faux skid plate takes up more real estate on the bumper and that the daytime running lamp setup is now slightly larger can be entirely missed. From the rear, you wouldn’t be sure if you’re following the updated Endeavour or the outgoing version. Save for the addition of LED elements in the tail lamp, all else remains exactly the same.

We love that the Endeavour looks so unabashedly old school in its appearance. It truly can play bully on the road. Also, it blends into the setting whether you’re taking your significant other on a date at a swanky five-star during the week or dunking it into the mud with your pals on the weekend.

If you want to test a hardcore Ford geek, you can ask them to tell you what’s different inside the ‘updated’ Endeavour’s cabin. Changes are subtle enough to go completely unnoticed. Everything from the seats (we'll get to this in a bit) to the dashboard design and even the buttons and switches used are identical to the pre-facelift version. But the chocolate brown leather on the dash has been replaced by black leather. A subtler update is the design of the gear lever. It’s meatier to hold now and the metallic insert makes it feel richer than before.

In terms of features, you’ll spot small additions. It all begins right when you get the keys to SUV. You’ll see a new key fob, identical to the one we’ve seen on the updated EcoSport and the Aspire. This definitely feels a lot more premium than the older key shared with the Figo. Then there’s some added convenience in the form of passive keyless entry and push-button start.

Also, the Endeavour lineup will be trimmed to offer just two variants: Titanium and Titanium+. And it’s not like the Titanium variant is bare bones. It gets a host of goodies including six airbags, active noise cancellation, a tyre pressure monitoring system and a 10-speaker audio system. It also features the new remote tailgate release which lets you open and close the boot by waving your foot underneath the rear bumper. Compared to the Titanium+, the only real miss in the lower variant is of the panoramic sunroof. The top-spec variant adds a driver’s knee airbag, powered co-driver’s seat (a new feature), power folding third row seats, ambient lighting and semi-auto parallel park assist.

Yes, one could argue a case for telescopic adjust on the steering, memory seats or seat ventilation even. And, yes, the small bugbears with seating continue to plague the Endeavour. If you’re 6’ tall or above, you’ll complain about the lack of underthigh support in the second row or being a bit close to the roof. Similarly, third row room is strictly average (best suited to kids), and Toyota’s Fortuner clearly does a better job of being a seven-seater. So, even by facelift standards, the update is quite minor. But when you take a look at what was already on offer, there’s hardly anything you could wish for.

We’ll address the burning question right at the start. No, the new 2.0-litre bi-turbo engine isn’t on offer, neither is the new 10-speed automatic. You get the same set of engines: a 2.2-litre, four-cylinder motor, and a 3.2-litre, five-cylinder mill. The headline numbers remain identical too, with the smaller engine churning out 160PS of power and 385Nm and the bigger motor making a healthy 200PS and 470Nm. Notably, the 6-speed manual transmission is making a comeback with the 2.2-litre engine.

Unlike the Fortuner, you can’t have the Endeavour in a 4x4 manual configuration. Four-wheel drive is on offer only with the larger engine that’s paired with a 6-speed automatic. You also get Ford’s Terrain Response system that gives the Endeavour some serious off-road chops. We got a taster at the sand dunes of Sam in Jaisalmer and it’s enough to say we were reassured of the capabilities of the brute. The relative ease with which the Endeavour sailed through some properly tricky terrain was refreshing to experience. Sure, quite a few of us (including our instructors!) managed to beach our test cars and get stuck in the middle of a desert. But that’s got more to do with sand being utterly unforgiving than the Endeavour being incapable.

Out on the road too, the Endeavour feels oh-so-familiar. The burly 3.2-litre engine is more than capable of driving cross country without batting an eyelid. You’d still wish for slightly quicker shifts from the autobox, but other than that driving experience remains predictable. Of course, it continues to iron out broken roads like not much else and is at absolute ease being thrashed around too.

Since it’s based on an old-school ladder frame chassis, you continue to feel a bit of bounce from the suspension when you hit sharp bumps. This is particularly prominent in the second row when there are two or three occupants in the car. But weigh the Endeavour down with a full house and this becomes noticeably better too.

Driving the Endeavour, then, feels no different. Despite its size, it feels manageable inside city traffic. As always, it comes across as something that was made for mega road trips with the gang.

With the update, pricing has surprisingly gone down albeit marginally.

It continues to be phenomenal value for money, and low maintenance costs makes the big Ford a hard to resist package. The Endeavour, then, is the friendly lovable giant it always was. It nails the basics of presence, tech capability and ride quality down to the T. And that's all it needs to do. Yes, the added features make a stronger case, and that there's a well-equipped lower variant sweetens the deal further. We’re glad it hasn't changed, because it never felt like it needed to.