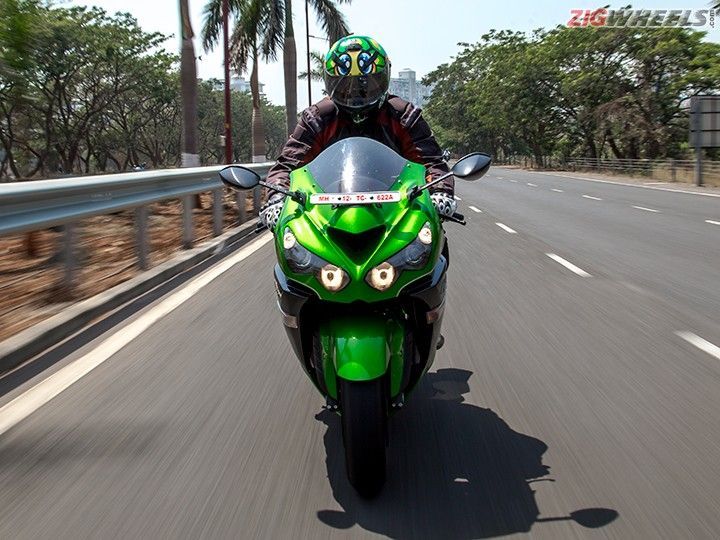 Speed is the name of the game in today’s day and age. We want everything to be faster and quicker than its predecessor. A field that has a special relationship with speed is the automotive sector. Ever since the second motorcycle was built, the fight for speed had commenced. Top speed is among the most vital data for any two-wheeler manufacturer to showcase their superiority over their rivals. And it is this scuffle for speed that gave birth to a motorcycle like the Kawasaki Ninja ZX-14R. Although the two-wheeler giants have signed a “gentleman’s agreement” to limit their motorcycle to 300kmph, this hasn’t stopped them from manufacturing missiles on two-wheels. If the thrill of speed is what you are looking out for then the Kawasaki Ninja ZX-14R should a top contender in that list. Despite the fact that the Ninja ZX-14R received a generation leap few years back, the boffins at Akashi felt the need to give their giant a facelift. So has the updates made any difference? We spend a few days with the 2016 Kawasaki Ninja ZX-14R to get you the answer.

The Kawasaki Ninja ZX-14R is an intimidating motorcycle and it makes no excuses for that. One has to see the bike in the flesh to understand its rather large yet somehow well proportioned dimensions. While visually the motorcycle looks similar to the pre-facelift model, Kawasaki has played with the colour to subtly distinguish itself, like the dual-tone finish on the four ribs along the fairing. Other updates include a coarser finish on the exhaust muffler, Brembo brakes, Öhlins rear suspension and smoked oil reservoirs. The most striking feature of the bike is the front section with its quartet of projector beam headlamps split by an air-intake on top.  The effect of its menacing face was clearly visible on the highways as four-wheelers switched lanes the moment they saw the big Ninja in their rear-view mirrors.

The bike employs retro looking twin pod analogue console for speedometer and tachometer while a LCD display gets sandwiched between them. As part of the update, the digital screen background can be changed from black to white. While the clocks look good visually, they feel outdated in comparison to modern TFT digital instrument consoles and it would have been great if Kawasaki had given an all-digital dash on the updated model.

While the Kawasaki Ninja ZX-14R isn’t one of the most beautiful motorcycles out there in the market, it definitely has the appeal of a rock star and curious bystanders couldn’t stop clicking the motorcycle from every angle fathomable. Fit and finish of the motorcycle is of the highest order and it does complete justice to its “Made in Japan” tag. Switch gear quality is also fantastic while in terms of ergonomics I felt that the horn button should have been a few centimetres lower so as to be closer to the thumb of the rider as it is a very important component on Indian roads.

In the pursuit of speed, you need power and that the 2016 Kawasaki Ninja ZX-14R has in abundance. The 1,441cc, inline-four motor pumps out 200PS of power which can be hiked to 210PS with optional ram air and peak torque is 158Nm. With the stricter Euro IV norms being implemented, Kawasaki engineers have employed a revised ECU to abide by them without affecting the power output. I started my ride in low power mode which cuts power by 25 per cent while throttle response is gentler. The Ninja ZX-14R felt very docile at low speeds and surprisingly easy to ride despite its humungous size which seemed to have evaporated on the go.

Once on the highway, it was time to witness the Ninja magic and I opened the throttle rather generously. From a gentle giant, the bike turned into a monster once past 5,000rpm as it picked momentum in a lunatic manner and the surroundings turned into a blur. Such is the performance that it redefines the word effortless and no wonder the stock bike can dismiss a quarter-mile in under 10 seconds! After spending some time on the saddle I switched to full power mode, and the difference was felt in the top-end of the rev range with more punch from the powerplant.

There’s also a three level traction control system to safeguard the rider from sticky situations and lay the power down in a respectable manner. Another aspect of the Kawasaki engine is its tractability; the engine can hold speeds around 50kmph without any knocking in 6th gear and just a twist of wrist is enough to get acceleration that will put many middleweight superbikes to shame. Also the engine is extremely refined and one can cruise at speeds between 150-200kmph effortlessly; while we don’t suggest you to do the same on our roads it does gives you an idea about the performance of the big Ninja.

The 6-speed gearbox does felt a bit clunky between 1st to 2nd post which it offers crisp and precise shifts while the clutch feels lighter than its predecessor. The 2016 Kawasaki Ninja ZX-14R also gets the benefit of slipper clutch which will be a boon on the racetrack while I feel a quickshifter should have been added given the performance on tap. Big displacement motorcycles struggle to keep their cool in our hot and humid conditions but the Ninja ZX-14R is an exception. Although engine temperature went into triple digits, the cooling system does a fantastic job in venting the heat away from the rider and the heat dissipation of the bike is among the best for performance bikes we have tested. The bike returned us an overall fuel efficiency figure of 12kmpl which is good enough for 250km on a tank full.

The riding posture on the Kawasaki Ninja ZX-14R is a great mix of comfort and sportiness. This can be credited to the fact that the clip-on handlebars are now 13.2mm higher and 13.3mm closer to the rider. The updated bike also gets new 'gunfighter seat' which offer great cushioning and one doesn’t feel cramped for space like on other performance machines. Also the generous saddle is touring-friendly as we found out on our close to 150km ride from Pune to Mumbai. The Ninja ZX-14R is also pillion-friendly, a trait that not many high displacement bikes can boast about. Another surprise that was in store for us was the handling dynamics of the Ninja ZX-14R.

Despite its large dimensions, the bike attacks corners enthusiastically and although it isn’t sharp handling as its litre class sibling but on the sweeping bends it’s great fun. And the same trait continues in city traffic as well.  I was able to carve my way through Pune traffic rather effortlessly which can be credited to the brilliant weight distribution. The updated model features compression and rebound adjustable Öhlins TTX 39 rear suspension system. The ride quality of the Kawasaki Ninja ZX-14R is supple as it absorbed the dips, cracks and bumps seamlessly.

The new bike also gets equipped with the latest Brembo braking hardware, similar to the Ninja H2 and H2R as well as the new 2016 Ninja ZX-10R motorcycle. But the brakes lacked the ferocious bite that one expects from such a capable machine and it can be a bit unnerving given the speeds the bike is capable of. ABS does its job well in keeping the behemoth under control while hard braking.

At Rs 17.9 lakh ex-showroom Delhi, the 2016 Kawasaki Ninja ZX-14R is a motorcycle that only a privileged few can afford to own in India. Performance is the highlight of the motorcycle and the sheer ease with which the bike attains momentum is something that every two-wheeler enthusiast should strive to experience in his lifetime. Despite the mind boggling performance, the Ninja ZX-14R is also a very easy bike to ride and live with, if you show it respect. Yes pulling the bike out of a parking and the fact that it makes no excuses about its heft at low speeds is something the buyer will have to adapt to.

Also given our road conditions and traffic sense, it’s really difficult to fully explore the potential of this marvellous piece of motorcycle engineering. Having said that, if you have the moolah and are ready to live with the above hindrances, and in search for a for a fast and comfortable sports tourer with a dose of madness, then the Kawasaki Ninja ZX-14R is a good option. The biggest obstacle for the new Ninja ZX-14 is the fact that its arch rival, the Suzuki Hayabusa will be assembled in India dropping its price down to Rs 13.57 lakh. Whether the Ninja ZX-14R justifies the Rs 4.5 lakh premium is an answer that we shall find out on some other day.