The Porsche Experience: Learning, Unlearning and Meeting A Hero

Driving Porsches on a racetrack? Who says no to that? 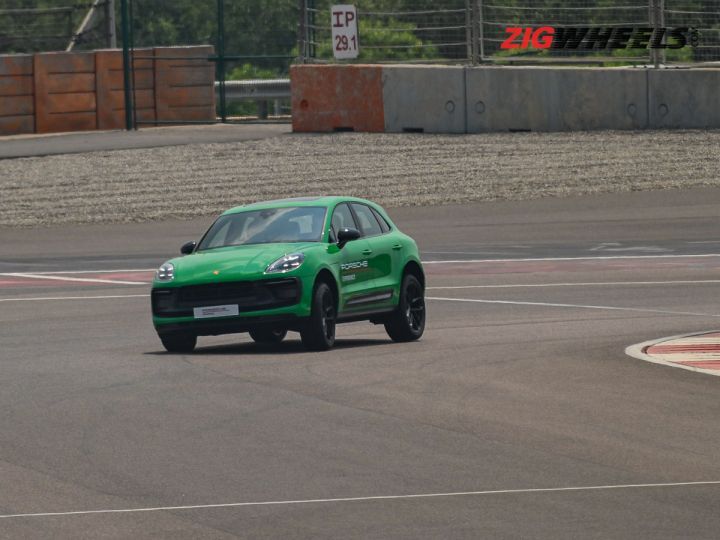 “Oh my lord… I haven’t seen that much understeer since my two-year-old…`` My instructor Paul’s voice trailed off as I tried wrestling the Macan GTS into the final corner at the Buddh International Circuit. Big mistake. Big, big mistake.

Much to my relief, this was just an exercise to help us get used to our braking and turn-in markers for track laps later. I’d managed to get the right line, braked on time and turned at the right time too. My mistake? I didn’t brake enough and carried more speed through the corner than I should have. Expletives were uttered. Mothers were summoned.

As the Macan GTS lit up a Christmas tree on the dashboard to ensure I didn't end up in the pit wall, I made cardinal mistake number two: I attempted to battle understeer by turning in harder. All this, while I knew — in theory — this just leads to more understeer. Adequately embarrassed, I reminded myself this session involves unlearning as much as learning.

“Your hands were almost crossed out, mate. You try that in the GT3 RS and it’ll bite you back. Careful.” Paul rightfully admonished my overzealous attempt at eking out a little more speed through that corner. I do not want to screw this up. The GT3 RS has a permanent spot in my list of all time greats, and I simply cannot afford to mess it up. Sometimes I need expert advice. So I talk to myself.

Earlier in the day, I’d got a teeny weeny taster of what the RS is capable of. This was immediately after the first exercise, where I was sat in a 911 S Cabrio, navigating a tight slalom course. I managed to set the fastest time in my batch — mostly because I was careful to not pick up ‘penalty’ points for knocking down cones or overshooting the finish line.

Driving the GT3 RS after the Cabrio through the same course reemphasized what I’m dealing with: precision, poise, seriousness. That’s the diametric opposite of what describes me — mostly clumsy, erratic and a little looney. Opposites attract?

Can’t wait to have some proper-proper track time with this, I mumbled to myself as I walked over to a Panamera Turbo S waiting to rewire my internals. The course with the super-four-door involved accelerating like a bat out of hell and braking as hard as we possibly could while swerving. This meant all the blood exited my brain for the first few seconds and then came gushing back like a tsunami.

All this while the Panamera demonstrated amply the prowess of Porsche’s brakes as well as their calibration of all the electric nannies meant to keep me in one piece. It takes 630 horsepower and ceramic brakes to make a grown man blush, apparently.

I’m overlooking the start-finish straight from above the pits and I finally get to soak in what’s in store for the day. A couple of Taycans, the naughty SUVs — a Cayenne Turbo and the Macan GTS, the crackpot Panamera Turbo S, the two 911s we got to sample earlier and a 718 Spyder — wait for it — MANUAL! Hallelujah.

Once we make our way down and got into our helmets, we’re ushered towards the Taycan. I used this time to remind myself of the track layout and memorise my markers. It helped that the Taycan was as quiet as a church mouse, even while wafting me past 200kmph on the back straight. I cannot get myself to ‘review’ a Taycan over two laps at the BIC. But there were two feelings I exited the electric sportscar with. First, get used to going fast. The future involves instant acceleration, not a linear build up. Two, get used to stopping weird. It’s not the going, but the stopping that involves a learning curve.

While my instructor and I agreed on how the Taycan is still very much as Porsche as Porsches get, the GT3 RS, 911 Cabrio and the 718 flew past the main straight screaming their guts out. “Why does this have to be a thing of the past?” I asked a colleague. Then I answered myself, “Might as well enjoy it while it lasts.” When I need profound replies, I talk to myself.

Some jitters, some twitches and a little lip-smacking later, it was time to experience the sportscars. The 911 Cabrio first reminded me about why it truly is an everyday sportscar. There’s enough power to keep you entertained and Porsche’s handling wizardry ensures you aren’t buying a straight-line tool. Not to say it isn’t capable of dizzying speeds. If I had one, I’d be road-tripping with the top down whenever I could.

I sized up the 718 next. Compared to the 911 that felt like a relaxed living room, the 718 Spyder felt like a tight walk-in wardrobe. A six-footer like me had to rely on forgotten yoga lessons to make sure I get in. But once I got into my driving position, it almost felt like the 718 Spyder was an extension of my limbs. I know the phrase is overused, but the tight and agile chassis, the darty nose and the brakes meant I could really push it practically instantly.

The 718 Spyder also becomes the most powerful manual car I’ve driven till date. Many hacks claim this is the best manual gearbox in the world. While I want more seat time to confirm that (please, Porsche India?), I can confirm that it was the most involving experience I’ve had. Between the weighted clutch, the precise shifter and tech that auto-blips on downshifts, you can thrash the 718 Spyder for all it’s got. Banging out precise upshifts at the redline is an immensely satisfying experience. The paddles might be infinitely quicker at this, but it shall NEVER come close to a clutch-in, gear-change, clutch-out.

Right, GT3 RS next. I calmed myself down as I pushed the driver’s seat practically all the way back. There’s no powered seats here, no air-conditioning even. The inside door handle is replaced by cloth. It’s the equivalent of a renowned scientist who’s found the meaning of life. Established, hugely revered yet relaxed and detached.

You spend time in here and you realise why focus always precedes excellence. The RS isn’t the most complete Porsche. It might not be the most desirable to many too. But what it does, it does with so much finesse — it’s hard to not fall in love.

I must’ve read multiple reviews — but nothing prepared me for the rush as the flat-six screamed towards the redline. The gearbox picks up miniscule differences in throttle, downshifting in the blink of an eye whenever it could. So, I learnt to be careful of what I wanted from it. The GT3 RS is hurling me towards the braking marker on the back straight at well over 230kmph, and I stomp on the B-pedal like my life depends on it. Understeering in the Macan GTS earlier comes gushing instantly. The RS won’t understeer, but if I get it wrong, it will snap back at me.

“No, no, no, please don’t. Please don’t.” I’m seemingly talking to the GT3 as if it’s a friend I’ve known for decades. “I got your back,” I heard as it sheds speed almost nonchalantly and I turn in right on my marker taking a tighter line behind the pace car. You see, in the Macan GTS earlier that day, I overestimated my abilities. With the 911 GT3 RS I was guilty of underestimating what it was capable of.

For all the talk of it being violent and angry (which I’m positive it will be if I switched all the electronics off) — it’s genuinely surprising how the GT3 RS has your back through quite a lot. It rewards clear thought and precise inputs. Mess up either and you’re doing it injustice. The second lap in the RS was relished knowing that “Never meet your heroes” is a bunch of bull. Meet them, they’re likely a whole lot better than you’d ever imagined them to be.

We capped the track experience by driving the SUVs and the Panamera Turbo S around the track. The Cayenne Turbo and the Macan GTS are surprisingly at home devouring corners. The Panamera Turbo S’ brutal straight line acceleration felt effortless, and almost something that was happening in the background, while I used this time to reflect on the day that’d gone by.

I’d driven the entirety of the Porsche range in a matter of hours. I had met my hero. I’d learnt a lot of new skills, and more importantly unlearnt quite a few too. I now have a certificate that says I’ve completed a ‘track day programme’ and a cool plaque of the Buddh International Circuit sitting on my desk.

Sometimes, I need to be reminded about why I love cars so much. I’m glad I talk to myself.