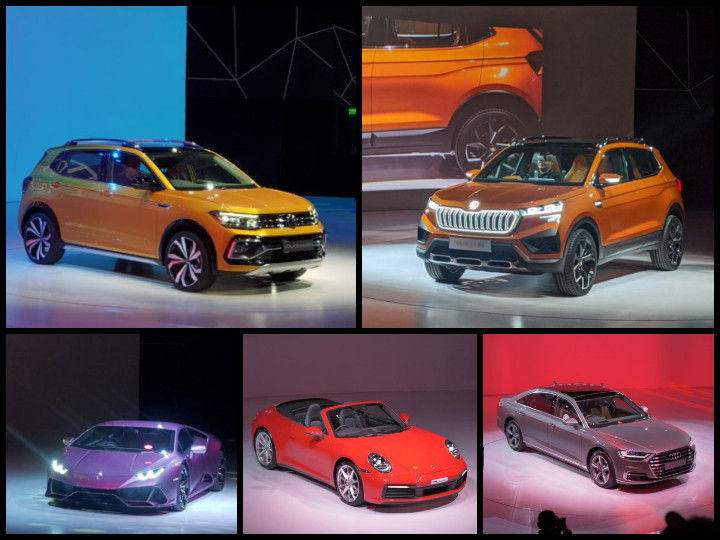 Tonight Skoda Auto Volkswagen India decided to turn their Media Night in New Delhi into a mini Auto Expo of its own. The event was a celebration of the group's efforts towards the India 2.0 Project. Skoda Auto India gave us a global debut with the reveal of the Vision IN Compact SUV Concept, Volkswagen India debuted their compact in the form of the Taigun. And as if that wasn't enough, Audi launched their flagship sedan, the A8 L in the country. But wait there's more! Porsche brought the new 911 Cabriolet and the manic Lamborghini Huracan EVO AWD also marked its presence. And there will be even more in store when we meet them again at Auto Expo 2020 later this week.  Further, Volkswagen also revealed its sleek new logo at the event. Read on for all the dope.

Skoda Auto India globally revealed the Vision IN concept at the Group Night. The Vision IN is an SUV specifically developed for the Indian market by Skoda Auto Volkswagen India. It’ll be based on the heavily localised MQB A0-IN platform. The Vision IN is expected to be launched by 2021 and will come as a petrol-only model.

In terms of design, the Vision IN’s styling features a hint of Kodiaq thanks to the trademark butterfly grille and the layout of the headlamps and small fog lamps. The bumpers, with its sporty airdams and rugged skid plates, give the Vision IN a butch look. Moving on to the side, a shoulder line runs through the profile while the flared wheel arches, body cladding and the large wheels give it an imposing stance. At the rear, the Vision IN’ tail lamps takes cues from the EU-spec Kamiq. Other highlights include the illuminated Skoda logo and an LED light strip that runs across the width of the tailgate.

Inside, the Vision IN's dashboard is similar to other Skoda cars sold abroad. There’s a floating infotainment screen on offer and it could take up climate control duties as well. The cabin gets orange highlights, adding a dash of colour to the mix. Other highlights include a digital instrument console and a sleek three-spoke steering wheel. Further, the sleek gear toggle suggests that the Vision IN could get shift-by-wire technology for selecting drive modes in the AT variant.

The Skoda Vision IN is expected to go on sale in the first half of 2021. We expect prices to start from Rs 10 lakh (Ex-showroom). The Vision IN will lock horns with the Hyundai Creta, which is set to get a generation update at Auto Expo 2020, the Kia Seltos as well as the upcoming Volkswagen India 2.0 SUV.

Volkswagen has revealed the Taigun, its India 2.0 SUV at the Group Night. Based on the Vision IN’s platform, the Taigun borrows plenty of styling cues from the China-spec T-Cross, VW’s compact SUV sold in international markets. The design of the Taigun is typical VW with clean lines and sharp creases. Highlights include a slatted grille, large foglamps, flared wheel arches and connected tail lamps. Volkswagen has also added a dash of body cladding to make it look rugged and butch.

Inside, the Taigun’s dashboard comes with a minimalist design and looks similar to the T-Cross. The infotainment system is mounted high on the dashboard while the AC vents and climate control knobs sit below it. Other highlights include a sleek three-spoke steering wheel and a digital driver’s display.

The production-spec VW Taigun is expected to be powered by the 1.0-litre TSI motor. Expect it to be offered in the same state of tune and gearbox options as the Skoda Vision IN.

The VW Taigun is expected to be rolled out in 2021. It will lock horns with the Hyundai Creta, Kia Seltos and Skoda’s Vision IN.

The Audi A8L made a comeback to India at the Group Night. Priced from Rs 1.56 crore (ex-showroom), the 2020 A8L is offered in a single variant and a single petrol engine. Highlights include relaxation seats for the rear occupants, Audi’s high-tech twin screen infotainment set up and a minimalistic exterior design. It’s also the first Audi in India to be offered with an all-wheel drive steering wheel while the adaptive air suspension comes with various modes to offer the best ride.

Powering the 2020 Audi A8L is a 3.0-litre TFSI V6 petrol motor that develops 340PS of power and 500Nm of torque. It comes with quattro all-wheel-drive and an 8-speed automatic gearbox. Further, this engine comes with a 48V mild-hybrid system for additional torque boost. The Audi A8L can also cruise on pure electric power between 55-160kmph for 40 seconds, aiding fuel efficiency.

For more details about the 2020 Audi A8L, head here to read our detailed launch story.

Automobili Lamborghini’s Huracan EVO was showcased at the Group Night. It's the fastest Huracan EVO yet as it sends 640PS of power and 600Nm of twist straight to four wheels. This tyre shredding machine is high on thrills as well, with it launching from 0-100kmph run in 2.9 seconds before maxing out at 325kmph.

But the main talking point is the price. The Huracan EVO RWD is priced from Rs 3.73 crore, making it Rs 51 lakh more expensive than the recently launched Huracan EVO RWD.

Porsche has showcased the new 911 cabriolet at the event. Earlier, the 992 911 was only available as a coupe in India with prices starting from Rs 1.89 crore (ex-showroom). It comes powered by Porsche’s iconic 3.0-litre flat-six turbocharged motor that develops 450PS of power and 530Nm of twist. Power is directed to the rear wheels and the 911 does the 0-100kmph run in a brisk 3.7 seconds. If opted with Porsche’s Sport chrono package, it shaves off 0.2 seconds off that time! Pedal to metal, the 911 maxes out at 308kmph! Quite impressive when compared to the bigger Lambo Huracan EVO RWD which you read about above.