This is Ferrari’s first rear-wheel drive only V6 plug-in hybrid (PHEV), with the ICE paired to a rear-mounted electric motor 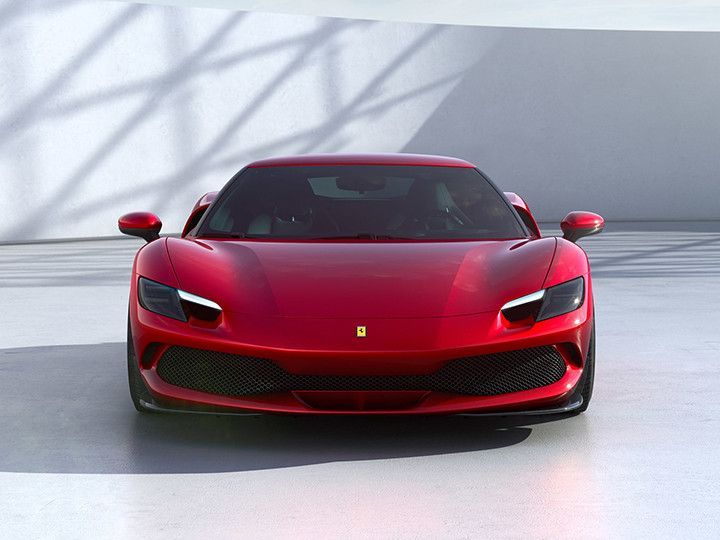 Ferrari has taken the wraps off of its first V6 PHEV and newest berlinetta, the 296 GTB. The latest Prancing Horse from the stables of Maranello has a lot to offer and we are more than happy to take a closer look at what’s new, what’s impressive, and what’s Ferrari. Here is a detailed look at the 296 GTB in ten images:

The name of this model is derived from the 2,996cc capacity and six cylinders in its engine. GTB stands for Gran Turismo Berlinetta, the addition of which puts this model as the latest addition to a legacy stretching back to the 1950s.

Ferrari has armed the 296 GTB with a newly developed 3.0-litre twin-turbo V6 engine. It puts out about 654PS and is claimed to provide a record specific power of 218PS/L. To make things more compact, the turbochargers are fitted in between the cylinder banks, something Ferrari has never done before. Ferrari also claims that the sounds from the V6 are largely similar to that of the carmaker’s V12 in previous models.

In another first for Ferrari, the electric motor is mounted on the rear, just ahead of the 8-speed DCT gearbox, producing nearly 166PS and 315Nm. It is named a MGU-K (motor generator unit - kinetic), derived from F1 terminology, just like in the SF90 Stradale.

Visually, the 296 GTB can easily be identified as a younger sibling of the SF90 Stradale or the Roma. Ferrari has also mentioned inspirations in design have been taken from vintage models such as the 1963 250 LM and the P80/C.

Taking inspiration from the LaFerrari, the active rear spoiler integrated into the rear bumper generates up to 100kg more downforce than previous models. With the Assetto Fiorano package, it packs 360kg of downforce at 250 kmph. The 296 GTB also gets the Stradale’s brake calipers, cooled by air from ducts in the headlights. Ferrari has optimised the front with a more tapered and aerodynamic-friendly design.

At the back, the styling leans towards Coupe and Spider models. The focus on aerodynamic efficiency is evident in the B-pillar, the buttress pairing on either side of the engine bay, and the absence of a rear screen.

Inside, the design is largely similar to the SF90 Stradale. The heavy tech, the minimalism, the concave housing for the digital instrument cluster and steering wheel is all a step away from the designs of yesteryear. The 296 GTB also gets two panels for capacitive touch controls, a head-up display, and a retro H-gate gear shifter.

Don’t let the 50mm shorter wheelbase and 35kg of extra dry weight than the F8 Tributo distract you from the fact that the 296 GTB is a potent sports car. It gets a Transition Manager Actuator (TMA) to make the switch between the two sources of power as unnoticeable as possible. It also gets a new function called ABS Evo controller and a six-way Dynamic Chassis Sensor (claimed to be the world’s first).

The introduction of a twin-turbo V6 on a road car is reminiscent of the Ferrari Dinos from back in the day. However, Ferrari’s aim was not to take a walk down memory lane but compete with other V6 hybrids like the McLaren Artura and the Maserati MC20. The 296 GTB sure does look like it's ready for the fight.