Maserati Gets All Sparked Up With The Ghibli Hybrid: The First Ever Electrified Car By The Trident Brand 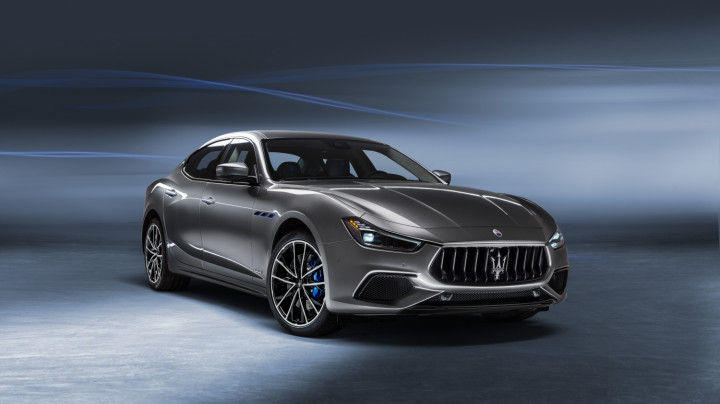 The Italian Trident has taken a fair amount of time to arrive at the “future is green” party, and oh, has it done so in style. The honour of being the first ever hybrid in Maserati’s history goes to the Ghibli sedan. With sales figures of over 1 lakh units since its introduction in 2013, the Ghibli has been somewhat of a flagship model for the carmakers. The recently unveiled Ghibli Hybrid has been developed by the Maserati Innovation Lab at Modena and will be produced at the carmaker's plant in Turin.

To distinguish between the hybrid and ICE-powered models, Maserati has taken the colour coding route. Designed by Centro Stile Maserati, it will mark all its hybrid models with blue characteristics. On the outside, the trademark side air ducts get a blue outline, along with the brake calipers and a blue thunderbolt just below the trident logo on the C-pillar. The interior too gets the blue treatment in the form of blue seams on the seat embroidery and blue-stitched logos on the seats.

The Ghibli Hybrid gets a few updates over its ICE counterpart. The new front grille gets bars which resemble a tuning fork. The rear gets restyled light clusters which resemble the boomerang-like profile seen in the 3200GT and Alfieri concept. Another addition is of the optimised resonators in the exhaust to retain that growl from the mechanical version of the Ghibli.

It gets upgraded features too, with the Maserati Connect program being the new addition to the list. The program allows connectivity and monitoring of the vehicle’s system with constant updates on the move. The touchscreen infotainment system gets an upgrade in the form of bigger dimensions. It now comes with a 10.1-inch screen with Android Automotive, a software that can be fully customised according to the driver’s preferences. Another highlight is the digital instrument panel which gets updated graphics.

Now to answer the question of the hour, what’s under the hood? Powered by a 2.0-litre turbo-petrol engine, the hybrid bit comes from a 48-volt alternator and an additional electric supercharger (dubbed e-Booster), backed by a battery pack. The battery pack also works towards storing regenerative braking energy. All the components work together to put out 330PS and 450Nm with a top speed of 255 kmph. The Ghibli Hybrid boasts a 0-100kmph time of just 5.7 s.

The Ghibli Hybrid is just the first cog in the electric machine as Maserati may have started late, but it has come prepared nonetheless. It has laid out plans to introduce more hybrids and EVs in the future with the next releases being the all-electric GranTurismo and GranCabrio in 2021.