A Brief History Of The Electric Car 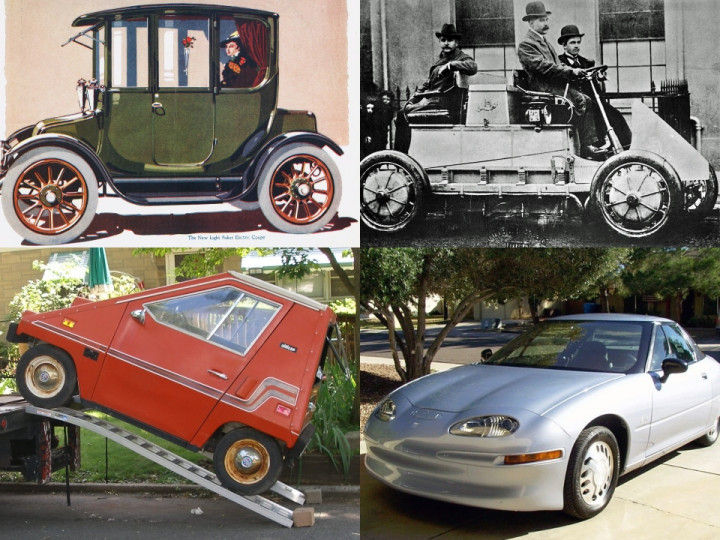 Zero emission cars are the future. Mobile sources of pollution like cars, planes, and ships, have a negative impact on air quality. Carbon dioxide emissions from vehicles cannot be catalysed, and ultimately cause global warming. These are our reasons in the 21st century for looking toward electric cars as our future means of transportation. But what about the turn of the twentieth century? Electric cars had a sizeable share of the market then. Are there lessons we can learn from those times which can help us adopt EVs today? We take a look at the times when government mandates or subsidies didn't decide if people bought an electric car. This is the story of the evolution of the EV:

The invention of the electric motor in 1834 and lead-acid batteries in 1859 meant that electric carriages were already a subject of experiment many years before Karl Benz’s petrol-powered Motorwagen. Thomas Parker built the first production electric car in 1884, just two years ahead of Benz.

What made electric cars so popular back then? Mostly it was ease of use. The alternatives were petrol and steam powered cars. The latter were complex and could take as much as 45 minutes to start on a cold morning. The former required cranking by hand and the need to change gears using complex levers and pedals. Remember, the clutch pedal and single gear lever didn’t exist at the time. There was a curve to learning how to drive a gasoline car which didn’t exist in electrics. You could just get in and drive it. That convenience exists to date.

In the year 1900, about 38 per cent of all cars in the United States were electric. Motorized transportation was a luxury few could afford. Yet, more than 33,000 EVs were registered in the country. Industrial and economic conditions made electric cars more populous in the US than anywhere else in the world. But they were popular in other countries like the United Kingdom, France, and Germany. Fleets of electric taxis were introduced in Paris and London in 1897.

Ferdinand Porsche’s first attempt at making an automobile was an all-wheel-drive electric car called the Egger-Lohner. The first car to break the 100kmph record was an electric car -- Camille Jenatzy’s La Jamais Contente. The Belgian racing driver held that record until it was broken by a steam powered car in 1903. This was the Golden Age of the electric vehicle.

Baker was a popular manufacturer of electric cars at the time. It built carriages upholstered like a parlour, with a foldaway tiller wheel at the centre and large slide-down windows with leather straps. Electric cars like these were marketed towards women. They could only go about 65km on one charge and needed decent roads to ride on. Thus, they were restricted to cities. Several hundred public charging points were littered across New York City in the early 1900s.

Then in 1912, the electric starter was invented, eliminating the need for manual cranking. General Motors offered it in the Cadillac Touring Edition luxury car. In addition, Henry Ford’s Model T revolutionized mass production of gasoline cars. Since they were much cheaper than electrics and could go longer distances, even in areas with dirt tracks instead of roads, petrol car sales increased. Thus began the decline of electric cars.

Petrol cars became popular during this period. More and more countries were producing them. Meanwhile, range and weight issues continued to haunt electric cars. Startups like Kish Industries tried using a plastic body and lead acid batteries in the Nu-Klea Starlite. They ran out of funds before they could put the Starlite into production. Some electric car startups were using bodyshells from regular cars, such as the Renault Dauphine-derived Henney Kilowatt.

Renault Le Cars were the inspiration for the Lectric Leopard. But the most loved car of the 70s was the Sebring Vanguard CitiCar. It was basically a small, street-legal golf cart with tiny wheels and a plastic body. But those were the oil crisis years, and Sebring Vanguard sold more than 4,000 of these fun little urban runabouts.

Efforts to make EVs more popular never translated to decent sales numbers. Electric cars remained a novelty until GM launched the EV1 production electric car in 1990. In the same decade, California’s government started pushing for electric cars, incentivising their buyers and setting sales benchmarks for manufacturers. This sparked a similar movement to the one we see in India in 2019 -- car makers began converting gasoline car platforms to build EVs.

The rise of eco-friendly cars like the Toyota Prius and Honda Insight encouraged people to buy electrified vehicles. It was John Goodenough’s invention of lithium ion batteries which birthed the modern electric car. EVs like the G-Wiz and Nissan Leaf presented affordable new car alternatives to combustion cars in the 2000s. Tesla’s Roadster and later the Model S set new performance benchmarks for EVs. In 2019, John Goodenough was finally awarded the Nobel Prize. EVs are on the rise again.

The Present: Priorities and Strategies

So why has India been insulated from this change? One reason is government support. The EV1 couldn’t have been a successful model line without strict directives from the government. Nissan Leaf sales in the US state of Georgia were driven by cash incentives from the state government to EV buyers. The other reason is that India heavily taxes imported cars. Even now, the Indian government’s interest in promoting electric cars is two-fold: to reduce pollution in urban areas and to establish India as a manufacturing hub for EVs.

We are late to the latter race as well. China is the world’s largest consumer and producer of electric cars. But we can still sort out our pollution problem. Major Indian carmakers like Tata, Mahindra, and Maruti Suzuki are developing production units to build and support EVs. Guidelines set by the government have deregulated the setting up of charging infrastructure. India will welcome a few incentives to EV buyers, awareness about electric cars and sustainable energy, investment in renewable sources of energy, and reduction of industrial pollution. In the process, we are bound to create more jobs and foster a better economy.