The Force Is Strong With This Yamaha XMax 250 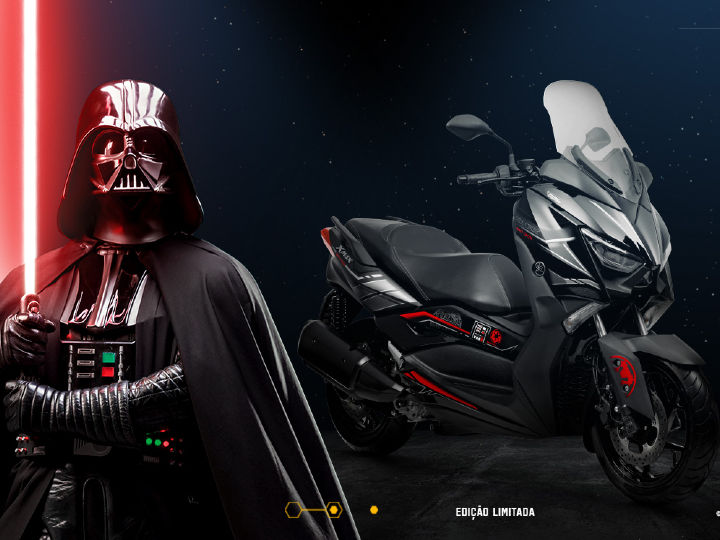 Looks like Yamaha was just a little late to the Star Wars Day (May the 4th be with you) party, as the company just took the wraps off a very limited edition Star Wars-inspired version of their XMax 250 maxi scooter in Brazil. And while even the standard XMax wouldn’t look out of place in the Star Wars universe, this limited edition takes its design cues from none other than Darth Vader himself. So does it live up to the name of the legendary villain?

Right off the bat, it’s important to establish that this limited edition XMax only offers a new paint scheme. The original design of the XMax, with its sharp and edgy lines and aggressive split headlight setup, remains unaltered. What it does get is a very sinister looking black colourway with red accents along the side, and it also features the Galactic Empire symbols on either side of the centre spine as well as on the front mud guard. The sides of the centre spine also sees a graphic of the breathing controls found on the chest of Vader’s iconic black suit.

While it does look pretty sweet, this scooter’s midichlorian count can’t rival that of Sith Lord, as mechanically, it’s exactly the same under the skin as the standard XMax. But if you thought that this is going to be as slow as a Bantha ambling across the sands of Tatooine, then as Vader would say, “I find your lack of faith… disturbing”. With 23 PS and 27Nm on tap from its 250cc single-cylinder liquid-cooled engine, it’s got enough oomph to keep up with Vader’s TIE Advanced. And running on a 15-inch front and 14-inch rear wheel shod with 120/70 and 140/70 sized rubber respectively, the XMax will surely have the handling to navigate deftly through Beggar’s Canyon, bullseyeing Womp Rats with ease.

So if you’re a big fan of the Dark Lord of the Sith, just how can you get your hands on one of these? Well, as we mentioned before, you’ll have to be in Brazil and make your move quicker than the Millenium Falcon doing the Kessel Run, as Yamaha is making only 200 of these. If you’re in India, well then we would recommend getting your hands on a Yamaha Aerox 155 and doing a custom body wrap to show your loyalty to the Galactic Empire… or the Rebel Alliance. Hey, we’re not judging!