Tata’s Tiago now has a rugged cousin. Called the ‘NRG’ (pronounced energy), the cross-hatch has an added dose of toughness that we expect. Changes on the outside include a reworked front bumper with a faux skid plate, some cladding along the side skirts and wheel arches, and some more on the rear bumper and hatch door. Subtler additions come in the form of gloss black ORVMs, matte-black door handles, a blacked out roof and roof rails. All these additions see the NRG being slightly larger in size when compared to the hatchback it is based on. It’s 42mm longer, 18mm wider, and 52mm taller. The ground clearance too has been raised by 10mm (compared to the XZ) and now stands at 180mm.

Step inside the Tiago NRG and you’re greeted by a cabin we’ve become so familiar with in the Tiago and Tigor. The layout and space on offer remains identical to the Tiago. Tweaks come in the form of orange accents on the dash, new upholstery and a new 5-inch touchscreen that’s borrowed from the Tigor. Notably, there’s no Android Auto or Apple CarPlay on offer. Other features are shared with the top-spec version of the hatchback, which means you get steering-mounted audio controls, a stellar 8-speaker Harman audio system, chilled glovebox, manual AC and a detailed MID. Safety kit includes dual airbags, ABS with EBD and corner stability control, all of which is offered as standard. 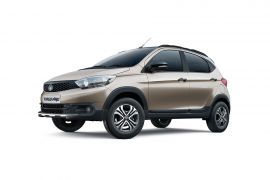