If it ain’t tall and boxy, it’s no SUV, says a vast majority of India’s car-buying junta. Maruti Suzuki has been listening quite intently, as it turns out. The Brezza carries that upright SUV stance and has just the right amount of bling in the projector headlamps, the 16-inch gunmetal alloy wheels and the two-tone paint scheme. Yes, the desi gn can be called safe, but looks like the two lakh-plus buyers aren’t complaining. With the new update, Maruti has also added black alloy wheels in the ZDI and ZDI+ variants.The manufacturer has also discontinued the Cerulean Blue paint for a spunky Orange, which we quite like!

The cabin of the Brezza is thoroughly practical. It’s spot-on in terms of ergonomics and gets the goodies you want, including a touchscreen infotainment system and automatic climate control. It’s big enough to accommodate five people and the 328-litre boot shouldn’t have issues swallowing their luggage. What’s more, you can even play around with colours to personalise the cabin courtesy Maruti’s “iCreate”. 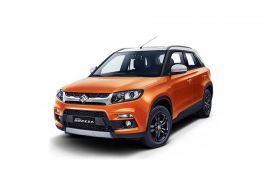