Midsize cruisers are more affordable, practical, yet packed with authentic cruiser DNA. Can Moto Guzzi’s pricey V9 Bobber plead its case convincingly enough? We take a ride to find out. 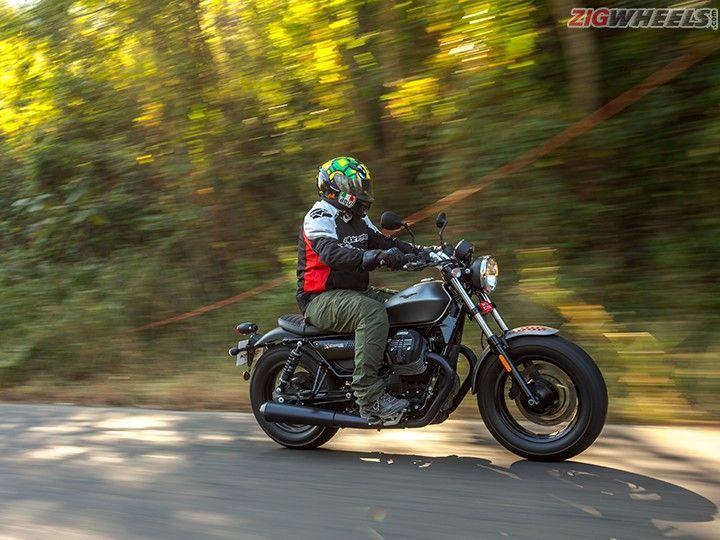 Now, Italian and cruiser isn’t a combination as popular as spaghetti and meat balls but Moto Guzzi have been making them for decades and their products are considered among the best. They have won all the major two-wheeler races from Grand Prix racing to the legendary Isle of Man TT. Moto Guzzi isn’t a brand that is as well-known as Ducati or MV Agusta, but the Italian two-wheeler manufacturer is the oldest European bike maker in continuous production! So, you would have figured out that the Moto Guzzi V9 Bobber has both heritage and history by its side, but does an Italian cruiser make sense?

Like most things Italian, the Moto Guzzi V9 Bobber is a pleasing looking motorcycle. True to the Bobber tradition, it has been stripped off all the non-essential bodywork to make the bike as light as possible. The front almost feels a bit underwhelming, there’s just a simple round headlamp sitting over the regular telescopic forks. Unlike a traditional bobber, the V9 has a front fender but it is a stubby unit while the rear mudguard has that chopped look. The slim tank is a clear highlight, getting a crease like that in metal is art in itself! The quality of the matte paint job is very impressive too. The Moto Guzzi V9 Bobber has an industrial appearance as if it has been built in a garage, albeit with attention on quality.

The fuel filler cap, footrest mounts and even some of the bolts have been machined from a single block of aluminium and looks gorgeous. But we must point out that the beautiful gas cap doesn’t have a lock! The overall fit and finish levels of the motorcycle is impressive, barring a few visible wires and cables.

Swing a leg over and you’re welcomed by an off-set part-digital instrument console. The speedometer take centre stage while the digital display reads out details like trip meter, odometer, average speed, real time fuel efficiency, temperature, gear indicator, traction control settings and clock. It is disappointing that the Moto Guzzi V9 Bobber doesn’t get a tachometer or fuel gauge, though there’s a reserve fuel indicator. The switchgear on the V9 Bobber reeks of premiumness and is among the best seen on a cruiser motorcycle. An interesting trivia is the fact that the switches are the only visible plastic components on the bike!

It also gets a USB port that has been cleverly tucked below the steering head. But the real tech fest is the Moto Guzzi Media Platform (MGMP), which has a smartphone-ready interface that allows the phone to be an add-on display through which the rider can view five parameters. This also includes the missing tachometer, instant power, instant torque, acceleration etc.

The longitudinally mounted V-Twin motor is what distinguishes the Italian bike from other cruisers. The main purpose of mounting the V-Twin transversely was to provide better cooling but in city traffic the engine heat can be worrisome. Also the intake pipe is quite close to the riders knee and a shroud keeps your from bumping it around.  The origins of the same powerplant can be traced back to the late 1960’s. According to the Italian bikemaker, the recent updates to the mill were done to make it Euro 4 emission norm compliant and improve low-end performance.

The 850cc, air-cooled motor delivers 55PS and 63Nm of peak torque. As you would have made out, the engine isn’t about outright acceleration but to make the bike more accessible for mature buyers. Peak torque arrives at just 3,000rpm and it’s the push owing to the low-end torque that is fed slickly by the shaft drive that impresses. This torquey nature also means that even if you are in a gear higher at low speeds, the motor doesn’t buckle under the load and just keeps on chugging, something that one expects from a cruiser. On the highway, the V9 proved to be smooth and tireless, ticking of kilometres at a steady 120kph.

The bike also features two-level traction control system. I found the traction control abrupt and intrusive, and felt the bike performed much better with it turned off. The only benefit we can see is in wet or low grip conditions. Refinement levels of the motor could have been better and the mill is too muted, and for the V-Twin rumble one will have to invest in an aftermarket exhaust system. The 6-speed gearbox works well though it is a bit hard for my liking, and finding neutral in traffic can turn into a riddle. Talking about the Moto Guzzi V9 Bobber returned us an impressive 24.7kmpl on the highway which dropped to 18.2kmpl in cityscape.

Unlike the laid back posture of typical cruisers, on the Moto Guzzi V9 Bobber, you literally feel that you are on top of the bike, like a streetfighter. This can be credited to the flat handlebar and slightly forward set foot pegs, which result in a canted forward riding posture. Saddle height is low at 770mm, something shorter riders will appreciate. The thinly padded saddle looks hot but does feel a bit firm on long rides. Also, remember to choose your pillions carefully as the space is a bit tight.

Given the sporty riding stance, it feels natural to push the bike into corners and you can achieve good amount of lean angle before the pegs start to scrape. The bike employs a tubular steel double cradle frame and handling is impressive. But the heavier balloon type tyre’s feels a bit heavy at low speeds and takes some getting used to.

Nonetheless, the V9 Bobber impressed us with its agility as the wide range of steering movement meant I could weave through traffic easily and the bike masked its 200kg kerb weight well. One complaint about the V9 is its ride quality. The bike is sprung on the stiffer side and one has to tread potholes and undulations with caution. Anchorage is provided by Brembo-sourced 320mm single disc at front, that offers brilliant stopping power and feedback, while the rear has bite but feels numb, while ABS is standard.

The Moto Guzzi V9 Bobber is a characterful motorcycle and its most interesting aspect has to be the way the bike corners, which is a revelation for other cruiser offerings. The minimalistic styling and the attention to detail is something that most bikers will appreciate. It is among the few cruisers on sale in the Indian market today that can be used on a daily basis. But one look at the price tag and things start to go downhill; the Moto Guzzi V9 Bobber has been priced at Rs 13.9 lakh (ex-showroom Pune), which is more than the epic Suzuki Hayabusa!

In terms of displacement and nature, its closest rivals are the Indian Scout Sixty, Triumph Bonneville Street Twin and Harley-Davidson Roadster, which are significantly cheaper. Also, the Moto Guzzi brand isn’t a popular name in the Indian market and the fact that it is sold through Motoplex means the dealership network is restricted. As impressive and desirable as the Moto Guzzi V9 Bobber may be to look and ride, its appeal will be limited until Piaggio decide to assemble these motorcycles in India.