Is Honda’s Jazz-based WR-V the rugged machine that cross hatches have always promised to be? We take a first drive to find out 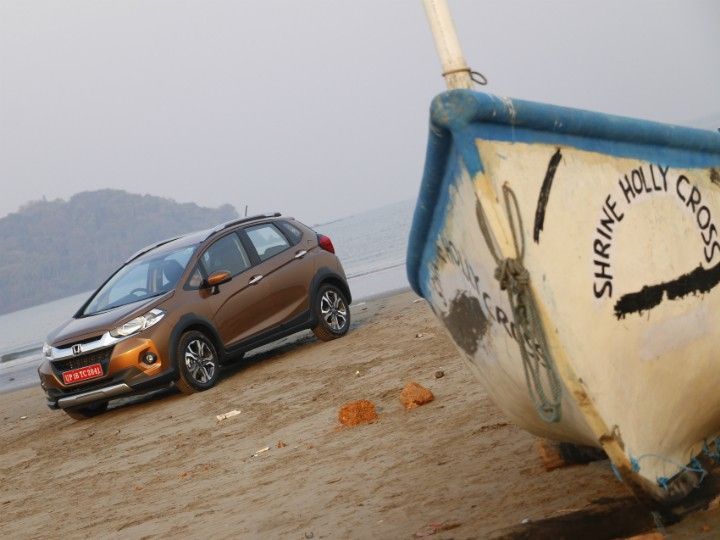 What’s the difference between compact SUVs and cross hatchbacks? A lot, or little? Both are  derived from hatchbacks and promise a more rugged, SUV-like experience. At the end, it is the experience that counts, which is why cross hatches with obvious hatchback genetics aren’t as  popular as the more masculine compact SUVs. However, Honda is looking to rewrite the cross hatch recipe for India with the new WR-V. Although it is based on the Jazz, the WR-V has been thoroughly re-engineered to make sure that not only does it look different and rugged, but feels that way too. So, does it?

How different is the WR-V from the Jazz?

The short answer is, the differences are more than skin deep. And even a glance suggests the changes on the surface are extensive too. The Jazz is sleek, this is blunt. You see, the nose is all new, and includes a bonnet that sits higher and is flat. It caps new chunky headlamps with LED DRLs. In between the lamps there’s a thick bar of chrome for a bigger statement. The fender is all new -- it is squared and flared at the edges. The faux skid-plate in silver adds to the visual appeal. The rear, too, looks dramatically different, with large three-dimensional tail lamps that flow into the re-skinned tailgate. The bumper, too, is more rugged, with a silver skid plate here as well.

When viewed from the side the WR-V’s connect to the Jazz becomes obvious. The doors and the  panel stretching from the A-Pillar to the C-Pillar is the same too. However, the plastic roof rails, the generous cladding for the wheel arches and the rocker panels make it look more adventurous. If you  are looking for irrefutable proof, try arguing with 44mm, 57mm and 40mm. That’s the increase in length, height and width over the Jazz. So the WR-V looks tough and while the increase in size is indistinct, but perceptible, it doesn’t have the high stance and the same road presence as a Ford EcoSport or a Maruti Suzuki Vitara Brezza. But, in a playground of cross hatches this would be the boss.

No, it isn’t. The extent of changes is enormous compared to other cross hatches. The WR-V, like  you would want from an SUV or SUV-like machine, has healthy ground clearance. Its 188mm is 23mm more than the Jazz and 10mm less than the Brezza. The WR-V’s wheelbase is also longer than the Jazz by 25mm. The 2555mm-long footprint is more than that of any cross hatch or compact SUV! Honda engineers achieved this by moving the front and rear suspension mounting points further outwards. Along with a longer footprint, the WR-V also has a wider foot print as it has a wider track. Part of it is due to the wider 190-section tyres, but also because of new suspension components that have been derived from the HR-V. The WR-V also uses larger 16-inch wheels, instead of the 15-inch wheels on the Jazz. While on the topic of differences, the WR-V’s boot has 363 litres of  storage, which is 9 litres more than the Jazz and a lot more than most compact sedans and compact SUVs too.

But, does it feel any different when you get in?

Not really. Most importantly, you don’t feel like you are sitting much higher than in a hatchback. Also, the cabin layout feels very familiar as it carried over from the Jazz. So, while it feels well built, the plastics are a bit tough. However, the WR-V packs in a few extra features that are seen on the City.

So is it well equipped?

The WR-V’s party piece is its single-touch opening sunroof, a first in class. There is a new 7.0-inch ‘Digipad’ infotainment system from the City. This Android-based system has inbuilt navigation, 1.5GB of internal storage, two USB ports and a HDMI port too. The system offers lots of customisation such as choosing the shortcuts on the homescreen, or wallpapers. However, in our experience the system felt just a bit slow to respond to inputs.

Also, the automatic climate control system offered on the top-end VX variant offers the wow factor. However, it is distracting to use while driving as you need to take your eyes off the road to change settings. Some indentations or textures would have helped make the process easier. However, the addition of a rake and reach-adjustable steering, ABS and dual airbags as standard is very welcome.

The WR-V also gets two colour options for seat fabric and door pads. As can be expected, the WR-V, like the Jazz, is an incredibly spacious car. Only the tallest of occupants would miss the headroom that has been eaten away by the sunroof on the VX variant. Even 6-footers should find spending time in the second row fairly comfortable. However, sitting three abreast will be a bit of a squeeze. Interestingly, Honda’s Magic seats, which could be flipped or folded to either improve seating comfort or enhance storage capacity, have been done away with.

The WR-V, like the Jazz, is offered with two engines: the 1.5-litre diesel that comes mated to a 6-speed manual gearbox and the 1.2-litre engine with the 5-speed manual. The petrol and CVT combination isn’t offered here. First we drove the petrol -- it makes the same 90PS of power and 110 Nm of torque as on the Jazz. However, it has to deal with an extra 62kgs here. To keep drivability from suffering Honda has used revised gear ratios and a beefed-up gearbox derived from the BR-V.

On the road the responsiveness didn’t feel any better, or worse, than the Jazz. The engine feels smooth and calm while keeping pace with city traffic. But if you need a sudden change in pace pressing down on the accelerator offers no respite. To really get going you will have to use the short-action gear lever to go down a gear, or two, and use the revs to get going.

In terms of fuel efficiency Honda claims the petrol WR-V can deliver 17.5kmpl -- that is 1.2kmpl lower than the Jazz. So, although the WR-V is being pitched as a car to complement an active lifestyle, the petrol variant is best used for commuting calmly in the city.

The diesel engine has the same power and torque output as the Jazz and the City. However, on the WR-V it uses a lambda sensor to clean up emissions further. The diesel WR-V is also heavier than the Jazz by 31 - 50kgs and that has also called for tighter gear ratios to maintain drivability.

This engine is very easy to get along with. Making your way through the urban crawl won’t be a bother as there is so much responsiveness low down in the rev range. Getting up to higher speeds and maintaining them is no hassle either as there is strong power on tap too. While the engine doesn't like to be revved too much, the real issue here is that its diesel clatter is quite obvious in the cabin. Honda claims a fuel efficiency of 25.5kmpl for the diesel, again, slightly lower when compared to the lighter Jazz.

Nonetheless, if you want to script tales that span far and wide, the diesel variant of the WR-V should be your preferred companion.

So it can wander, right?!

With a beefed-up chassis, longer-travel suspension, larger rims and bigger tyres the WR-V holds promise. It was immediately apparent that the WR-V could tackle manholes, potholes and ditches very well. It soaked up the worst of shocks with only the slightest of thuds creeping into the cabin. With the healthy ground clearance the WRV can be comfortably used for some mild rough roading.

However, while cruising on the highway the petrol WR-V tends to feel a bit restless. It tends to bob and rock a bit; we suspect the taller ride height and the softer suspension setup is responsible for this. The diesel variant feels better tied down as it has a slightly firmer suspension setup to deal with the greater overall weight. It also feels nicer to drive through a set of flowing corners as it exhibits less body roll. Despite the revised steering hardware, the WR-V didn’t feel particularly enthusiastic to steer.

Nonetheless, straight line stability is good and it has good grip too. No doubt the 2555mm-long wheelbase, longer than the compact SUVs as well, helps impart that confidence. The inclusion of ABS and airbags as standard boosts that sense of confidence even higher.

And the bottom line is...

... if you are looking at getting yourself a Jazz, the WR-V deserves a closer look. It is definitely better suited to tackle our roads, and as such is more versatile than the Jazz. Just don't expect the WR-V to tackle any serious mud plugging. However, the WR-V does offer more in terms of appeal and equipment. We expect the WR-V to be priced Rs 70,000 - Rs 1,00,000 over the Jazz, and that would well justify the extra kit and attitude that the WR-V has to offer. However, when compared to the more square and upright compact-SUVs in the market today, the WR-V’s appeal seems to dim. And, when you factor in the expected price, Honda’s WR-V  ends up feeling like a bit of a hard sell.