We ride the new Dark Custom trio of the Harley-Davidson Street 750, Iron 883 and the Forty Eight on the busy streets of Tokyo 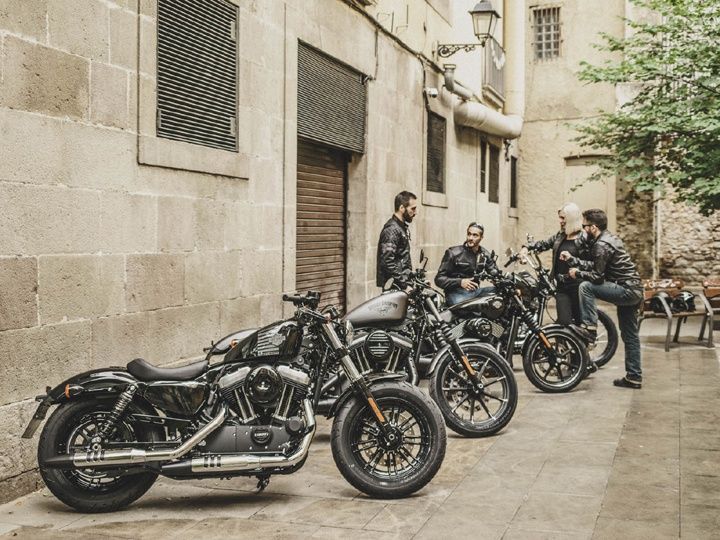 It is said that change is the only constant in life and Harley-Davidson seems to adhere to this thought rather seriously. 2014 was a great year for Harley-Davidson India as they rode in the Street 750 and many other products along with constant dealership expansion. Despite the healthy sales, the American bikemaker felt that it needed to improve its current portfolio. And for this purpose rode in the updated versions of its motorcycles under the Dark Custom moniker. In the Indian context, the models under Dark Custom range include the Harley-Davidson Iron 883, Forty-Eight and the Street 750. The motorcycles haven’t undergone a drastic evolution but subtle updates based on customer feedback to further refine the offerings. We were invited to ride the refreshed Dark Custom range through the glitzy streets of Tokyo in pouring rain which wasn’t the most perfect day for riding but it definitely added a fun quotient to the journey.

We will concentrate our attention on the most important of the refreshed Dark Custom range – Harley-Davidson Street 750. The Street 750 is definitely the most important product in its Indian portfolio given the fact that it’s the first motorcycle to be manufactured outside USA. It showcased to global performance bikemakers that one can manufacture world class motorcycles in India and localization will help them in keeping cost under check. The Harley-Davidson Street 750 that we rode was the Japanese-spec model with Michelin tyres and modified tall gear ratios to meet the Japanese homologation rules. In terms of appearance, one cannot differentiate the new refreshed Street 750 from its predecessor unless until you have opted for the new blue shade that looks good in flesh. We would have preferred some physical changes to the new bike so as to differentiate both the machines but since it’s a facelift Harley boffins felt it wasn’t necessary. Anyways the overall design of the bike is good and seems to have clicked among the masses given the sales figure.

The biggest change in the new Harley-Davidson Street 750 is the revised rear disc brake. The rear brake on the older bike lacked bite and feedback which was a bit worrisome given the enthusiastic performance on tap. Gladly, Harley-Davidson engineers have addressed this issue and introduced a new Brembo system. And the difference can be felt right away, less force is required on the pedal and the braking is more progressive with good feedback. One thing that is disappointing is the lack of ABS. According to Harley officials ABS was given a miss to keep cost under check but it should have at least given as an optional extra given the fact that they have revised the whole system and it will be made mandatory from 2017.

Among the other highlights of the Harley-Davidson Street 750 is the enthusiasm with which it corners. The bike we rode was sporting Michelin Scorcher tyres. Despite the extremely wet conditions they provided excellent grip and I am sure the above tyres can further improve the handling dynamics of the Street 750 as they are considerably better than the stock MRF sourced tyres. Harley claims that they have tightened up the loose wires and cables running around the bike which was somewhat of an eye sore on the older model. But sadly we couldn’t really see any difference on the new Street 750 and lose wires are still visible. No changes have been carried out on the mechanical front, which is fine given the ample power and punch the motor has on offer. The overall updates made on the new Street 750 are limited but the upgradation of rear brake is a welcome move. The Harley-Davidson Street 750 is also among the best-rounded products from its portfolio and the new updates should further help in elevating its sales figure.

Prior to the Street 750 entering our market, the Harley-Davidson Iron 883 was its highest selling motorcycle. And despite the introduction of the Street 750, it continues to gather decent sales figure owing to the appeal of its air-cooled motor and great styling. Part of the update, the Iron 883 and the Forty Eight receive minor cosmetic touches and a revised rear suspension setup. Riding dynamics remain satisfactorily with good grunt on offer from the V-twin motor and decent handling as we pierced the Tokyo traffic on the Iron 883.

While the Harley-Davidson Forty Eight has oodles of torque for punchy acceleration but the fat section front tyre compromises handling somewhat. The most vital update on the Harley-Davidson Iron 883 and the Forty Eight is the new adjustable rear suspension. Honestly we couldn’t gauge the impact of the new suspension on the butter smooth roads of Tokyo and we will have to ride them on our tarmac to better understand them. Overall changes on the new Dark Custom range are limited but they are a step in the correct direction of improving the motorcycles and the updated range is already on sale in the Indian market.