With the launch of the Chevrolet Trailblazer, GM in India will finally a have a car to take on the likes of the Toyota Fortuner, Mitsubishi Pajero Sport and the new upcoming Ford Endeavour 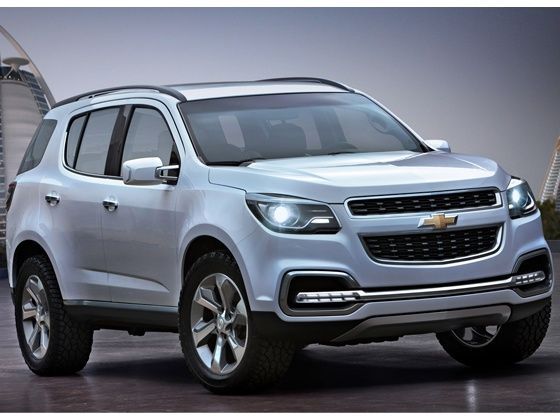 Chevrolet’s large SUV in India so far has been the Captiva. Although considerable in dimension, it always lacked the road presence that came along with the likes of the Toyota Fortuner or the Mitsubishi Pajero Sport. Now though, the American automotive giant will finally bring a full sized SUV to India later this year. The new Chevrolet Trailblazer will be available in India in 2015 at a price tag of about Rs 20-25 lakh.

First previewed in concept form at the 2011 Dubai International Motor Show in the Middle East, the Chevrolet Trailblazer is based on General Motors' new global body-on-frame midsize truck architecture. With the Trailblazer, Chevrolet aims to offer a premium SUV, which offers great ride comfort and handling along with superior off road capabilities.

On the exterior front, the Trailblazer is what American auto manufacturers like Chevrolet do best. The hair chested and bulky SUV has been made to look tamer with its prominent yet pulled back headlamps that feature a daytime running light and projector setup. But there is no mistaking the aggression that the Trailblazer brings to the table with its muscular haunches on the bonnet. The split grille is unmistakably Chevrolet with its split look and the large bowtie logo bang in the centre. Our favourite styling feature though has to be the ultra wide wheel arches both in the front and in the rear that offer a hunkered look to this large SUV. That said, a new set of slightly sleeker wheels would make a huge difference to the way the Trailblazer looks.

Around the back the Trailblazer continues with its good looks and great proportions. The LED tail lamps looks particularly good and look like they belong on an UV a class above the Trailblazer. The recessed tail gate handle too is a great touch and looks apt on this modern SUV. The chrome accent pieces on the rear bumper that fuse into the exhaust pipes also look quite interesting and again remind us from the SUVs from the Mercedes-Benz stable.

On the interior front, the Chevrolet Trailblazer looks like an ultra modern lounge on wheels. With mood lighting on the dashboard, door cards and roof combined with the blue glow from the instrument cluster and the centre console, the Trailblazer’s interior is a good place to be in. However, it is uncertain if these features will make it to India. In our opinion, Chevrolet should leave the car as it is for India without fidgeting too much with the interior styling if they intend to attract a large customer base.

Thankfully, the Chevrolet Trailblazer is a good ol’fashioned seven seater SUV. Expect leather to be everywhere in the Trailblazer, most probably finished in a shade of cream or beige to appease Indian customers. The second and third row of seats can fold flat down and offer a cavernous loading bay. A number of storage compartments are located throughout the interior, including a covered centre bin for the concealment of valuable items, and a large dual glove box.

GM’s all-new family of Duramax four-cylinder turbo-diesel engines will power the Chevrolet Trailblazer, featuring 2.5-litre and 2.8-litre displacements. Both engines will incorporate variable geometry and a balancer shaft for maximum power and smoothness. The 2.8-liter engine makes 180PS of peak power and 470Nm of torque while the 2.5-litre motor will feature 150PS of peak power with 350Nm of torque.

A choice of two drive trains will be offered, a five-speed manual transmission and a six-speed automatic featuring electronic shift control. There will also be an all-wheel-drive and a two-wheel-drive version of the Trailblazer that will be offered to Indian customers.

The Chevrolet Trailblazer has been made for both on and off road conditions with equal ease. Although we would have expected a monocoque construction, the car still features a more conventional and more robust body on frame design. That said, the Trailblazer features a multi-link rear suspension that helps with better ride and handling. Combined with a coil spring setup that offers great articulation, the Trailblazer is bound to be an extremely comfortable way of getting around.

From the levels of equipment that the new 2015 Chevrolet Trailblazer has to offer, we peg this large brute of an SUV to be priced between Rs 20-25 lakh. We could also possibly see more expensive all-wheel-drive versions that will cost closer to Rs 30 lakh, taking the fight directly to the likes of the Toyota Fortuner, Ssangyong Rexton, Mitsubishi Pajero Sport and the soon to be launched new Ford Endeavour. All in all, the 2015 Chevrolet Trailblazer is certainly a car to look forward to!