We know that EVs are fast enough to give ICE-powered cars a run for their money, but which one is the fastest? 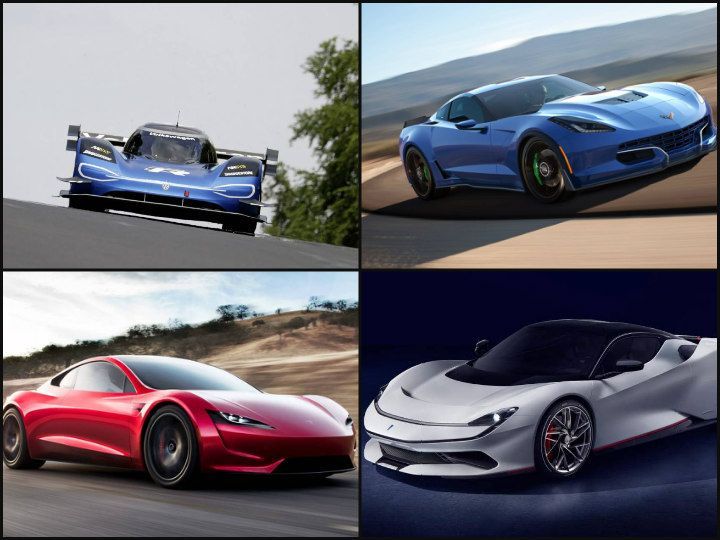 When electric vehicles started creating a buzz in the automotive industry, many purists felt disdain for them as they were deemed painfully slow, having low range and lacking the emotions of a screaming internal combustion engine. Electric vehicles have come a long, long way since then. In today’s day and age, EVs are slowly making inroads into the ICE (internal combustion engine) car market. With reduced moving parts and instantaneous torque, today’s EVs are giving even the most powerful ICE cars a run for their money. From supercars, to hypercars, to track-records as well as land speed records, today’s electric vehicle record holders now boast power outputs over a 1000PS with sub-2 second 0-100kmph launch times.

With emission norms getting stricter with every passing year, carmakers are realising that going electric is the only way forward and have made an aggressive push to introduce EVs within the next 10-20 years. Sure, EVs have come a long way but which one of them holds the title of the fastest EV? Here’s a look at the 10 fastest electric vehicles from past, present as well as the future:

Formula E is basically the electric answer to Formula One. Formula E made its debut in 2014 with the first-gen car running for four seasons. The first generation of Formula E race cars were criticised for being slow and low on range, which resulted in car swaps mid-race. Season 5 changed all that with the second generation of the Formula E car. With ever evolving technology, the Gen2 car can last an entire race distance of 45 mins + 1 lap. It now packs 354PS of power thanks to a bigger 54kWh battery and goes from 0-100kmph in less than 3 seconds. Its power figures may still be a far cry from its ICE counterparts, but with better aero and battery development, Formula E is on the right track to possibly replace Formula One as the pinnacle of motorsport.

The first all-electric Aston Martin made its debut at the 2019 Formula E Monaco E-Prix.  While it may look like a regular Rapide, it is powered by two electric motors on the rear axle making 610PS of power. It propels itself from 0-100kmph in less than four seconds and tops out at a modest 250kmph. Only 155 units are to be made at Aston Martin’s St. Wales factory in the UK and each will command a price tag of 250,000 pounds (Rs 2.20 crore, excluding taxes).

Set to launch in 2020, the second iteration of the Roadster looks to drop a bombshell on all types of supercars - electric or ICE. Tesla claims that the Roadster will blitz from 0-100kmph in 1.9 seconds and achieve a top speed of over 400kmph. Apart from its performance, this Tesla also boasts some impressive range thanks to a triple electric motor and a 200kWh battery, giving it a range of nearly a thousand kilometres on a single charge. The reason why this potential beast is not higher up is due to the fact that its technical specs seem too good to be true.

This concept car made by finnish automaker Torodion was unveiled in 2015. Toroidion claims that it boasts 1360PS of power, which is enough to accelerate the car from 0-400kmph in a whopping 11 seconds. Prices haven’t been revealed yet, but it could go towards the seven figure range if it makes it to the production line.

The bodywork of the GXE may look like a Corvette but its chassis and gearbox components are all developed by Genovation themselves. With a power output of 811 PS, the GXE has a claimed sub-3 second 0-100kmph time and a top speed of 336kmph. This makes the Genovation GXE one of the fastest street-legal electric production vehicles in the world. It also gives a range of 281km thanks to a 61.6kWh battery.

The Battista was unveiled at the 2019 Geneva Motor Show ahead of its debut in April at the Goodwood Members Meeting in the UK. The Battista is set to be one of the most powerful production vehicles in the world with a Rimac powertrain delivering 1898PS of power and 2300Nm of torque via four electric motors. The electric motors propel the Battista from 0-100kmph in less than two seconds and tops out at 350kmph, which puts it into peak supercar territory. Its top speed may not rival the hypercar segment but its eye-catching features surely would be the beautiful bodywork sculpted by veteran car designing firm (and now a proper car manufacturer) Pininfarina.

The replacement to the Rimac Concept One, the Rimac C_Two is a car designed from the ground up which of boasts hypercar beating numbers. It produces an insane 1914PS of power and 2300Nm of torque. It propels the Rimac C_Two from 0-100kmph in 1.85 seconds and tops out at 415kmph. The C_Two gets a 120kWh battery which gives it a range of 643km.

Launched in 2016, the EP9 is a hypercar made by Chinese manufacturer Nio - previously known for its participation in Formula E. This beast delivers 1360PS of power via electric motors on each wheel which propels it from 0-100kmph in 2.7 seconds and tops out at 350kmph.

Sure, the Nio EP9 may not boast mind-boggling figures but the real highlights are its advanced aerodynamics and carbon-fibre FIA LeMans Prototype complying chassis. The Nio EP9 holds the 2nd fastest EV lap record at the famous Nurburgring circuit in Germany, giving many supercars like the Porsche 918 a decent run for their money. The Nio EP9 may be considered the fastest road-legal electric production car around the ‘Ring’, but its production status is questionable since only six of them have been sold with no word on further sales.

Volkswagen’s first purpose-built electric racer, the ID.R, has been smashing lap records left, right and centre. Its first victim was the Pikes Peak International Hill Climb record, which was broken in July 2018 with a lap time of 7:57.148 seconds. It went on to set a new electric car record at the Goodwood Hill Climb and then conquered the green hell too! The Volkswagen ID.R is the fastest all-electric car to lap the Nurburgring and the second-fastest overall with a lap of 6:05.336.

Recently, the ID.R achieved another milestone by beating its previous record at the Goodwood Hill Climb. With a lap time of 39.90 seconds, it beat the 20-year-long record set held by Nick Heifield in the Mclaren MP4/13 Formula One car. The ID.R’s fast times are not down to pure power - it only develops 680PS of it - but from a highly modified light chassis and track/event specific aerodynamic tweaks.

Imagine the legendary land-speed record-breaking Thrust SSC supersonic car, but in an all-electric form. That’s what the Buckeye Bullet 3 is all about. Co-developed by Venturi and the Ohio State University, the Buckeye Bullet 3 achieved a record top speed of 549.43kmph in 2016. Credit goes to its two electric motors, slippery aero and a drag coefficient of just 0.13cd. It is still a long way from the 1,228kmph record by the Thrust SSC, but it is still the fastest electric vehicle in the world.

We have only scratched the surface of what is possible with all-electric mobility. Electric cars are definitely the future of automobiles and can provide a good balance of low emissions and high-performance motoring unlike the gas-guzzlers of today.