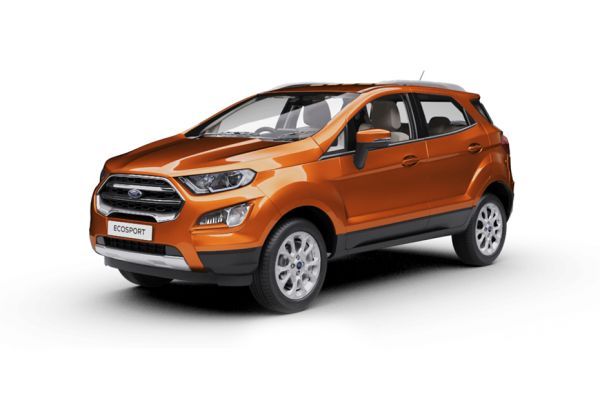 Ford has launched BS6 variants of the EcoSport sub-4 metre SUV in India. The SUV’s prices have been hiked by Rs 13,000 across every variant barring the Titanium petrol. The standard features list of every variant is now more lengthy. A new 3-year/1 lakh km warranty will be standard on the BS6 EcoSport.

It is powered by BS6-compliant 1.5-litre petrol and diesel engines. The updated 1.5-litre TDCi diesel engine makes 100PS and 215Nm, 10Nm more than before. On the other hand, the Ti-VCT petrol engine now makes 122PS of power and 149Nm of torque, 1Ps and 1Nm lower than before. Transmission options consist of a 5-speed manual and a 6-speed automatic transmission exclusive to the petrol engine. The engines are also slightly less fuel-efficient than before with the petrol manual and automatic variants claiming figures of 15.9kmpl and 14.7 kmpl, respectively. The diesel’s fuel economy is claimed to be 21.7kmpl, down by 1.3kmpl.

The Ecosport is currently offered in a total of six variants: Ambiente, Trend, Titanium, Titanium Thunder, Titanium+ and S.

It rivals the likes of the Mahindra XUV300, Hyundai Venue, Maruti Suzuki Vitara Brezza, and the Tata Nexon.

Q. Which car should i buy.. Creata or eco sport or Jeep compus? View All Answers
Q. Is there a way to open the back door from inside the Ford EcoSport 2018?
Q. For Ford EcoSport titanium BS6 , difference between petrol & diesel variant is only 33 thousand .In this case, which variant is good ,if I am planning to keep the car for 8 years with usage of 250 km-300 / month petrol variant or diesel?
Q. Which variant are you using and I am having titanium - EcoSport?
Q. Please suggest where I can find Ford Ecosport BS4 in Thane?
Q. I have booked an EcoSport Thunder, petrol and waiting for delivery. Will you please suggest, is it a better choice for me. My annual driving is not more than 5000 km.
View More Questions
Q. Is Nexon best to buy, Will I get a good resale value after 3 years and is Tata Nexon better then Ford EcoSport, Honda WRV, Hyundai Creta & Maruti Brezza View All Answers
Q. How is the performance of Tata Nexon petrol engine? I am bit confused which car to buy ecosports titanium plus petrol, XUV300 W8 or Nexon XZ petrol? Which car will be good in terms of mileage and performance?
Q. Which is better Ford EcoSport or Tata Nexon View All Answers
Q. Which is best for performance EcoSport or WRV (petrol version)? View All Answers
Q. My budget is 10.5 lakh. My running is 10 to 14 KM's per day. Confused between Venue SX Turbo petrol and Ford EcoSport 1.5 petrol Titanium. Which is the best value for money model. View All Answers
Q. Which car is better EcoSports or Nexon? View All Answers
View More Questions
All EcoSport Questions and Answers

What is the price of Ford EcoSport Top Variant?

The ex-showroom price of top variant of Ford EcoSport is 11.58 lakh (Delhi).

What is the mileage of Ford EcoSport?

What is the EMI of Ford EcoSport in Delhi?

What are the top competitors of Ford EcoSport?

What is the boot space in Ford EcoSport?

The boot space in Ford EcoSport is 352-litres. View full specification of EcoSport

What is the ground clearance of Ford EcoSport?

The ground clearance of Ford EcoSport is 200mm.