Miami is known as a city that loves its convertibles, and we're just back from driving the newest supersport convertible, the Lamborghini Huracan LP610-4 Spyder there 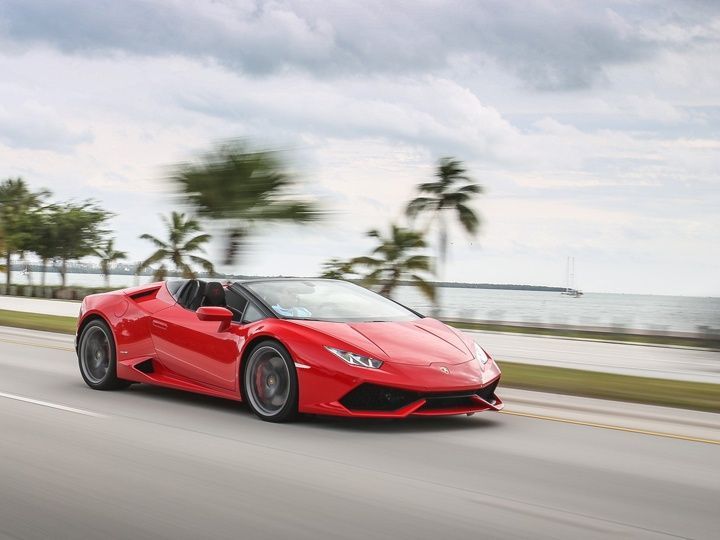 Miami brings to mind sun-kissed beaches and lifestyle like few other cities do. It is popular with vacationers, sun bathers, party-goers and the like, who flock to this city to get away from the hustle of their routine lives. The mention of Miami even brings to mind one of my favourite Hollywood flicks, Transporter 2 which has a chase sequence where Jason Statham is furiously piloting a Lamborghini Murcielago Roadster around town.

Was it mere coincidence that Lamborghini chose the city for the global dynamic launch of its newest convertible, the Huracan LP 610-4 Spyder? Of course not. Lamborghini’s sales have grown steadily in the last few years, and it delivered 3245 cars in 2015 the world over. Of these, 1009 cars were sold in the USA, which is one-third of its global sales. The Huracan obviously has been a huge contributor to those numbers, and that’s reason enough for Lamborghini to have chosen Miami as the launch venue.

That’s besides the fact that Miami is also known for topless cars – given its pleasant weather, affluent dwellers of the city prefer their sportscars with the top down. And that’s besides the fact that Miami boasts a nude beach, one of the most famous ones in the USA. Read up on the internet about the Haulover Park and you’ll know what I’m talking about. That’s a topless variety I’d give a miss for a topless Lamborghini though. Admittedly, traveling across the world for over 30 hours was tiring, but the sight of Huracan Spyders lined up in myriad colours outside the swanky W Hotel on South Beach worked its charm on me instantly.

Passers-by couldn’t have enough of the car either, constantly clicking pics of the Huracan Spyder in the parking lot. And that the Huracan was designed with a topless version in mind helped I suppose, as Lamborghinis says changing to the retractable soft-top didn’t call for too much additional reinforcement for the aluminium and carbon fibre composite frame. Maurizio Reggiani, R&D Head at Lamborghini explained how they’ve retained over 90 percent of the structural rigidity of the coupe to ensure driving pleasure doesn’t take a hit. In terms of weight gains the Spyder has put on 110kg, but that’s something you’d probably notice only if your nemesis shows up in the Huracan coupe for a drag race. All you need is 17 seconds to retract the hood, and that can even be done on the go, at speeds up to 50kmph.

The Huracan’s edgy lines suit the Spyder better I felt, and its front and rear three-quarter are the most enticing angles to look at the car. There’s a sense of raciness even at standstill with the flared nostril-like front, dual Y-shaped headlights and of course the air scoops just after the doors. There’s a retractable glass pane behind the seats to cut wind buffeting, and it works well in conjunction with the fabric skinned ‘ears’ or extensions that sit next to the outer edge of both seats.

The rear is as arresting as ever, thanks to the sharp design. That said, your view in the inside rear view mirror is reduced to a sliver since the area behind the seats where the roof folds is taller than the coupe. The interiors are as sporty as you’d expect – the setup is the same, complete with the fighter jet inspired ignition switch. Lamborghini says a lot of work also went into cutting wind noise down, and claim you can have a conversation with the top down even at over 100kmph.

Inside, the Huracan Spyder greets you with loads of carbon fibre and Alcantara. The large display screen behind the Alcantara-wrapped steering wheel is a feast for the eyes with its programmable settings, one of which include a large, centrally displayed tachometer with the gear indicating numbers for the 7-speed dual clutch transmission in an eye-catching manner. The steering wheel is a delight to hold, and along with the long, steering column mounted paddle shift levers offers a racy driving position.

The moulded carbon fibre seats look the part, but weren’t as comfortable as I would have liked, and caused a mild backache. Also, the seat only slides forward or backward, and its height cannot be adjusted. As a result, each time I stopped exactly at the white line on a traffic light I had to crane my neck above the windscreen to see the lights. In case you were wondering, there’s just enough space for a small duffel bag under the hood in front.

With 610PS of power and 560Nm of torque, the Spyder’s outputs are the same as the coupe though it is a smidgen slower to 100kmph, Lamborghini claiming 3.4 seconds to hit the ton from standstill. As if we care – this is a car to be seen in – after all someone buying the Spyder is spending the extra moolah only to be seen, no? Claimed top speed is 324kmph, and the engineers at Sant’Agata have ensured you could hit the speed even with the top down. The Spyder is high on safety as well and gets a pair of retracting rollover bars behind the seats that are up in milliseconds to protect occupants, should you be insane enough to flip this four-wheel drive sportscar.

I was far, far away from testing any of the limits of the car, as we only drove the Huracan Spyder around Miami city, with most speed limits in the region of 30-35mph, which translates to not more than 60kmph. What it allowed me to experience though was the ease of driving a 610PS sportscar in city traffic and the comfort it offered, especially in Strada mode. The Spyder gets the same three modes as the coupe, namely Strada, Sport and Corsa, and these can be changed via the switch on the steering wheel. Strada mode feels relatively comfortable, with only mild thuds over manhole covers and surface changes on the road.

Sport and Corsa modes make the ride progressively harsher but also liberate the decibels and tune the power delivery, suspension and steering response accordingly. Later in the day we were on the outskirts of the city where we finally got a chance to let the 610 ponies loose, and every single journalist was seen getting his fill of the naturally aspirated V10’s beautiful soundtrack and heady performance. With its kind of flexibility, the Huracan Spyder is sure to attract buyers wanting a sportscar that offers the kicks you want from a Lamborghini, but also ensures you are seen in it.

Not a bad car to drive to work every day or to the club on a Saturday evening I thought to myself, especially with the kind of attention I got in the Huracan Spyder. Every other minute I had passers-by and pedestrians wave out, give me a thumbs-up or ask me to rev the motor for that oh-so-sweet soundtrack. I did manage to accelerate hard from some traffic lights, and the adrenaline rush plastered a grin on my face quicker than you could say ‘Lamborghini Huracan LP610-4 Spyder’. It also ensured I saw people in my rear view mirrors cheer me as I blew past. Heck, I even had a guy in a Cadillac Escalade with his girlfriend pull up next to me at a traffic light and ask me jokingly if we could swap cars.

Lamborghini is claiming the Huracan Spyder is friendlier and more forgiving than the Gallardo Spyder, which was one of its best-selling cars ever. I haven’t driven the latter, but the Huracan Spyder felt perfectly drivable in city, not to mention apt to blister a race track. We expect Lamborghini India to launch it here soon. Prices for the Huracan LP610-4 coupe in India begin from Rs 3.43 crore ex-showroom, and the Spyder should command a small premium over it – relatively that is. But for that extra cash you will get a supersports car that will thrill you, satiate your need for speed and also ensure the paparazzi are happy.