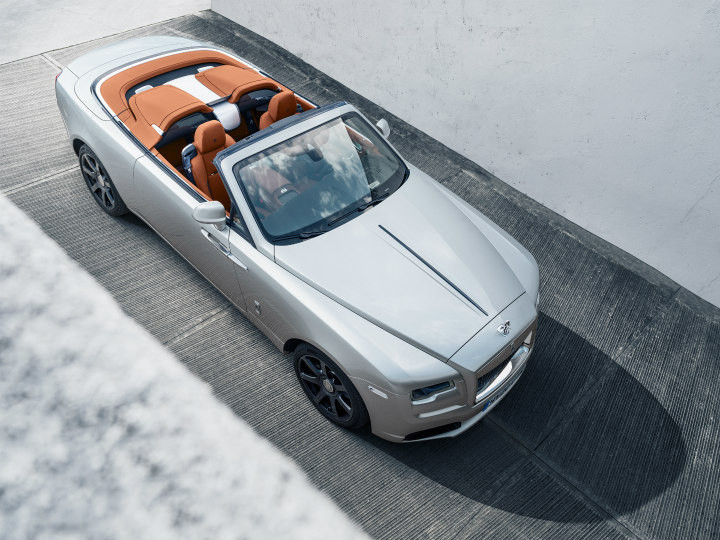 Back in March, Rolls-Royce gave us a sneak peek of the Dawn Silver Bullet in design sketches, and now, the carmaker has revealed first images of the open-top roadster tackling the roads of Lake Garda in Italy. Part of the carmaker’s ‘Collection Cars’ lineup, the Dawn Silver Bullet is essentially Rolls-Royce’s imagining of a two-seater open-top roadster. How did they achieve this you ask? Well, they took their only convertible, the four-seater Dawn, and adapted it into a two-seater roadster.

Since the Dawn Silver Bullet is based on the Dawn, the two are similar in design. But the two-seater open-top counterpart differs with a bespoke metallic Brewster Silver body shade that pays tribute to Rolls-Royce models of the past like the Silver Dawn, Silver King, Silver Silence and Silver Spectre. It also features subtle dark elements on the headlights, wheels and front bumper finish.

While the carmaker hasn’t completely revealed the interiors, there are clearly a host of changes. The main one being the tonneau covers for the rear seats that Rolls-Royce has termed ‘Aero Cowling’ and a vapour-blasted titanium finisher. It will also get an open-pore carbon-fibre insert and a quilted transmission tunnel cover inspired by leather jackets.

Technical details are yet to be revealed, but it should retain the Dawn’s 6.6-litre twin-turbo V12 engine. It makes 563PS of power and 820Nm of torque. All this gives the open-top sedan a 0-100kmph sprint time of five seconds and an electronically limited top speed of 250kmph.

The Rolls-Royce Dawn Silver Bullet will also be a rare gem with only 50 production units. We can expect a global launch later this year.