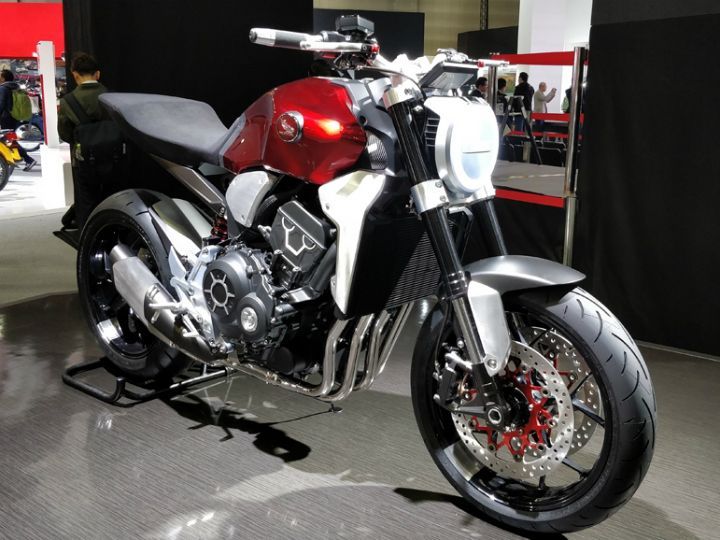 Honda’s Neo Sports Cafe concept that was unveiled at the Tokyo Motor Show is a retro take on a modern machine. As per Honda, it is a fusion of a sport naked with bare-bones cafe racer inspirations. Honda has now launched the bike at EICMA 2017 and announced that it will replace the CB1000R, as we had predicted.

Taking a look at the bike, one can figure that in appearance it's nothing like its predecessor. The new bike has a minimalist approach and looks sleek and elegant. It sports a round LED headlamp and a curvy LED taillamp along with an LCD display. The 16.2-litre capacity fuel tank flows seamlessly to form a flat and smooth tail. Further, the bike also features a beefy silencer with dual exhaust outlets.

We now know that the engine is based on the CB1000RR Fireblade. The 998cc, liquid-cooled, inline 4-cylinder has been reworked to churn out 145PS of power and 104Nm of torque, which is 20PS and 5Nm higher than the outgoing CB1000R. The motor provides a strong torque and better response in the mid-range for better performance on the street. The bike now also comes with throttle-by-wire as a feature. Speaking about the cycle parts, the chassis is connected to Showa's fully adjustable USD forks upfront and BRFC monoshock at the rear via a single-sided swingarm.

The bike also gets a wet multi-plate clutch with a 6-speed transmission. For braking, the bike employs 310mm double disc brakes at the front and a 256mm single disc at the back. Further, the bike has three riding modes and offers a mileage of 17.2 litres. Both the wheels are 17 inches in diameter and are cast in aluminium.
A CB 1000R+ version will come with heated grips, aluminium front and rear panels, flyscreen, single seat cowl, radiator grille with a CB1000R logo, and quickshifter as standard.

As European bike makers return to their classic models from the past for inspiration, the Japanese too seem to be following the same trend as the demand for such bikes have seen an upswing lately. Kawasaki blessed us with the Z900RS and now Honda too has unveiled its take on a modern classic motorcycle. Meanwhile, Suzuki has announced their intention to showcase a neo-retro motorcycle during EICMA. But another one is always a welcome addition and considering that the previous model was sold in India, we can expect the new one by next year.

For your convenience, we've summed up some of the best offerings EICMA has to offer this year. If you haven't read that yet, then click here!