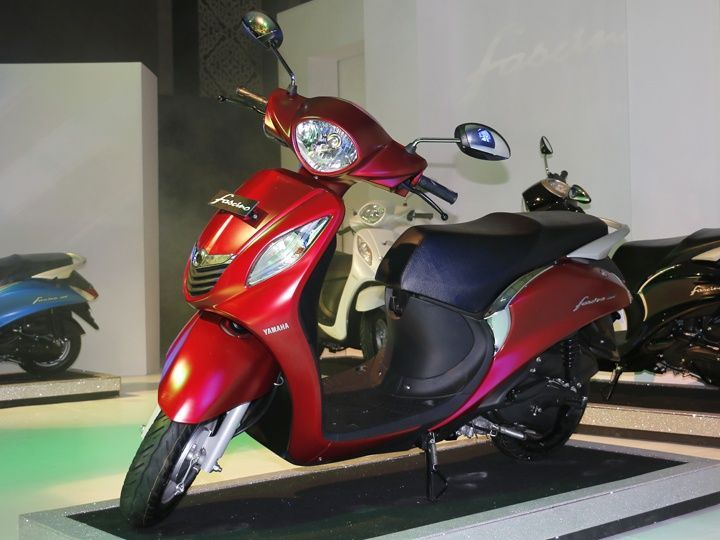 The Yamaha Fascino gets retro styled analogue instrument console that is pleasing on the eyes. The Yamaha Fascino also sports a small storage space near the key fob which is useful to store small water bottle, wallet, phone etc. The Yamaha Fascino also has the largest under seat storage at 21 litres which is a useful feature. According to Yamaha, the seats are 7mm thinner around the edges to allow the riders leg easily reach the tarmac. In terms of features there isn’t too much that the Fascino has on offer with respect to the Mahindra Gusto and the TVS Jupiter.

The Gusto being a Mahindra offering is loaded with features, some of which are a ‘first’ for scooters in our market. The biggest talking point about the Mahindra Gusto is the manual seat height adjustable option. The seat height can be raised or lowered manually by 35mm, which is beneficial to riders of different height. Another clever feature on the Gusto is the self-locking mechanism on the seat that maintains the seat in an upright position without the rider having to hold it manually. This feature is useful while accessing the under seat storage space and when refuelling the scooter. Below the instrument console is a spring loaded storage where rider can store various knickknacks like a mobile phone, wallet etc. The Mahindra Gusto also gets a remote flip key which is a first for any scooter in our country.

The highlight about the TVS Jupiter is its conveniently positioned external fuel filler cap, which save the rider from the tiring drill of getting off the scooter to access the under seat fuel filler cap. The TVS Jupiter also gets equipped with a pass light (first for any scooter in India) and an eco and power mode indicator to extract better fuel efficiency. Like the Mahindra Gusto, the TVS Jupiter has a kick start lever directed towards the rider which means unlike conventional scoters the rider can sit on the scooter and kick start it.

The Honda Activa has the least amount of features in comparison to the Mahindra Gusto and TVS Jupiter. The Honda Activa sports an anti-theft key shutter as seen on the TVS Jupiter and the useful Combi braking system. Another noticeable feature on the Honda Activa is the convenient lift-up independent cover (CLIC mechanism) that enables the rider to lift up the entire rear body cover easily to access the engine.

Contrary to popular belief the Fascino will not debut Yamaha's new 125cc motor but will come with the existing 113cc engine as in the rest of the Yamaha India portfolio. It develops 7.1PS of maximum power and 8.1Nm of peak torque. This makes the Yamaha Fascino the least powerful scooter among the lot.

The Mahindra Gusto and the TVS Jupiter employ large 12-inch dia wheels which aid in handling while the Yamaha Fascino and the Honda Activa run on smaller 10-inch wheels. In terms of wheelbase, the Activa has the shortest wheelbase at 1,238mm whereas the Yamaha Fascino comes second at 1,270mm while the Jupiter and Gusto are tied at 1,275mm.  The Mahindra Gusto has the highest ground clearance at 165mm followed by the Honda Activa at 153mm whereas the Jupiter is marginally behind at 150mm. Yamaha claims minimum ground clearance of 128mm for the Fascino.

Talking about weight, the Yamaha Fascino is the lightest of the lot as tips the scale at just 103kg followed by the TVS Jupiter at 108kg. The Honda Activa weighs in at 110kg while the Gusto is the heaviest as it tips the scale at 120kg. The Mahindra Gusto has the highest fuel tank capacity at 6 litre while the Fascino has 5.2 litre. The TVS Jupiter and Honda Activa have 5 and 5.3 litre respectively. The Yamaha Fascino has a under seat storage of 21 lire while the Honda Activa is at 18-litre followed by Jupiter at 17 litre and Mahindra haven’t revealed the storage space for the Gusto but we suspect it to be around 15 to 16 litre.

The Yamaha Fascino has been priced at Rs 52,500 which makes it the most expensive scooter of the lot with a sizeable margin. The Mahindra Gusto is offered in two variants – Dx and Vx. For this spec compare we have selected the top-spec Vx variant which has been priced at Rs 48,850. The TVS Jupiter retails for Rs 47,339. The Honda Activa carries a sticker price of Rs 49,634 (ex-showroom Delhi. In terms of fuel efficiency, the Yamaha Fascino leads the charge with a claimed figure of 66kmpl which is the highest for any scooter on sale currently.  Mahindra claims a mileage of 63kmpl for the Gusto. The TVS Jupiter follows it with a claimed fuel efficiency of 62kmpl while claims that the Activa will run 60km in a litre of petrol.