We do a specification comparison between the Yamaha Fascino which is touted as a premium scooter offering by Yamaha against 125cc scooters, the Honda Activa 125 and the Vespa VX 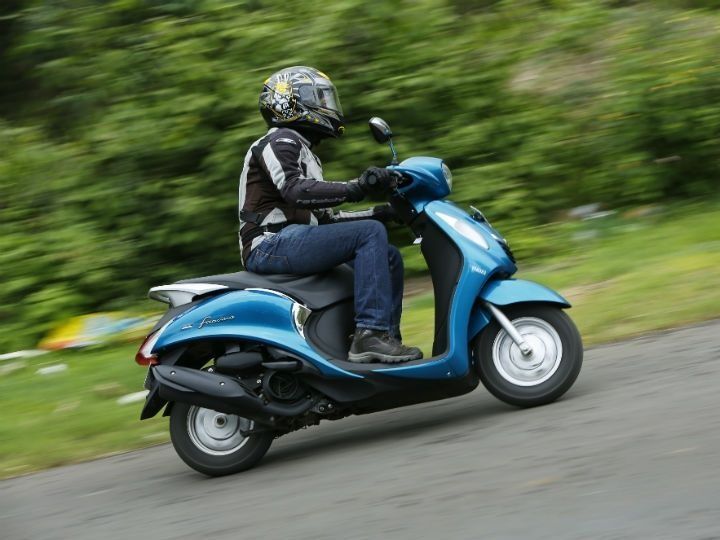 The Yamaha Fascino gets retro styled analogue instrument console finished in white that is pleasing on the eyes. It also sports a small cubby hole near the key fob which is useful to store small water bottle, wallet, phone etc. The Yamaha Fascino also has the largest under seat storage at 21 litres which is a useful feature. But despite the large space, it cannot swallow a full face helmet. According to Yamaha, the seats are 7mm thinner around the edges to allow the riders leg easily reach the tarmac. The Vespa VX also gets an analogue styled instrument cluster which is easy to read on the go. The Italian scooter also gets equipped with three-spoke alloy wheels and beige colours saddle. The Honda Activa 125 is the only scooter in its segment to offer a part-analogue-part-digital instrument console. Honda hasn’t divulged the under seat storage space but we assume it to be around 17 litres. The Honda Activa 125 gets equipped with anti-theft key shutter.

It was rumoured that the new Yamaha Fascino will debut the first 125cc motor for the Japanese two-wheeler manufacturer but that wasn’t to be. The Fascino is powered by a single-cylinder, air-cooled unit with 113cc displacement motor. The Yamaha mill churns out 7.1PS of maximum power and 8.1Nm of peak torque which makes it the least powerful among its rivals given the displacement handicap. The Vespa VX is powered by a 125cc motor and is equipped with three valves. The air-cooled motor produces 10PS of power and 10.6Nm of torque. The Honda Activa 125 is powered by a 125cc, single-cylinder motor pumping out 8.7PS and 10.1Nm of torque.

The Yamaha Fascino employs a telescopic front suspension and coil type hydraulic suspension at the rear. The Honda Activa 125 also ape similar suspension specifications which should result in decent ride quality. The Vespa VX uses a unique single side front suspension and hydraulic rear shock absorber. The Yamaha Fascino runs on 10-inch pressed steel rims while the Vespa and Honda offering employ alloy wheels. The Activa 125 has a large 12-inch front wheel which should endow it with better high speed stability.

The Yamaha Fascino runs on tube tyre while the Honda and Vespa offering employ tyres. Talking about braking, the Yamaha Fascino uses drum brake at front and rear. The Vespa VX and Activa 125 employ disc brake (optional on Activa 125) at front while the Honda scooter gets the benefit of combi braking system (CBS). The Yamaha scooter tips the scale at 103kg while its Japanese counterpart weighs in at 110kg while Vespa haven’t divulged the weight of the VX.

The Yamaha Fascino has been priced at Rs 52,500 which makes it the cheapest scooter among the lot. The standard variant of the Honda Activa 125 retails for Rs 55,689 while the disc brake variant has been priced at Rs 61,857. The Vespa VX carries a sticker price of Rs 72,000 making it the most expensive scooter among the trio. The Yamaha scooter leads he charge with respect to fuel efficiency as Yamaha claims an overall mileage of 66kmpl. The Honda active 125 returned as an overall figure of 49kmpl when we tested it last year. The Vespa VX is the least fuel efficient with an overall mileage of 44kmpl.