The Volvo V40 Cross Country has just been launched in India with an all-new petrol engine. We see how it stacks up to its competition, the Mercedes-Benz A-Class and the BMW 1 Series. 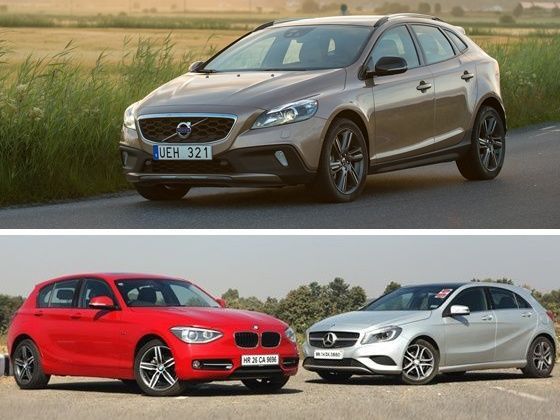 Volvo in India is an extremely low volume manufacturer that makes some great, yet under appreciated cars. With a whole range of cars to choose from, the V40 is Volvo’s entry level offering in India. Available till recently only with a diesel motor, the V40 is now also available with a feisty turbo petrol engine. We see how it stacks up against its biggest rivals, the Mercedes-Benz A-Class and the BMW 1 Series.

Although Volvo hasn’t revealed the fuel economy figures for the same, we expect them to be lower than the 15.5kmpl that the Mercedes-Benz manages and the 16.29kmpl that the BMW does. This might also be due to the heavier overall weight of the Volvo, an aspect that we will look at closer in our next section.

The Volvo V40 Cross Country, Mercedes-Benz A-Class and the BMW 1 Series are all sized very similarly. In fact, one of the reasons why the V40 trumps the Germans in terms of exterior dimensions is because of the add-on styling cues that are present on the car due to its cross hatch character. The Volvo is the longest car in the segment at 4370mm compared to the BMW(4324mm) and the Mercedes-Benz which measures in at 4292mm. Strangely though, the Volvo has the shortest wheelbase amongst the three at 2646mm compared to the A-Class at 2699mm and the 1 Series at 2690mm.

Mercedes-Benz, BMW and Volvo all offer their respective hatchbacks in India in only one variant. Where Mercedes-Benz and Volvo offer only a fully loaded version of the car, BMW takes a different and more basic approach to the topic. The BMW 1 Series petrol gets the most basic trim levels and comes with the most minimalistic levels of equipment excluding even electrically adjustable seats in favor of mechanically adjustable ones. On the other hand the A-Class comes well equipped with the likes of a panoramic roof, electrically adjustable seats and navigation equipped infotainment system.

The Volvo though is loaded to the gills with equipment making it an excellent value for money proposition. The Volvo gets equipment like a park assist, electrically adjustable seats and a large sunroof to compliment the extremely well crafted dashboard. The Volvo also gets a range of active and passive safety equipment like laser assisted automatic braking and city safety that offers an automated braking solution in case the driver does not respond to certain scenarios.

Price and value for money:

While all three cars offer an entry into the luxury car segment, some offer a very different approach. The BMW 1 series is the cheapest car of the lot priced at Rs 22.65 lakh (ex-showroom, Delhi) but of course comes with a very limited amount of interior gadgetry. It does offer white a good driving experience with its near 50-50 weight distribution and of course, rear wheel drive. The Volvo and the Mercedes are priced quite similarly at Rs 27 lakh and Rs 26.54 lakh respectively. Both also offer a very good range of equipment. That said, the Volvo also offers a superb engine with almost 60 per cent more power making it a really interesting alternative to the likes of the established Germans. Stay tuned to zigwheels.com for a detailed comparison report on the BMW 1 Series, Mercedes-Benz A-Class and the Volvo V40 Cross Country.