The new Tiger 800 XCx is an entertaining ride – and we’ve not had enough of it yet. The refined in-line triple, advanced electronics and superlative handling make the Tiger a very capable all-round bike. But is it as good an adventure bike? We get a Japanese V-Twin character to check if this Brit triple has what it takes to really go the distance – on tarmac and off it 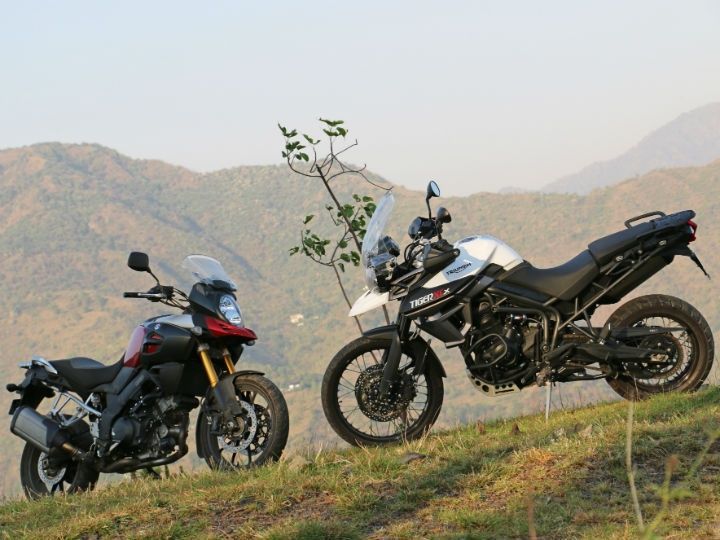 The new Tiger’s been an impressive bike since we first rode it, and for me, it ticks all the right boxes of a great all-round bike; the adventure credentials just come in as an add-on premium, even though that’s what it’s been marketed as. The 2015 Tiger 800 XCx is the top-of-the-line off-road focused range, with standard ABS, traction control as well as cruise control and the addition of Riding Modes to tackle any terrain.

Suzuki’s V-Strom has been around since 2002 when Suzuki first set foot into adventure-bike territory with the original V-Strom 1000. The latest 2014 V-Strom 1000 ABS is almost entirely new, with a bored out 996cc engine of its predecessor, new aluminium frame, new suspension, new design, refined ABS and three-position traction control system.

We top up the tanks and take these two bikes to the closest foothills of the Himalayas for a dose of adventure. Let the games begin…

As far as looks go, the Suzuki follows the adventure bike design to the ‘t’, and the front is imposing and has tremendous presence – with its tall stance and the ‘beaked’ styling that seems to be the norm for adventure bikes these days. Large wheels, wide seat, front windscreen, good ground clearance and a large fuel tank complete the adventure look.

The V-Strom’s stance and proportions make it intimidating, and unless you have a thing for adventure bikes, you won’t quite easily fall in love with the Strom’s looks. But give it a while, and you begin to  appreciate it, and it starts looking friendly even; well at least, it did to me.

Then there’s the ‘titanium’ powder coated frame, and engine protection guards sloping around the sides of the in-line triple. From the rear, the Tiger looks taller than the V-Strom, with a taller rear seat. Taller riders may not notice this, but for shorter riders, the lower rear seat of the V-Strom will be easier to swing a leg over.

As its name implies, the V-Strom is powered by a 1037cc, 90-degree V-twin engine, making 99PS of power and 103Nm of peak torque, rolling in at 4,000rpm. The torque is available at low and mid revs, making it a grunty machine in all gears. The throttle response however, catches you by surprise with its ‘jumpy’ nature. Some riders may like this ‘urgent’ throttle response but it’s not something which is smooth or proportionate to the revs.

The V-Strom’s engine is one of the more refined V-twin setups that I’ve ever ridden and with the low-end grunt, it makes it a very easy and capable tourer. Rapid overtaking on the highway is a breeze with just a simple rolling on the throttle. The gearbox slots easily and certainly, but compared to the slick ‘box of the Triumph, the Suzuki’s gearbox feels clunky, just so slightly. Although it’s capable of achieving high triple digit speeds, the powerband seems to lose its punch above 6,000rpm, giving a flat-ish feel at high revs.

The Tiger’s 800cc in-line triple engine, on the other hand, has got a completely different character. Slot it in Road mode and the Tiger behaves like a sedate commuter.  Road mode is quite suitable for use within the city or in traffic. Sixth gear is good for 50kmph riding in the city and high triple digit speeds as well on the highway. But switch the throttle map to Sport and the Tiger changes character. You will be tempted again and again to rev it to its limits and use all of the 94PS on tap.

The new Tiger’s gearbox uses parts from the Daytona 675R, and it shows. The gears slot in smoothly and precisely, and working that superb in-line triple through its paces and the gears is a very pleasurable experience indeed. It’s an engine that will keep almost every kind of rider happy; not too overwhelming and adequate entertaining performance.

Switching from the Tiger, the Suzuki feels slightly front heavy, but around town and out in the open road, the V-Strom is stable, agile and predictable. Give it a set of twisties and the Suzuki’s fully adjustable long-travel suspension, straight-backed ergonomics and Bridgestone dual-sport tyres help tackle corners with ease – fast, slow and even over rugged rocky terrain.

Suzuki’s ABS system works wonderfully well on tarmac, providing ample feedback on the lever and instills a level of confidence for high speed touring over long distances. The ABS however, cannot be switched off totally. Additional rider aids include the three-stage traction control with it being most intrusive at Level 2.

On dirt trails, the V-Strom performed much better than we expected. The suspension gulped down bumps on dirt roads quite easily while it remained steady and stable, even through gravelly corners in the dirt.

The Tiger does everything the Suzuki does and then some more. On the road, the XCx tackles minor imperfections with ease – thanks to the superb chassis and the excellent WP suspension. Bank it into a corner, and the Triumph retains its line, almost like a sportbike, and undulations on our road conditions, even mid corner, are dismissed with a shrug of the suspension.

The chassis makes flicking the Tiger around seem easy, and the advanced electronics offer a lot of different settings, both for normal on-road use and for dirt-focussed throttle control and ABS/traction control settings.

The Tiger’s versatility and excellent all-round capability almost made this comparison a one-sided contest. Switching over to the V-Strom is ‘different’. Firstly, the riding position is more upright than the Tiger’s and the Suzuki seems more suited for long hours on the saddle.

Compared to the laid back, quiet confidence of the V-Strom, the Tiger is a hooligan! Yes, it can do the daily commute with well-mannered mid range refinement, but the nature of that engine will tempt you to redline through the gears.

But it’s not easy to pick a clear winner here, since the Tiger’s price and equipment makes it a very attractive package. At Rs 12.7 lakh (ex-showroom Delhi), the Tiger is over two lakh cheaper than the V-Strom at Rs 14.95 lakh (ex-showroom). And you also get a more advanced electronics package on the Tiger as well as standard sump and hand guards. For the V-Strom, those come as additional aftermarket accessories and will further add to that price tag. All in all, the V-Strom just about loses that edge to the Tiger.