Maruti Suzuki will be launching the Vitara Brezza tomorrow marking its entrance in the compact SUV segment. We have compared the Vitara Brezza with the Mahindra TUV300 and Ford EcoSport to give you a detailed report 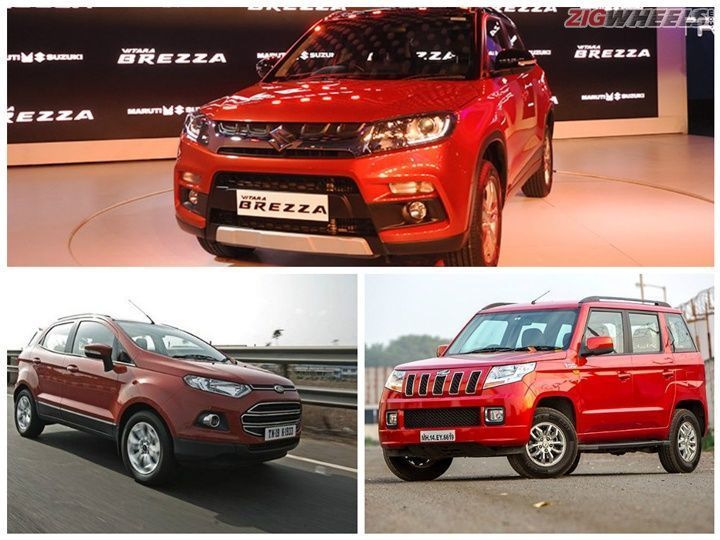 Compact SUVs are currently the most trending vehicles in the Indian car market. This segment gives the buyers the functionality of a hatchback and the capability of an SUV making it an attractive package. Maruti Suzuki will join the compact SUV bandwagon with the Vitara Brezza which is scheduled for its big launch tomorrow. The Vitara Brezza has already caught the eye of many aspiring buyers, let’s see how the Maruti Suzuki fairs against the likes of the Ford EcoSport and Mahindra TUV300 in a specification comparison.

The Ford EcoSport comes in both engine variants, two petrol and one diesel to be precise. For the petrol variants, the EcoSport gets the 1.5-litre engine which produces 112PS of power with 140Nm of torque. The smaller 1.0-litre EcoBoost engine makes 125PS of power and 170Nm of max torque. The diesel powered variant of the EcoSport borrows its engine from the Fiesta which registers 90PS of max power and 204Nm of peak torque.

Coming to the Mahindra, the TUV300 is equipped with the 1.5-litre mHawk80 turbocharged diesel engine which produces 85PS of power and 230Nm of torque. The Mahindra TUV300 has a longitudinally mounted engine as compared to a transverse setup in the other two compact SUVs.

Maruti Suzuki will be powering the Vitara Brezza with the trusted DDiS 200 diesel engine which has performed well in other products like the Ertiga, Ciaz and the S-Cross. The engine is the same 1.3-litre four-cylinder DDiS diesel engine which is being sourced from Fiat. This engine belts out 90PS of power at 4,000rpm and 200Nm of torque at 1,750rpm and further drives the front wheels via a 5-speed gearbox. The Vitara Brezza will be initially launched only with the diesel engine option for the Indian market.

Although the output figures of the Brezza are not the highest on paper, expect it to be one of the best performer amongst its competition mainly due to its well-designed gearbox.

Apart from the long list of features provided for the top-end variants of the three vehicles, we have shortlisted some for you for their exclusivity. The Maruti Suzuki Vitara Brezza gets dual airbags, projector styled headlamps with an automatic function, scuff plates and a touchscreen infotainment system. The Ford EcoSport gets six airbags, button start feature, keyless entry, and parking sensors for easy maneuverability though tight spots. The TUV300 is the only compact SUV to feature a 5+2 seating configuration and cornering lights. The Vitara Brezza and EcoSport get daytime running lights which are missed on the TUV300. Also, Maruti Suzuki will be offering the Vitara Brezza with a dual-tone colour approach which is unique for the compact SUV. Spare wheel for the Vitara Brezza is located under the rear luggage space allowing easier access. The TUV300 and EcoSport however have the spare wheel mounted vertically on the tail gate which can possess a difficulty to some owners. The Ford EcoSport and the Mahindra TUV300 are both offered with an automatic variant while Maruti Suzuki will mostly also provide the same soon after the launch.

The highly fuel efficient 1.3-litre DDiS mil powering the Vitara Brezza compact SUV will return a mileage of 24.3kmpl as claimed by the company.