We take five of India’s best offerings in the 110-cc segment to settle the big debate once and for all: Which is the one worth putting down your moolah for? 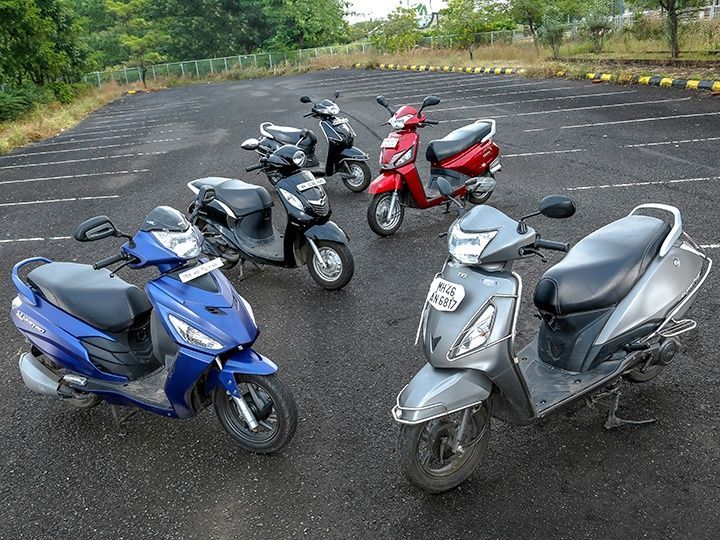 Scooters have always been relegated to the sidelines, the glitz and glamour of the two-wheeled world largely dominated by their motorcycle counterparts. Not that it diminishes their importance in the commuting milieu in the slightest. On the contrary, scooters are unparalleled for their convenience and ease of use. The absence of gears, plush seats, upright ergonomics, unstressed engine, all mean that you can ride them day in and day out.

I’ll be honest, though, I haven’t been that big of a fan of scooters. Despite their proven ease of use, I – and I guess many other bikers like me – have always preferred the power and thrill afforded by motorcycles. Not to mention, there’s something, err... masculine, in a primal way, about the feeling of having something powerful and throbbing between your legs.

That said, we’ve a task at hand: to find out which of these five scooters are worthy of the coveted ZigWheels Best in Class crown, so let’s get to it.

About two decades ago, the Indian market saw an unprecedented upheaval that completely changed the way we look at scooters. Since then, it is as if the scooter market in India has hit a certain plateau up to now. All the scooters in this shootout are quite birds of the same feather, with few standout features and little to differentiate them from the rest of the pack.

Design wise, the only scooter that stands out from this pack is the Yamaha Fascino. With its flowy lines, low stance, and chrome accents, the Fascino tilts more towards Italian scooters like Vespas than our own. However, in this case, being visually different doesn’t mean it is the most attractive scooter. That accolade, in our opinion, belongs to the Maestro Edge, which, by virtue of its matte blue paint scheme and sharp creases along its bodywork, looks the most modern without being overly feminine like the Fascino.

It’s the same story on the features front. With the exception of the outside-mounted fuel caps on the Jupiter and Maestro Edge, the remote alarm on the Gusto, and the combined-braking-systems on the Maestro Edge and Activa 3G, they are all loaded with pretty much the same set of features. The Jupiter also has a nifty mobile charger slot as part of its options list, and is one of the two scooters here to get a pass light switch, along with the Maestro Edge.  The latter, meanwhile, is the only one in this bunch to feature a semi-digital console.

As with the feature list, these five scooters are also pretty evenly matched in the performance department. With 8.3 PS of peak power, the Maestro Edge leads the pack in outright power, followed by the Activa 3G and the Gusto with 8.1 PS. Then comes the Jupiter with 7.8PS of peak power, while the Fascino brings up the rear with 7PS.

But performance is never always about how much power a vehicle makes, and that is the case here. The difference between the power and torque output of these machines are so miniscule that they’re hard to make out even when ridden back to back, as we did. Rather, it is more about the seat-of-the-pants feeling, backed up by hard numbers.

It might be the oldest of the lot, but the Honda Activa 3G can still boast of having the most refined engine in its class. The powertrain is a peerless act, smooth and creamy, and it was also able to attain the highest top speed here, aided in some measure by my small (aerodynamic, ahem!) stature. The Jupiter comes in at a close second; a solid offering from TVS that ticks all the right performance boxes.

But what really surprised us was the weakling of the bunch on paper, the Fascino, with its free-revving engine and 108 kg kerb weight, the lightest in this shootout. Yamaha’s “Revs Your Heart” ethos seems to have seeped even into their scooters and the Fascino was able to keep up with the Jupiter in the performance stakes.

As we said, outright power doesn’t always translate into commendable performance and that is what we found with the Maestro Edge. The newly developed engine was a disappointment, not very refined and sprightly on the straight and narrow.

Tipping the scales at 120 kilos, the Mahindra Gusto weighs a good 12 kilos more than the Maestro Edge, the second heaviest in this shootout, and that reflects in its outright performance, although it has a strong mid-range that allows you to hold speeds of around 60-70kmph with ease. Moving higher than that it felt sluggish, and wasn’t able to keep up with the other machines as we raced down an empty Palm Beach Road in the wee hours of the morning to catch up with our photographer’s Maruti Swift on the day of our photoshoot.

No matter how efficiently you engineer them, scooters aren’t exactly corner-carvers like their motorcycle counterparts. And they aren’t meant to. Their plush seats, small tyres, short wheelbases and archaic drum brakes are meant to ferry you from point A to B in the most comfortable and unstressed manner possible. With that in perspective, all of these machines deliver and deliver well.

Leading the pack in these departments were the Fascino and the Jupiter. Like we said, Yamaha’s lessons at the racetrack seem to have translated rather well to the Fascino. It rides the lowest, which helps keep the centre of gravity down, and tipping it into corners and maintaining a line is a breeze. The Jupiter, a larger machine, is as agile as the Fascino, but it scores major brownie points on top of that thanks to its immensely comfortable seat and forgiving ride quality that are as cosseting on short office commutes as on day-long trips.

The Activa and the Maestro Edge are pretty evenly matched on the ride and handling front, with both scooters providing a comfortable ride while being a tad nervous in corners. They’re evenly matched in the braking department too, with their Honda-developed combined-braking system lending a touch of poise and stability and not letting the rear wheel lock up under hard braking on less than ideal road surfaces.

Is there anything good in the world that doesn’t come with a catch? Probably nothing, isn’t it? In this case, the downside of the convenience of variomatic transmission is that they aren’t exactly as fuel efficient as the size their engines would have you believe.

All the scooters here save for the Activa deliver more or less the same fuel efficiency, which in anywhere between 50 kmpl to 53kmpl. The Activa, meanwhile, manages to eke out approximately 56 km from every litre of fuel on our test, 70 percent of which was conducted in city traffic and the rest on the highways.

Which brings us to the verdict. And, in a price sensitive market like India, that largely boils down to the price tag as much as it does to features, design, mileage, and performance. Tallying up our collective points, the TVS Jupiter beat the Yamaha Fascino and the Honda Activa 3G by a hair’s breadth, while the Maestro Edge and Gusto weren’t that far behind.

But then, when you factor in the prices, it is the TVS Jupiter that comes up trumps in this closest of races with its reasonable price tag of Rs 47,989. The Honda Activa 3G, with a sticker price of 49,517, is the first runner up, helped also by its extensive dealer network and Honda’s brand value that should see it in good stead should the time come to sell. The second runner-up is the Yamaha Fascino, still an exemplary machine but let down slightly by its price tag of Rs 53,000, the most expensive in this group.

They are followed by the Hero MotoCorp Maestro Edge, priced at Rs 49,500, with the Mahindra Gusto bringing up the rear at Rs 44,850 (all ex-showroom, Delhi), the least expensive of the five machines we have here.

This has been one of the closest flights we’ve seen yet, but the TVS Jupiter has managed to cinch the crown thanks to it excelling at everything we could throw at it. The king in outright sales has been dethroned. Long live the new king.