We pit the Apache RTR 200 Fi against its carbureted twin to find out if the addition of a fuel-injection system has truly made a world of a difference. 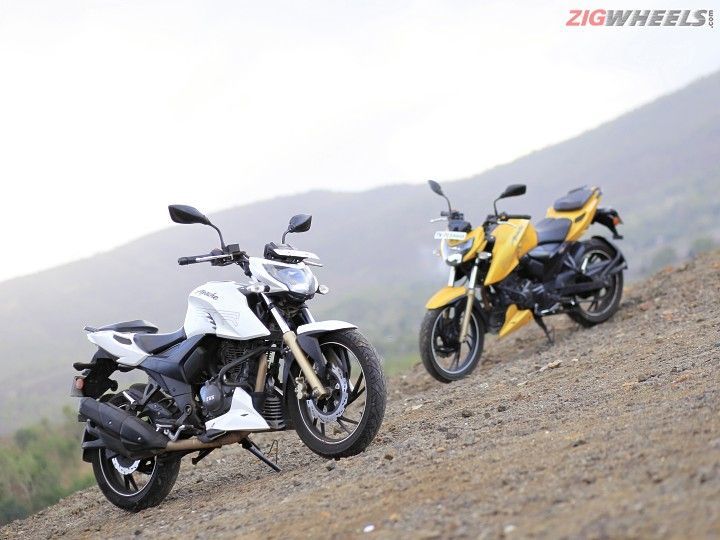 After much anticipation and waiting, the fuel-injected variant of the TVS Apache RTR 200 finally arrived and we decided to pit it against its carburetted sibling, to find out just how different it is and whether the Fi is worth putting down the additional Rs 7,700 or not.

On the styling front, both the RTRs look identical, except for the Fi badge, which makes its way on the belly pan of the fuel-injected variant. The bikes flaunt the same design language that is typical of TVS’ Apache series, only sharper, meaner and more focused. These characteristics are also visible from the distinctive looking front, which chucks the windscreen and semi-digital dashboard of the 180 for a white backlit all-digital instrument console that also comes loaded with oodles of information like a lap timer, acceleration timer, fastest speed recorded, service indicator and gear indicator.

The headlight surrounded by boomerang-shaped DRLs looks edgy, but unfortunately, the beam from this headlight feels a bit inadequate in the dark. The switchgear is well positioned on the clip-on handlebars and feels rich in terms of quality, while the easy to reach, buffed alloy clutch and brake levers amplify the sporty nature of the design. The company has also done well to focus on small design highlights on the sharp, aggressive looking fuel tank.

These details include the offset fuel lid and the black stripe that runs across the length of the tank. Overall, the RTRs, with their attention to detail and rich feeling matte finish metallic paint jobs, reek of quality and finish that can be termed at par with the best in the segment.

The only downside being, the double barrel exhaust, which doesn’t really gel with the overall mass forward design aesthetics of the bike as it looks too bulky and overloaded, considering the overall minimalistic design cues of the bikes.

Both the bikes get a four-stroke, air-cooled, single-cylinder, 197.75cc, 4-valve engine. What sets them apart, though, is the fueling, which plays a key role in how these two perform in real life conditions. The RTR Fi generates 1PS more power i.e 21PS at 8,500rpm, in comparison to the carb version that produces 20.05PS at 8,500rpm, whereas peak torque of 18.1Nm is the same, generated at 7,000rpm. But the actual performance numbers tell a very different story.

With both the RTRs, thanks to a shorter first gear, you don’t need to rev the bikes hard to launch them off the line. But the carburetted bike has much better bottom-end torque delivery and it manages to accelerate from zero to 60kmph in 4.02 seconds. The Fi, on the other hand, has a much wider torque spread across the rev band, so while it feels a lot more linear to ride, its zero to 60kmph time is actually slower, at 4.67 seconds.

The roll-on times on the carb version are also better due to the stronger low- and mid-range grunt. As a result, 30-70kmph in 3rd gear is dished out in 5.59 seconds and 40-80kmph in 4th gear takes 7.71 seconds. The more linear power delivery on the Fi can also be felt during roll-on tests, as 30-70kmph takes 5.62 seconds and 40-80kmph in 4th gear is done in 7.90 seconds. From the saddle though, the RTR’s carb version, which feels more responsive for city commuting, doesn’t feel as refined as the Fi version. Whether at low speeds or high, the fuel-injected engine managed to keep vibrations to a minimum.

The clip-ons on the Apache RTR 200 are positioned close to the rider, making for a more relaxed reach. The footpegs too aren’t extremely rear set and add to the commuter-oriented ergonomic. However, the raised footpegs might feel a little uncomfortable for taller riders as the tank’s recesses fail to offer enough room to move around. The split seats, too, feel soft and are more suited for shorter commutes rather than long distances on the highway. Suspension duties on the RTR are managed by telescopic forks up front and a 5-stage adjustable hydraulic monoshock at the rear. The overall suspension setup manages to tackle rough road sections quite well. But over large bumps, it feels a little on the softer side, resulting in some vertical movement that takes a bit of time to settle down. But more than the rider, this affects rear seat comfort, which can lead to the pillion rider bouncing about a bit if you happen to ride quickly through a big pothole.

The RTRs get a single petal disc brake up front and rear, along with Pirelli tyres (standard on Fi and optional on the carb). The brakes do feel powerful and progressive, however, there’s a distinct lack of consistent feedback under hard braking. Braking distances are quite respectable though, with both the bikes coming to a halt from 60kmph in 21.20 metres.

When it comes to taking the two out for some serious corner carving, the RTRs do take some getting used to. The sharp steering geometry means that they turn in very quickly, almost to the point of feeling twitchy. Even though you’re not sitting too high off the ground, and there’s nothing visually about the RTR 200 that seems to suggest so, it feels like a top-heavy motorcycle. That said, it’s a massive improvement over the something like the RTR 180, and offers plenty of mid-corner stability thanks to its grippy Pirelli tyres.

Both the TVS Apache RTR 200s – Fi and Carb versions – are very similar to each other when it comes to riding dynamics, and even though both are suited to handle city duties a lot better than gulping down miles, they do have a very different set of skills when it comes to performance and fuel efficiency.

Very surprisingly, if it’s performance that you seek, the carburetted version is the one we’d recommend. It’s way more punchy and around the city, it will keep you thoroughly entertained in the way it can take off from signals. However, the Fi version claws back its advantage in top speed, refinement and fuel efficiency. It’s more comfortable sitting at higher speeds and has lower NVH levels while doing so. So, by that standard, for those with the propensity to go long distance riding, the Fi is a natural choice.

Priced at Rs 98,205 (ex-showroom Delhi) for the Pirelli tyre version (Rs 5,000 cheaper for TVS tyres), the carburetted TVS Apache RTR 200 offers a lot of value for someone looking for a fun-to-ride, everyday motorcycle. For fuel injection, you’ll have to shell out Rs 1,05,905 (ex-showroom Delhi), which is by no means a small amount. While both bikes are equally matched in many aspects, there is a case to be made about the refinement levels and efficiency of the Fi bike. However, if we had put our own money down, we’d definitely gravitate towards the carburetted version of the Apache RTR 200.

You Can Now Look As Sporty As Your Motorcycle...