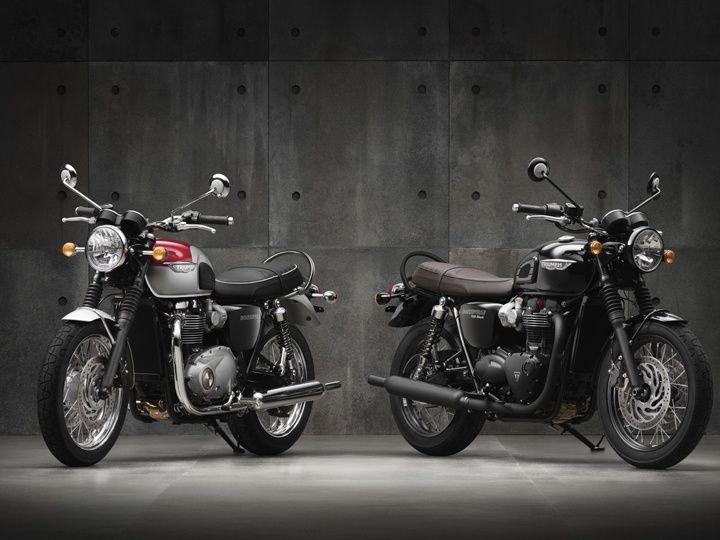 The round headlamp, twin-pod instrument console, large tank and flat seats hark back to the old-school Bonneville design language and despite being more than five decade old; the styling of the motorcycle still has the correct elements to make it a visually attractive and pleasing motorcycle. Other design elements on the 2015 Triumph Bonneville includes wire-spoke wheels, fork gaiters, peashooter style exhausts that are raked out, chrome coated tube grab rail and the simple tail lamp unit.

The design details that indicate the new Triumph Bonneville T120 is a modern machine is the radiator cover as opposed to the air-cooled motors of the yore, LED tail lamp and DRL’S. As the name suggests, the Triumph Bonneville T12O Black gets a rich black paint shade and is visually almost similar to the stock Triumph Bonneville T120. Few standout visual details include dark brown seat and all-black detailing on the rims, grab rail exhaust and engine.

The biggest improvement on the new Triumph Bonneville T120 range is in the powerplant as the engineers have focussed their attention to make the motorcycle more powerful and faster than its predecessor. Powering the 2015 Triumph Bonneville T120 is a 1,200cc, parallel-twin motor which has been liquid-cooled for better heat dissipation. Triumph hasn’t divulged the exact power figures yet but claims that the new engine is almost 54 per cent more powerful than the outgoing model which is a huge leap in terms of power output.

The high torque motor does great justice to its nomenclature as it churns out 105Nm of peak torque at just 3,100rpm which means the motorcycle will have good low-end performance and will be a delight to ride on the mountain twisties. The new mill also gets the benefit of Triumph’s next generation ride-by-wire fuel-injection and engine management system with better and crisper throttle response. The motor is mated to a 6-speed manual transmission as opposed to the 5-speed gearbox on the older model. Triumph claims the liquid-cooling system has allowed them to meet the stringent emission norms and has also improved fuel efficiency of the motorcycle.

Special attention has been given on the visual presence of the powerplant as the engine profile has been made to look similar to the 60's Bonneville bikes. It sports brushed aluminium engine covers, bronze detailing on the T120, and black engine covers with machined aluminium detailing on the T120 Black. The exhaust note has also been specifically tuned to please the purists with an unmistakable parallel-twin exhaust note that the Triumph Bonneville’s are renowned for.

The 2015 Triumph Bonneville T120 might look very much similar to its predecessor and could be passed off as a classic motorcycle but under the old-school skin lays a ton of modern features that should satisfy the demands of the current generation bikers. The motorcycle features a traction control system that can be disengaged by the rider, switchable ABS system, Ride-by-Wire technology, engine immobiliser and slip assist clutch.

The new Triumph Bonneville T120 feature an all-new chassis and suspension set-up. The motorcycle employs a flat and wide handle bar along with centre-set footpegs. This should result in an upright and comfortable riding posture. The large seat has been specifically designed to make the Bonneville T120 pillion friendly and it also features a grab rail. The heated grips make riding the motorcycle on chilly weather conditions more comfortable and will be appreciated by motorcyclists residing in the cooler parts of our country.

Suspension duties are handled by telescopic front forks and twin-shock unit at the back. According to Triumph the suspension has been tuned to offer good ride quality with better travel than the predecessor. The new chassis has been designed for neutrality, agility and stability, which means the motorcycle, is a relaxed soul around corners and if you’re planning to go corner hunting, the Triumph Bonneville T120 isn’t the bike for you. Braking is done by disc brakes at front and rear while switchable ABS is standard.

The addition of features and mechanical updates mean that the Triumph Bonneville T120 duo would be dearer than its predecessor. We expect the 2015 Triumph Bonneville T120 to carry a sticker price of around Rs 10 lakh ex-showroom and it will be brought to the Indian market via the CKD route. The new Bonneville T120 is expected to make its Indian debut at the 2016 Auto Expo in Delhi early next year with an official launch around by mid-2016.

The Triumph Bonneville T120 duo really doesn’t have any competition in the Indian two-wheeler market as the bikes fall under the neo-retro motorcycle range. In terms of pricing, the litre-class street bikes from the Japanese manufacturers are its closest rival but then Triumph has its Speed Triple to rival them. In essence, the Triumph Bonneville T120 pair is motorcycles for mature riders who like its old-school styling, modern list of features and prefer to enjoy motorcycling at a leisurely pace soaking in the scenery.