With over a decade of legacy, has the Avenger started to show its age or can it still fight the Intruder? 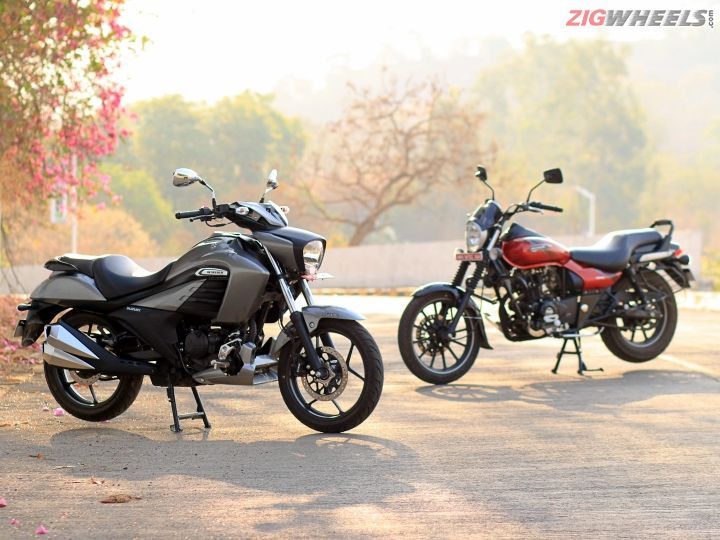 If you are looking to buy a cruiser for the daily grind, the Bajaj Avenger is probably the first bike which comes to mind. Rightfully so - it has been around since 2005 and is the most affordable small-capacity cruiser you can get in the country. And, in the recent update, Bajaj have given it a few cosmetic changed, while bumping up the entry-level Avenger from 150cc to 180cc.

But now, there is something else in the market which is intruding in its space - the Suzuki Intruder. It gets more hardware, costs Rs 15,000 more and looks - well, let’s just say it is attention-grabbing. To make things even better, it is based on the underpinnings of the Gixxer, which we absolutely adore.

Now, here’s the question - can the Intruder justify its price tag over the Bajaj Avenger Street 180, or is it asking for a bit too much? And to answer that question, we will be answering a few others like...

Which one is more comfortable?

Though they are ‘cruisers,’ their primary role is to be a city companion. And so the answer to that question would depend on how tall you are. The Intruder has a wider seat than the Avenger and hence feels more plush to spend some time on. But that also means it is harder (compared to the Avenger) to get your feet flat on the ground.

Luckily though, the Intruder’s handlebars are higher up and closer to you, which makes for a more comfortable riding position. Dial in the fact that the Intruder has a lighter steering and it becomes the easier bike to manoeuvre in the city and take u-turns on.

The Avenger, on the other hand, has the narrower seat and lower seat height. This makes it easier to get your feet firmly on the ground when you need to. And in traffic, the more centrally set footpegs (compared to the Intruder’s forward-set pegs) makes quickly transitioning your feet from peg to ground that much more convenient. So if you are 5’5 or shorter the Avenger would be a better option.

But, which one is nicer to ride?

The Avenger wins the capacity battle with a larger 178.6cc motor. It makes 15.5PS of power, which is more than the Intruder’s 14.8PS. But, even with the smaller 154.9cc motor, the Intruder makes slightly more torque (14Nm) than the Bajaj (13.7Nm). And both come with to a 5-speed transmission.

What's interesting here is that both these bikes get engines from their sportier siblings, but the Avenger 180’s motor has been detuned to feel more relaxed and deliver a more cruiser-like character in power delivery. Add to this short gearing, and you end up with a very tractable setup. But the gearbox sometimes doesn't slot properly and throws tantrums to get into neutral.

That said, you can keep the Avenger in 4th and 5th gear in the city and it will amble along without any fuss. Open the throttle and it accelerates swiftly. Even from a standstill, the Avenger is quicker to both 60kmph and 100kmph than the Intruder. It takes 5.62 seconds for it to reach 60kmph while triple digits come up in 16.39 seconds. It takes the Intruder 5.73 seconds to get to 60kmph and 17.93 seconds to reach 100kmph.

On the other hand, the Intruder’s engine has the same tune as the Gixxer and it retains its sportier characteristics. The refinement levels here are impressive from the word go and there are barely any vibrations throughout the rev range

The gearbox is slick shifting, but thanks to taller gearing, you are left changing gears more often in the city as compared the Avenger. Also, the power is not as effortless and you have to open the throttle more for it to kick in. But once that happens, the bike is quick to respond and feels sporty, and all this without any vibrations! The Intruder’s stronger mid-range shows in the figures as well. While it takes 6.12 seconds to get from 30-70kmph in 3rd gear and 8.52 seconds from 40-80kmph in 4th, the Avenger manages the same in 6.51 seconds and 8.85 seconds, respectively.

Which one is cheaper to run?

What if you encounter a bad patch of road?

In the 2018 update, Bajaj has increased the Avenger’s rear suspension travel by 10mm to offer a plusher ride. The Intruder uses a monoshock from the Gixxer at the rear, which feels a bit too stiff for a cruiser.

While both of these setups are on the stiffer side the Avenger does a better job of filtering out the harshness of bumps and potholes. The only issue is that it tends to become a bit bouncy over broken roads, especially with a pillion.

The Intruder translates more of the surface harshness to the rider, especially on sharper undulations, sometimes quite hard too. But, it remains well composed with a pillion onboard.

Speaking of the pillion, the wider seat of the Intruder does a better job of keeping him or her comfortable. But the bigger grab rail and longer seat of the Avenger will be a boon in supporting their backs on longer journeys.

What about the occasional wanderlust?

In this case the Intruder wins hands down. Not only does it feel more relaxed close to triple digit speeds on the highway, its stiffer monoshock here keeps the bike more planted too. And the sportier underpinnings lets it take on hill roads without breaking a sweat. It feels confident to turn in and maintains its line through corners easily. The lighter front here makes for quicker steering too, and the Intruder is quite a bit of fun to ride, even when pushed hard.

The Avenger begins to feel stressed over 80kmph, with vibrations creeping in from the footpegs, handlebars and even the fuel tank. So when doing long-distance highway runs, it’s best to keep speeds a bit on the lower side for a more relaxed riding experience. And while it doesn’t match up to the Intruder in this department, it is a fair bit of fun on the hills too, provided you ride in a more relaxed, cruiser-like manner.

Which one packs more equipment?

Again, the Intruder. It comes with a fully digital instrument cluster, borrowed from the Gixxer, which gets a large speedometer display, tachometer, gear indicator, clock and two tripmeters. Additionally, it also gets tinted rear-view mirrors, better switchgear and an LED taillight.

The Avenger only gets a basic speedometer with a single tripmeter and odometer packaged in a classic analog pod. The fuel gauge and the tell tale lights are on the tank, which are a little hard to read in the day.

Not to forget, the Intruder also gets a front and rear disc brake setup (266mm/220mm) along with single-channel ABS thrown in as standard for good measure. The Avenger, on the other hand, gets just a front disc (260mm) and no ABS at all. But here is the funny part. Though on paper, the Avenger is inferior to the Intruder in the braking department, it ends up feeling more confident in braking, coming to a halt from 80kmph in a shorter distance (32.66 metres). The Intruder brakes well enough, but feels squirrely under very hard braking, doing the 80 to 0 stint in 38.38 metres. That said, ABS does give the Intruder an edge when braking on loose surfaces.

Finally, which one turns more heads?

Yet again, the Intruder. But only this time, it might not be a positive. There are no two ways about it - the design of the Intruder is polarizing. You will either love it or hate it, and there is very little chance of it growing on you over time. The chunky front fascia, bulbous fuel tank and the fat tail section are all plastic and make for a rather overgrown motorcycle. And the exhaust, in our opinion, is just a little too much. But hey, it’s subjective and you might love it.

But what's not subjective is that some of these plastics, of which there are a lot, had already started to rattle on our test bike. And we fear the same might happen to the other plastic parts as well. That said, the finish and paint levels are top notch. The glitter in the paint is even present in the matte black plastics, which looks all the more impressive.

The Bajaj, on the other hand, is neat and simple. It has been carrying over the same design language for quite some time. And even though it has started to show its age, the Avenger still appeals to a much larger audience because of its more cruiser-like appeal.

Which one do I buy?

Though the Intruder offers more features, buying the Avenger at Rs 85,498 (ex-showroom, Delhi) is not really a compromise. It is a very basic motorcycle that does its job well enough and works rather well in the urban environment.

What the Intruder offers is versatility and a certain premiumness, though its looks are still hit or miss. It takes on the city well and is actually better suited for the open road. To top it off, it’s a joy on winding ghat roads as well. It even offers better equipment levels. Honestly, in our opinion, a premium of about Rs 7000 to Rs 8000 would have been easily justifiable.

As it stands, the Intruder costs Rs 99,995 (ex-showroom, Delhi). If you like the way it looks, and don’t mind paying the extra Rs 14,497, the Suzuki is definitely the way to go. It is the better bike in many ways. But the Bajaj’s value-for-money game is just too strong. And that makes the Avenger our choice of urban cruiser.