A facelift, some new features and a mild detune - is Suzuki on the right path in its quest to outdo the current segment leader from TVS? 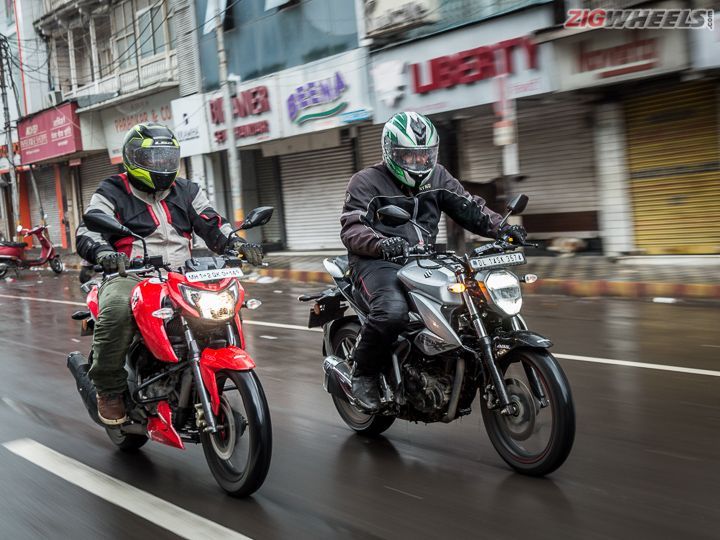 The evolution of the 150cc segment has been intense. Apart from the fact that it’s inflated to the 160cc mark now, a lot has changed about the motorcycles we, not long ago, considered sports bikes. The bigger evolution, though, has happened within you and I, the Indian motorcyclist. Today, the mention of a 160cc motorcycle barely gets even the most indiscriminate enthusiast excited. And in an interesting development, it’s the been-there-done-that commuters, having progressed from 100s to 110s to 125s and even bare-basic 150s, who, in fact, consider 160s as an ideal upgrade to commute on. It is in this convoluted class that the TVS Apache RTR 160 4V has raised the bar seriously high. It’s no wonder the Yamaha FZ V3 tried, but failed, to make a big impression on the RTR when we compared them recently, and now Suzuki wants to have a go, with the updated Gixxer.

Styling and Equipment
That the Apache is largely identical to the RTR 200 4V is no news, so let’s not ponder over the commonalities. What is worthy of repeat mention is how well finished and neatly put together it is. The RTR 160 seriously marks TVS’ evolution as a maker of premium motorcycles and the attention to detail shows in not only the panel gaps, but even in something as elementary as the handlebar clamp, which has been neatly designed with Allen bolts holding the assembly together. Equipment levels are also high on the RTR, with a fully-digital dash (a bit obsessively packed - do you really need a lap timer on this sort of bike?), a petal disc up front, a Showa-engineered telescopic fork (some badging would be nice, no?), an LED tail lamp and other design niceties such as an underbelly cowl and a chiseled grab rail. Our test bike is a carburetted, non-ABS variant, but visually, this Apache is exactly like the rest of the 160 4V range.

The Gixxer is clearly a one-up attempt on the Apache. The already trendy motorcycle now gets an LED headlight and tail light, and heavily revised bodywork which spares not a single panel. The result is a motorcycle that is stylish as ever and, visually, appears to be larger than the Apache. That headlight unit is polarising and definitely doesn’t gel naturally with the rest of the Gixxer’s design, but it’s a cool-looking bike, we can unanimously agree. On the equipment front, the one-upmanship continues. The Gixxer retains its crisper, cleaner digital instrument cluster and gets a gear position indicator as well. The telescopic fork, at 41mm, is fatter than on the Apache and while the Gixxer doesn’t get a petal disc, it does get wider tyres at either end, with the rear one being a radial. Single-channel ABS is standard on both, as is mandated by regulations. In addition to this, the Gixxer also features a split seat, which definitely looks less commuterish than the Apache’s.

Engine & Transmission
The tables turn when it comes to the heart of the matter. The Apache is strongly ahead, being not only more powerful (by 2.4PS; 16.5PS @ 8000 rpm being the max output figure) and torquier by 0.8 Nm (14.8Nm @ 6500rpm), but by also being equipped with 4 valves and an oil-cooler. The Gixxer, as its 14.1PS @ 8000 rpm figure tells you, has ended up losing 0.7PS as part of its evolution - not good news, especially considering it is now 4kg heavier, although it still is 5kg lighter than the Apache. This power deficit has sprung up owing to the Gixxer’s motor being BS6-ready (but not yet complaint).

But the math is simple: even if TVS has to forego 1PS on the Apache in the process of BS6 compliance (not going to happen - we know how obsessive TVS is about its racing lineage, right?), it still will have the upper hand. In fact, it’s the Apache’s motor that is also more future-proof, given that it has already adapted to 4-valve tech and oil-cooling, which are things the competition will have to reach out for in time. Also, while both of these bikes feature a 5-speed gearbox, it’s the Apache’s that’s butter-smooth and the Gixxer, infamously, retains its borderline notchy gearshifts.

City Performance
But hang on - this spec-sheet superiority contest is only good enough for bar talk. What really matters is if these bikes, for all their tall claims, can get you hooked in the real world. To start on a bright note - they do. That the Apache is quicker is obvious, and while it is only half a second quicker from 0 to 60 kmph (5.04s; the Gixxer does it in 5.53s), in the dash from 0 to 100kmph, it is nearly a whole 5 seconds quicker than the Gixxer. In fact, with the 100kmph mark on the Gixxer coming up at 20.10s (15.36s on the Apache), it is substantially slower than… even the Gixxer it replaces! Ouch!

However, in the realm of the cityscape, the Gixxer feels anything but slow. From the onset, the Gixxer has been an immensely fun motorcycle and, despite the drop in power and the figurative bulge around its waistline, it’s lost nothing with regards to its enjoyable character. It’s instinctively, intuitively involving - and by that, I mean you will have fun on it with distinct ease, regardless of whether you’re riding it for the first time or, as in my case, being reunited with it after years, despite having ridden several dozens of faster motorcycles in the time that has passed. The commanding, upright, stress-free ergonomics definitely make a big contribution to this aspect but it’s the upbeat, responsive motor that really sets the tone. I found myself taking way too many liberties in traffic (none I can mention here, in case the cops are on the lookout) and, honestly, it’s on top of my list of fast-paced commuters. Although, I mustn’t forget to add that the Gixxer feels refined only under very gentle inputs; in most cases, the engine feels gruffer in comparison and that gearbox can misshift if you aren’t paying attention.

The Apache is almost the polar opposite. Its refined, almost over-refined, motor feels relaxed and unstressed despite being significantly quicker in reality. It’s fun, undoubtedly, but you get the feel of being on an over-engineered motorcycle - also understandable, given that this platform was originally developed around a 200cc motor. It’s got the zest to outpace every motorcycle in its class through traffic, but you feel the missing punch and character. The gearbox, thankfully, is super slick and it helps the Apache’s superior numbers translate to a serious advantage on the streets. What further softens the sensations is the mildly more committed riding stance; the flat-ish handlebar can also get a bit taxing if you have a long commute, especially with generous servings of bad roads. Riders above 5’10” will find themselves sitting ‘on’ the Apache rather than ‘in’ it (not the case with the Gixxer) and a more limiting factor is its larger turning radius thanks to the limited lock-to-lock steering movement and longer wheelbase. To summarise, the Apache is fast and very capable, but it’s just not engrossing or extroverted enough in character.

City Dynamics
Now, a strong motor is definitely an asset, but it’s incomplete without the ability to carve through congested city streets. And what about when the novelty wears off? Then, you’ll want to stick it out and still be happy about riding the same motorcycle, day in and day out, for years, right? Here, the contrast in their personalities only becomes more evident. The Apache is the more comfortable of the two, with its comfortable seat and pliant suspension, and it’s also the more poised handler, especially at higher speeds. The Gixxer’s friendlier ergonomics are countered by its stiffer suspension, and while the split-seat unit is stylish, it’s not as comfy for a very long riding day.

For carving through traffic, though, it’s the Gixxer that feels more responsive and rewarding. It’s far more chuckable, owing to its 22mm shorter wheelbase, 5kg lower kerb weight and, undoubtedly, the sticker MRF radial tyres. And although there is little evidence to suggest this on paper, the Gixxer’s chassis simply feels like it’s tuned to be more fun. The Apache is fun, but of a different kind. It feels more technical, more evolved and perhaps a bit too mature, and this perhaps comes from the fact that TVS takes its racetrack experience very seriously. The Gixxer comes across as more street-derived in comparison and while it lacks the finesse of the Apache, it feels more spirited, especially if you happen to be an enthusiast. On the brakes, too, it’s the Gixxer that’s got the stronger bite and better progression, although we won’t go over the braking distances since we don’t have the ABS version of the Apache on test.

Highway Performance
Regardless of whether you are a college-goer or a commuter, that these bikes will find themselves down the open highway, even if occasionally, is a given. Here, the Apache is more comfortable, faster and more tractable. The seat is definitely better suited to day-long rides and, most of the time, overtakes don’t demand downshifts. However, at the post-7000rpm mark, you do feel some vibes from the Apache’s handlebar, seat and pegs, which is not the case with the Gixxer. The Gixxer has the refinement edge at higher revs but, more importantly, it doesn’t cease to be entertaining, owing to its responsive motor and inherent agility. I found the Gixxer’s ‘sit in’ riding position to be more confidence-inspiring in a fast environment, especially when riding against a headwind or sidewinds. Although, while the Gixxer is undeniably more fun on impeccable roads, it’s the Apache that’s more versatile on varying road surfaces. On another note, and interestingly, despite the Apache being more powerful and heavier, it is the more fuel-efficient, logging 50.91kmpl in the city and 56.1kmpl on the highway, as compared to the Gixxer’s 50.58kmpl (city) and 49.7kmpl (highway). Given that both feature 12-litre tanks, it’s the Apache that offers the greater range.

Verdict
That these two motorcycles are pronouncedly apart in terms of character is, by now, an established truth. But is it as simple as the age-old ‘depends on what you like’ fix? Wouldn’t you rather get a definite answer? Agreed, motorcycles are intensely personal, but for everyday motorcycles that cost a lakh of rupees, the choice can’t be an irrational one. The Apache, at Rs 99,101 (ex-showroom), may be only a thousand bucks cheaper than the Gixxer with its Rs 1,00,212 price tag, but it is, without a doubt, the better machine. That’s a big statement when you consider Suzuki, TVS’ erstwhile partner, has been in the business of making motorcycles for far longer and that TVS, plausibly, learned a lot about making motorcycles from it. On the evolution front, therefore, the Apache (and TVS) remain undisputed.

And while the Gixxer is unquestionably more fun, its imperfections are more functional than a matter of subjectiveness. That LED headlight, for instance, is hugely unimpressive, lacking adequate intensity, and while it’s nice that it sports a beefy fork, the ride quality will be harder to live with on an everyday basis. If a purely involving riding experience is your biggest priority, then the Gixxer is a wonderful motorcycle to buy, but the better all-rounder with more bang for the buck is, without a doubt, still the Apache.