What better way to spend a hot and humid Mumbai day than tackling some off-road courses enveloped in a German precision machine? 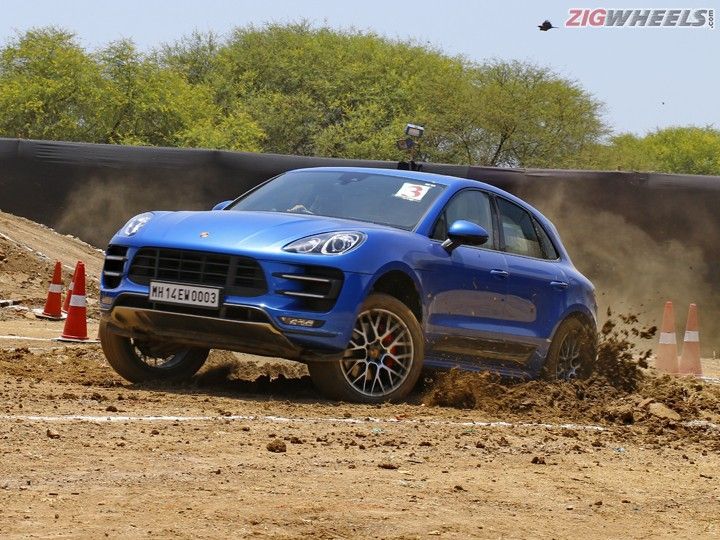 I know this thing is really fast. Just look at the figures: 3.6-litre with four hundred horses that can make the Porsche Macan Turbo dart from zero to 100kmph in under 5 seconds. It’s not a sportscar but an SUV.

With caution I made this compact, but mighty fast, Porsche crawl towards the starting line. There’s no tarmac in sight, and just a short stretch of straight murram road ahead of me.

Being a typical Mumbai summer afternoon, it’s really hot and humid on the track. Thank god I’m all cocooned up in this plush cabin, comfortably seated with the air-conditioning maintaining a cool 24-degrees. I’ve positioned the Macan for the short burst and am waiting for the marshal to give me a go-ahead. Who, by the way, despite the fancy sunglasses, doesn’t seem to be enjoying the sun tan a lot.

Meanwhile, it’s getting chilly in the Macan, or maybe it’s the excitement. I reduce the aircon fan speed and turn down the radio volume. Acres of leather and precision-milled German gadgetry envelop me in luxury, lending an even bigger sense of disbelief to what I was trying to attempt with this machine. Three-Two-One and it’s a Go… Wham! I feed the gas, but just enough so that the power surge from the Macan’s V6 petrol monster don’t make the wheels spin on the loose gravel. Woah! It’s seriously fast - the Turbo pounces forward with a roar, kicking a dust storm behind.

The two turbochargers ensure there’s not a moment of lag, while the 7-speed PDK transmission ekes out the best from the 400 horses. From the corner of my eye I notice the view from the window turn a yellow haze. And before I could complete my joyful chuckle, I had to hit hard on the brake to make the Porsche halt before the road ended. The dust storm catches up and engulfs the SUV, turning the blue Macan into your off-road junkie’s favourite reddish brown colour.

Mind you, all these happened in just a couple of seconds. This was just the first stage of the off-road endurance course created by Porsche India at Bandra-Kurla Complex, the business district of Mumbai.

The idea is to demonstrate that Porsche SUVs, essentially the Cayenne and the Macan, aren’t just a couple of soft-roaders created by the reputed sportscar maker, but high performance machines that can also tackle a fair bit of adventure with relative ease.

A sharp right turn led to a steep climb. But first I had to set up the Macan to go off road. Click of a button and I could feel the air-suspension increase the ride height making the chassis and brakes squeak appreciatively. Then, as I made the Porsche climb up the manmade hill, all I could see was the edge of the bonnet pointing to the bright blue sky, and the Macan’s Rs 1.1 crore price tag flashed in front of my eyes.

Safely over the crest, it was now time to roll down. Carefully modulating the pressure on the brakes I made the Porsche descend to even ground… only to hear the visibly irritated marshal bark on the walkie-talkie: “Blue car! Turn on the Hill Decent mode!” A little too late to realize that, apart from the Off-Road and Hill-Hold system, the Macan also has Hill Control system which takes over the brakes for you so that you can just focus on maneuvering the car without having to touch the foot pedals. Just trust the system and roll down.

This was followed some more severe rumblers, where I was reminded by the marshal yet again to go slow. Another sharp right over some mud and slush to demonstrate Porsche’s Porsche Traction Management (PTM) and permanent all-wheel drive system. Grabbing the opportunity I stepped on the gas to sling some mud and make the SUV slide. Couldn’t resist this great photo op.

Cautiously negotiating the chicken holes, I took on the next challenge - a 30-degree side incline which was a breeze. Only to lead to a double drop ditch – where the Macan went deep in a canal, came back to ground level, and disappeared yet again only to emerge back on top. This really was the tricky bit. It reminded me a bit like a dolphin swimming on the ocean's surface, but much, much slower. Remember the price tag? You don’t want to scrape the paint, do you?

Other tricky bits included positive and negative-side inclines and an axle-breaker patch. My inexperience in taking a Rs 1 crore Porsche off the road led to some belly scraping and heavy suspension thuds. I’m more used to cars like the Tata Safari Strom or the Mahindra Scorpio where the suspension is more suitable for bad roads and repair bills to my pocket.

But I wasn’t worried because these were not customer-owned Porsches, let alone mine. Being part of Porsche’s media fleet, the cars would be taken care of by Porsche themselves once the activity was over.

At the end, I can say that it was a hot afternoon well spent. After all, bashing a Porsche Macan off-road is clearly more interesting than rattling on a keyboard sitting in office.

After this rather adventurous and expensive experiment we’ve discovered that the Macan not just looks gorgeous and is staggeringly fast, but it's also capable enough to take on some pretty serious beating, all the while cosseting you in supreme luxury. So here's a piece of advice - yes, the Macan can off-road, but that doesn’t mean you should.