We get to indulge in the super exclusive Mercedes-Maybach S600 for a day, and realise, it makes regular S-Class look...regular. Priced at Rs 2.65 crore minus taxes, it’s twice the cost of an S-Class. The Maybach isn’t for every one... 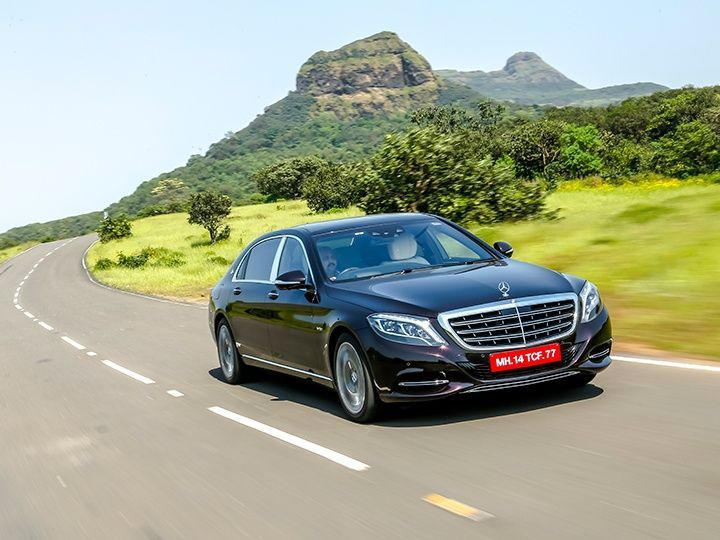 With Rolls Royce and Bentley lapping up a major chunk of the uber luxurious limousine market, the German automobile giant Mercedes-Benz has been eyeing, if I may add, the ultra exclusive and lucrative segment for a while now. Not too long ago, the parent company Daimler resurrected the premium Maybach marque from its ashes, during the 2015 Geneva Motor Show in March this year, making it the sub-brand of Mercedes-Benz.

Talk about laying a strong foundation --- the S-Class, as we know, is termed by Mercedes as the ‘Best Car in the World’. So, the idea behind the new-age Maybach is to use the latest and highly acclaimed Mercedes-Benz S-Class platform and create an even more up-market and opulent model, to tease the pallet of the crème-de-la-crème.

It’s a really long car, which makes an impressive statement at first glance. One glance and you find a striking resemblance between the new Mercedes-Maybach S600 and the S-Class. The front is extremely similar to the S-Class --- like its face and headlights, with just the redesigned grille and bumper setting the Maybach apart. In fact, it still carries a Merc TriStar emblem on the bonnet, instead of the more premium Maybach badge; which is a disappointment. As expected, the rear design also has reminiscence of the S-Class and comes without the Maybach ornamentation on the boot.

The brilliant proportions on the side of the Maybach give it a lasting impression. This thing is big… long to be more accurate. So, the S-Class platform has been stretched by another 207mm and its rigidity has been reinforced further. Just notice the size of the rear doors and how the third window spills over till the C-pillar. And the final touch are the special 19-inch alloy wheels, which can be upgraded to meaner 20-inch ones.

It’s more elegant than the now seemingly modest S-Class, and puts a stretch limo to shame with its magnanimous five and a half metre length and close to 2.5 tonne kerb weight!

To compete with the likes of Bentley Flying Spur and the Rolls-Royce Ghost, Mercedes has utilised all their knowhow to make the cabin of the Maybach S600 a really special space. The existing Mercedes-Benz S-Class is already a well appointed car, with every conceivable feature on offer, but in the Maybach, the German firm has gone ahead and excelled.

Finest choice of Nappa hide, pure wood and quality metal, gives the S600 the right blend of opulence, the Maybach clientele desires. The cabin reeks with top-class build quality. Every dial and button gives out a reassuring ‘click’ sound when adjusted, much to the pleasure of a connoisseur.

Being a motoring journalist, I sat behind the wheels instinctively – something which perhaps most of the Maybach owners will never do, since they prefer chauffer driven cars. The driver’s seat is extremely comfortable, and comes with a massage option too. So, it’s not really a bad place to be in, especially since you have the reins of the monstrous V12 motor. More on that in a bit.

Moving to the rear rest, things get more interesting here. Our test car came with the ultra luxurious and, mind you, optional rear seat package which makes the most comfortable lounge chair seem like Judas Cradle (don’t Google it, if you’re faint-hearted). The pair of single rear seats of the Maybach are super cushy bucket seats, with the right amount of support at all the right place. And yes, it comes with a range of massage options too, including the ‘can’t get enough of’ Hot Stone massage function.

Presuming that the owner will grace the left rear seat, most of the pampering is concentrated towards it. This includes a button that pushes the front co-driver seat further ahead, making more room for the rear passenger, while the backrest of the rear seat reclines up to 43.5-degrees to create a comfortable lying position. Magically, the seat’s under-thigh extensions rise up to offer support to the legs, while an ottoman rolls out to rest one’s feet on. With soft head-rest and so much indulgence and cosset, it’s hard not to feel royally pampered.

The cabin is smartly designed to ensure that the rear seat backrest is positioned behind the C-pillar, allowing more privacy to the Maybach owner. Moreover, it is so well insulated that the S600 is one of the quietest cabins we’ve been in recently, and it manages to shield the occupants from the usual traffic chaos outside.

The electrically adjustable rear seats come with memory function, with cooling and heating options, depending on the weather outside. Backseat passengers also get their own 10-inch displays with remote and wireless headphones as part of the personal entertainment package. And there’s this high-end 1540-watt Burmester 3D surround sound system with 24 speakers.

There’s a huge list for the driver’s aid: 360-degree camera, Active Parking Assist with Parktronic system that can automatically steer the vehicle into parking spaces. Features like navigation, telephone, audio, video, internet compliment the new COMAND Online system. Making a special appearance on S600 is a heads up display and split view function on the screen situated on the centre consol. There are driving modes and even the ride height is adjustable to suit every possible road condition.

The seven different colour options for the ambient lighting look really cool at night. And it did enhance my drive through the numerous tunnels on the hilly road to our shoot location. The other interesting feature is the panoramic sunroof with MAGIC SKY CONTROL that gives the glass roof a tint to make the cabin cosier. And lastly, we discovered the AIR-BALANCE package, as we popped open the glovebox. This system not just keeps the air in the cabin clean but also offers five different fragrances to suit personal preference and mood, including Agarwood fragrance designed especially for the Maybach S-Class.

At the back, owners have the option of getting a small fridge installed, or better still, use the thermo coffee cup holder on the rear armrest. This turns blue as it cools your drink or red if you want it to keep your coffee hot. There’s also a foldable tray which can be used for small things, such as signing ten digit cheques.

Powering the Mercedes-Maybach S600 is a V12 petrol motor, and the luxury car maker has made it a point that this is noticed by strategically placing several V12 brandings, including a couple on the rear passenger seats. This is the first Mercedes in India to get the 5,980cc biturbo petrol motor, and there couldn’t be a more deserving car than the Maybach S600.

The 6.0-litre engine develops 523PS or peak power and has a torque rating of 830Nm. These humongous figures are delivered to the rear wheels through an automatic 7-speed speed transmission.  At the push of a button, it cranks up with a beautiful V12 baritone from the exhausts that suit a dignified car of this demeanour. I couldn’t resist but to rhythmically tap on the accelerator in neutral which makes the car sway from side to side, as if enchanted by the throaty exhaust tune.

Even with its weight and huge size, the Mercedes-Maybach S600 can be called anything but sloppy, claiming a 0-100kmph in just 5 seconds. Though in the real world it might take a second more to hit the tonne, but it’s not slow by any imagination. The gearbox further compliments the smooth nature of the V12, with its seamless shifts. Perhaps the only letdown is that the ‘box doesn’t respond as quickly as you would have liked.

Am not sure how many prospective Maybach S600 clients will be interested in this, but it did manage to return close to 4kmpl in the city, with the best average fuel efficiency of around 5.3kmpl.

It’s a petrifying thing to drive within a city like Mumbai or Pune. Especially when waiting for the traffic signal to turn green. With every motorcycle or three-wheeler coming dangerously close while trying to squeeze through the gap around the Maybach, I could visualise the hefty Rs 2.65 crore flashing in neon lights front of my eyes. Am certain, most Maybach chauffeurs must be popping pills to cure hypertension.

Once out on open roads, Maybach S600 soothes yours senses with its linear power delivery and creamy torque. It’s a car you don’t feel like pushing to the limits or throwing around corners. Not that it will ever disappoint, but it’s way too elegant for such behaviour. The air-suspension and Magic Body Control function work in harmony to soak up most of the road undulations.

In a straight line, the Maybach is really impressive, and around fast and sharp corners the length, weight and body-roll cannot be ignored. Switching from Comfort to Sport mode does reduce the body-roll, adding more weight to the steering and squeezes out more juice from every gear. But it feels best cruising, even at three digit speeds, on the highway or transporting owners from their villas to luxury hotels or swanky offices.

It’s a beautifully crafted saloon. One that will caress, soothe and pamper your sense. It cocoons you with the best of things and keeps the madness of the world, where it belongs - outside the car. The Maybach costs twice as much as a regular S-Class and does have a distinct brand appeal like its competition, say a Bentley or a Rolls Royce. But if you have the money, and thinking of buying an S-Class, then this is the super exclusive version you should buy to set you apart from your business rival.