The refreshed Mercedes-Benz E-Class Cabriolet gives the joys of open-top motoring in a strong twin-turbocharged V6 cruiser. How cool is the E Cabrio and is it worth all the money it comes for? Read on to find out 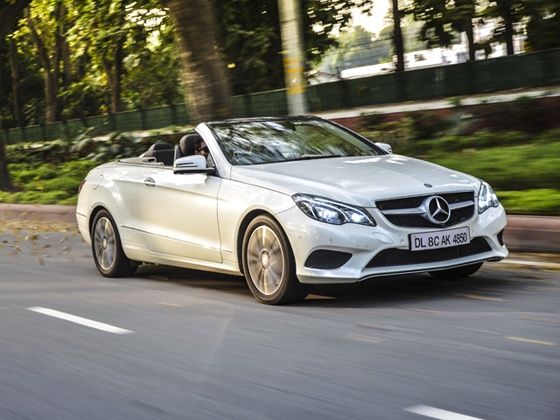 There’s nothing quite like a convertible if you want a car that turns heads and I realize that the minute I drop the top down of the Mercedes-Benz E-Class Cabriolet. It’s early morning just before sunrise as I drive down Rajpath with India Gate in sight when I drop the canvas top of the Cabriolet. Joggers are drawn to the long two door Mercedes in what happens to be just the ideal weather for a convertible. It is not quite often that one does get to experience open top motoring in India but when one does, the infatuation comes quick.

The E Cabriolet isn’t a new car though. What you see here is a facelift much in line to the E-Class sedan. The sedan got an extensive nip-n-tuck in 2013 which was followed by the same treatment to the Cabriolet but Mercedes chose to get the Cabriolet only now to India. It’s not going to be the volume spinner for Mercedes so the delay in understandable.

The E-Class Cabriolet is actually built on the previous generation C-Class platform so while it looks similar to the E sedan, the car is considerably smaller. The design cues from the E-Class mask that lack of size pretty well though. The E-Class Cabriolet gets the single headlamp cluster in this refresh. It is sharper and more angular and leads into the large single slat grille that differentiates it from the two-slat sedan. The bumper is new as well, edgier than before with larger air intakes.

The rear three-quarter is where the E Cabriolet gets its own identity. The long single door on each side rises up with the belt line into the neatly curved rear section with its top down. It is definitely the most attractive angle to view the Cabriolet from. The taillamps get an eye-catching set of LED strips and plenty of chrome. With the roof up though, the rear doesn’t look as good as I’d like, which could be because of the colour combination our test car came in. The blue fabric roof with the white car could be a better blend. It’s worth the 20 seconds to tuck that roof in though if you want to look good.

The biggest compromise in a Cabriolet is space. With the E Cabriolet though, it’s a lot less compromise to make. The front seats are wide, comfortable and electrically adjustable. There’s even adjustable bolstering for your thighs and back to get that perfect driving position and comfort. With the roof down, visibility off the driver’s seat is excellent. The E-Cabriolet is as easy to drive as any around town.

When it is up though, visibility in the rear view mirror is poor as is out of the back when you are taking sharp turns. I’d assume that it’s better than any other convertible you can buy though. A proper rear window is needed in the E Cabriolet for the length of the car and since it is obviously pillar-less, you do get a large greenhouse.

The rear seats are a snug place to be in. Adults can sit in the back but not very comfortably, but then again, not many convertibles can boast of the kind of space the E offers. The rear passengers do get a set of air-con vents though. There’s also 390 litres of usable boot space with the roof up. It goes down to 300 litres and a narrow opening when the fabric top is tucked in.

The E-Class Cabriolet comes well equipped with two zone climate control, rear AC vents, seat memory, seat bolstering, front and rear parking sensors with 360 degree parking assist and a rear parking camera and automatic parking, paddle shifters and for the first time for Mercedes cars with a COMAND System, Mercedes Benz Apps. Applications like Facebook and Tunein radio can be accessed on the 7-inch multimedia screen with your phone connected. In fact all cars with the COMAND system are due for this update in India. A high quality 14-speaker Harman Kardon surround sound system is standard on the E Cabriolet as is satellite navigation and a set of nine airbags.

The E-Class Cabriolet on sale in India is the E400. This is the biggest update to the car. Previously, the E Cabrio sold in E350 guise housed a 3.5-litre naturally aspirated V6 petrol motor. This car has a twin-turbocharged 3.0-litre V6 under its hood. This new mill pumps out a healthy 338PS of peak power between 5250-6000rpm and 480Nm of peak torque from 1600-4000rpm. There’s plenty of punch all through the rev range. While the turbos and the wind noise dampen the shrill of the V6, when you do get going, the soundtrack is quite enchanting.

The E Cabriolet isn’t an out-n-out sports car though, but the relaxed nature of the engine-gearbox combination is quite nice. We would have liked the seven-speed auto-box to shift quicker and hold gears when in Sports mode but it doesn’t and that makes the E400 more of a quick cruiser than an enthusiast’s car.

It’s got considerably more power and torque than its predecessor so if you are familiar with the old 3.5, the new E will be quick enough for you. It can do the 0-100kmph sprint in 5.3 seconds despite the rather heavy 1845kg kerb weight.

Soft setup of the suspension makes the E Cabrio a delight in the city. It soaks in bumps well despite the low 45 profile tyres. The ground clearance is low so one needs to be careful over speed humps. Mercedes doesn’t offer adjustable suspension in the Cabriolet but it does get Agility Control that firms the dampers a bit when you drive faster. It doesn’t get stiff enough at highway speeds though so exercise caution over expansion joints and large undulations.

With the roof up, the fabric doesn’t isolate occupants from the wind noise as well as I would have liked. It also creates plenty of blind spots around the rear three-quarter region and the wind deflector between the rear headrests obstructs view in the inside review mirror.

Chassis stiffness does take a beating with the roof chopped off. While the Cabriolet receives additional floor and side strengthening, it does tend to roll and flex into corners. The Michelin Primacy HP tyres are more comfort and touring oriented so push them hard into corners and they squeal soon enough before the traction control kicks in and stops the rear from stepping out. The brakes are strong and progressive though to keep the Convertible in check.

Efficiency will not be much of a concern to an E400 Cabriolet buyer but if you must, easy cruising at about 100-120kmph can get you about 12kmpl. Push it hard and this number will fall considerably but a 66-litre fuel tank gives a decent range to the car so you aren’t stopping too often at petrol pumps. It is priced at Rs 78.5 lakh, ex-showroom Delhi which we think is on the higher side. There’s no direct competitor for the E-Class Cabriolet for the set of strengths it possesses but if you are looking for a convertible at this price point, the BMW Z4 can give the E Cabrio a run for its money.

The Mercedes-Benz E-Class Cabriolet is a unique car. It charms you with its design and enthralls with its engine. It offers space like no other convertible you can buy and comes equipped to the gills with features. But the E Cabrio isn’t sporty enough to complement the strong turbocharged V6 and it is priced a bit too steep for our liking. This Mercedes drop top turns a lot of heads though and only a Delhi Socialite or a Mumbai celebrity could put a price tag to the attention it gets. And that is the winning play of the E Cabrio in this refreshed avatar. Few will buy it but those who do, will enjoy the shutterbug’s attention.