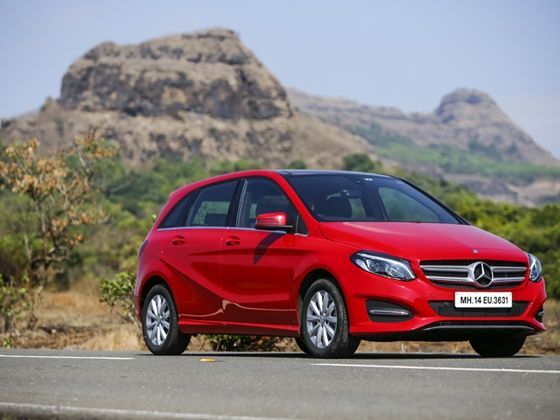 Marketed as a compact sports tourer, the first generation Mercedes-Benz B-Class was introduced way back in 2012 for just Rs 21.49 lakh. An amount unheard of, while talking about new Mercedes cars. And this move not only brought the premium German marque within the reach for many, but pretty much kicked the hornet’s nest, resulting in a blitzkrieg of compact luxury cars in India from every other luxury car makers present in India.

The hatchback, after receiving a few nips and tucks, is back as the 2015 Mercedes-Benz B-Class and is offered with the same reliable 120PS, 1.6-litre petrol engine and an upgraded diesel engine. We get behind the wheels of the C200 CDI powered with a new 2.1-litre motor, straddled with 26 horses more than the outgoing engine.

Despite undergoing a minor facelift, the 2015 Mercedes-Benz B-Class has increased in length by 34mm. This is mainly due to a pair of well sculpted new bumpers. There is also a new two-slat chrome grille proudly holding a large Tristar badge. Also making a debut on this affordable Mercedes are full LED head lamps which look cooler than before.

There’s nothing new to talk about the facelift B-Class’ side profile except the taller 16-inch wheels, that replace the older 17-inch tyres, which definitely doesn’t add to the overall appeal but will definitely improve the ride quality. At the back, the new Mercedes-Benz B200 CDI gets smart looking chrome highlights around the exhaust tips to reinstate its new sporty theme.

There’s good thought gone in to make the 2015 Mercedes-Benz B-Class appear sportier than before, but it’s not as attractive as the A-Class and reminds us of the long gone Mercedes-Benz R-Class.

The basic interior layout of the B-Class is retained in the 2015 version, but there are some welcome additions, like a new Mercedes-Benz C-Class type steering wheel, along with a sporty instrument console and new colour screen for the trip metre.

It’s the usual Mercedes’ affair with soft touch materials and craftsmanship, with great quality of metal buttons, aircon vents and a trendy brush metal strip on the dashboard. There are other bits too borrowed from its siblings Mercedes-Benz CLA, like a larger high-resolution colour screen and the latest COMAND operating system.

The standard car is also pretty kitted up and comes packed with a Bluetooth, cruise control and a couple of USB ports. The B200 CDI also gets an electrically adjustable driver’s seat, panoramic sunroof, a rear-view camera with parking sensors, apart from the seven airbags and a bunch of safety features including Electronic Stability Program, ABS, Hill Start Assist, Brake Assist with Adaptive brakes and acceleration skid control (ASR).

The biggest selling point of the luxury hatchback is the spacious cabin, comfortable seats and great knee room at the back. Pop open the boot and there’s excellent boot space of 488-litres, but in India the spare wheel eats up some of the valuable space.

The more powerful Mercedes-Benz B200 CDI has ousted the B180 CDI,previously sold in India. Sporting a 2.2-litre diesel engine, the 2015 Mercedes-Benz B-Class makes 135PS, which like we mentioned, is 26PS more than before with a handsome 300Nm of torque.

The first thing that strikes us is the refinement of the 2015 Mercedes-Benz B-Class, with hardly any engine, wind or tyre noise filtering in to the cabin, even while maintaining the three digit speed. And the new engine also feels swifter reaching the 100kmph mark and effortlessly holds the above mentioned three digits, with a limited top speed of 210kmph.

The motor is mated to a seven-speed dual clutch transmission which can be controlled with steering mounted paddle shifters to power the front wheels. The gearbox fumbles at times at slower speeds, but irons out and becomes more intuitive as the 2015 Mercedes-Benz B200 CDI gathers speed.

Apart from the Manual mode, where you get to use the paddle shifters, there is also the usual Sport mode which makes the acceleration and gearshift more alert, and the Eco mode with Start/Stop function which can help stretch a litre of diesel for over 20kmpl on the highway. However, the new engine doesn’t make this ‘compact sports tourer’ more sporty, but surely give it the useable power to be a dandy tourer.

The same goes for ride and handling, which aren’t really sporty but firm enough to remain flat around quick corners. The good thing is that the 2015 Mercedes-Benz B-Class retains the older models’ increased ground clearance and suspension setup revised for India. And adding to the comfort, the B200 CDI runs on higher profile 16-inch wheels, which also improves the ride quality to a certain extent. But since the setup still is on the firmer side, some severe bumps tend to thud through the cabin and it even feels bouncy over bad patches of road.

The 2015 Mercedes-Benz B-Class looks dapper, and comes with better equipment and has one of the best diesel engines the company has to offer. The biggest draw it has over competition — which also includes its handsome sibling the A-Class — is its cabin space, useable rear seats and generous boot space. The petrol version now costs Rs 27.95 lakh, while the 2015 Mercedes-Benz B200 CDI we drove will set you back by Rs 28.95 lakh for the diesel (ex-showroom Mumbai), bringing it close to the more practical Mercedes-Benz GLA compact-SUV which costs just another Rs 3 lakh more.